Derek Hunter
|
Posted: Jul 01, 2018 12:01 AM
Share   Tweet
The opinions expressed by columnists are their own and do not necessarily represent the views of Townhall.com. 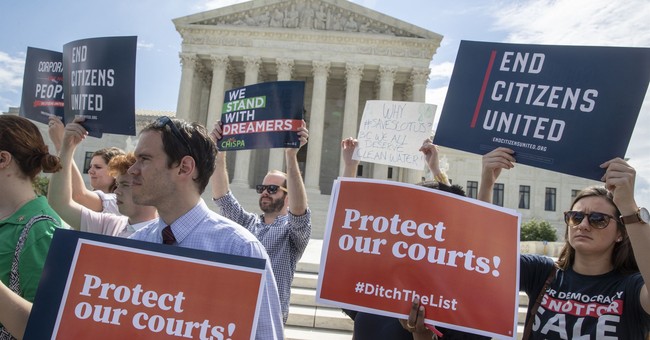 Who doesn’t love it when a good plan comes together? More than that, who doesn’t love it when their opponents’ own actions come back to bite them in the butt? Both of those things came to a head this week when Supreme Court Justice Anthony Kennedy announced he was calling it a day, opening up a second seat on the high court for President Donald Trump to fill. The announcement caused liberals to lose what was left of their collective mind.

The plan was to elect a Republican president; a box the American people checked by rejecting Hillary Clinton. The butt-biting was that Democrats were so irrational at the success of that plan that they effectively disarmed themselves by using the last obstructionist tool they had – the filibuster – leaving them with nothing but anger and regret.

When President Trump nominated Neil Gorsuch to replace Antonin Scalia, Democrats had a choice – oppose, but allow the confirmation of a conservative judge who wouldn’t change the ideological make-up of the court, or go nuclear to appease their rabid base. They chose the latter, effectively leaving them sitting on the sidelines in any future Supreme Court nominations while they remained in the minority.

There was no reason to attempt to filibuster Gorsuch, they knew it would lead to the full “nuclear option” they had exercised when they were in the majority. With the balance of the court not in play, their actions were inexplicably stupid.

It’s important to note that Republicans would have simply ended the filibuster of Supreme Court nominees on the vote to replace Kennedy, had liberals not blown their wad already. But waiting till it could matter to the make-up of the court would have at least given Democrats a public relations weapon to use. Instead, they disarmed before the fight that matters began.

Now they’re left with emotion, their favorite but least effective tool when it comes to appealing to non-liberals.

Led by Hollywood, a veritable clown car of the political left has been in a constant state of pearl-clutching all week. Director Rob Reiner tweeted, “The illegitimate POTUS will now try to ram a SCOTUS nominee through before Nov. So much for that McConnell rule. Calling on two principled Republicans to stand up against tyranny.” Who knew “Meathead” was typecasting?

Former actress Alyssa Milano (maybe she’s still acting, I don’t know, I just know she’s not doing anything people want to see ) tweeted, “TRUMP SHOULD NOT BE ABLE TO CHOOSE A LIFETIME APPOINTEE WHILE HE IS UNDER FEDERAL INVESTIGATION. FULL STOP.” You can tell she’s serious because she used caps lock. Of course, her husband reportedly works for the talent agency that served as Harvey Weinstein’s “complicity machine,” so she has an incentive to become a liberal darling.

Michael Moore was on with Stephen Colbert talking about how he cries when he reads the news and how liberals have to be willing to “put our bodies on the line” to stop confirmation of Kennedy’s replacement. If he leads by example he’ll be able to stop a train, but he won’t be able to stop the Senate.

The intense hatred of the left and the irrational actions that come along with living in that emotional state caused the party to use their last great weapon before the battle that mattered even started. I love it.

Napoleon was quoted as saying, “when the enemy is making a false movement we must take good care not to interrupt him.” Republicans followed this advice to a T. Now Democrats are left with what I wrote my book about – emotion, anger and fear. They are attempting to deploy both on every issue.

The thing about an angry mob with their emotions “turned up to 11” is they can’t live there indefinitely. The likelihood of more left-wing violence is real and growing daily now because Democrats are trying to keep everyone emotional over a dozen things at once. The last 2 weeks’ worth of Supreme Court decisions, the Kennedy retirement, the border, ICE, health care, taxes, Trump’s existence, etc., etc., are all “WE’RE ALL GONNA DIE!” moments to the mob. Rage is hard enough to direct, rage against everything is impossible to control.

This leaves liberal leaders drifting in the wind like a plastic bag, desperately trying to focus all the mob’s attention on the Supreme Court vacancy. But all the drooling Chris Matthews monologues in the world won’t be able to convince people who’ve bought into what’s happening at the border is Hitler, or that the tax cuts were Hitler, or there are Russians behind every bush and are Hitler, or whatever else they’ve labeled as Hitler recently.

When you’re mad at everything it’s hard to focus on just one thing, no matter how important that thing may be. Democrats shot themselves in the foot when they overreacted to the Gorsuch nomination, just as they shoot themselves in the foot when they overreact to everything. All they have to show for it so far is a string of losses and an unfocused, angry mob. They’re counting on that angry mob to carry them to electoral victory in November, but a second Trump newly appointed Supreme Court Justice confirmed right before the vote could just dishearten that mob or push them past the point of no return. Either way likely won’t be good for Democrats. Which means, as long as it’s not mob violence, it could be good for everyone else.

Pick up a copy of my new book, Outrage, INC.: How the Liberal Mob Ruined Science, Journalism, and Hollywood, to learn about how the left-wing manipulation machine came to be, how it works in all areas of society to keep people angry and afraid to prevent them from thinking rationally. The only way to defeat it is to fully understand it.