Derek Hunter
|
Posted: Jan 04, 2018 12:01 AM
Share   Tweet
The opinions expressed by columnists are their own and do not necessarily represent the views of Townhall.com. 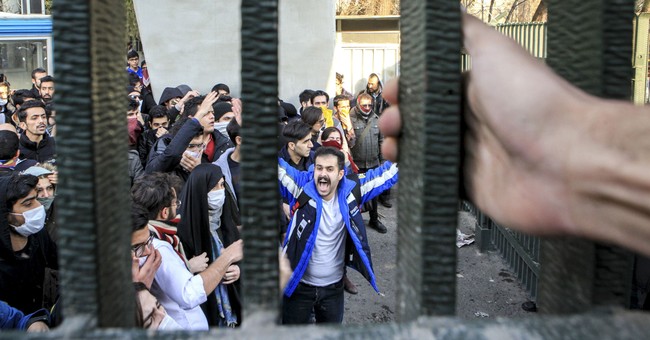 As protests in Iran roll into a second week, liberals are very worried about one: they might work.

It’s an odd position for Americans to be in, hoping an oppressive regime stays in power, yet that’s where they are. From the moment protests started the media was reluctant to cover them, basically ignoring them for the first few days. This could be blamed on the holiday, a lot of people were off for New Year’s Eve, but there were people working, newspapers were printed and live news programs were produced. So why the initial disinterest?

One of the biggest failures of the Obama administration was their dealings with Iran. Not just the nuclear deal – which was a singular failure of historic proportions – but also all the lead up to that mistake.

The Obama failures on Iran started with the “Arab Spring.” Remember that? People across the region rose up against their oppressive governments to demand change, to demand more freedom. And what did the Obama administration do? They expressed support for the protesters…in two countries that were zero threat to the United States – Egypt and Libya – and remained pretty much silent about the movement elsewhere, especially Iran.

Yes, a few weeks later, after it was too late to matter, they did express support, which is like declaring yourself a New England Patriots fan after the Super Bowl.

But the President said nothing when it could have mattered most. Why?

Well, as it turns out, President Obama was afraid of speaking out because he feared it might derail his ambitions for an overall nuclear deal. The administration was hoping to cut a deal with the terrorist regime as a legacy item, and any support of opposition to their theocratic government might offend them to the point that the Iranians might walk away.

This betrayal of the concept of liberty by President Obama wasn’t even his worst capitulation. As it turns out, there was no bottom to how low he would go to “win” an agreement, even obstructing criminal investigations into Hezbollah out of fear his legacy item might not come to pass.

Imagine a President of the United States protecting a terrorist group engaged in money laundering and drug smuggling because he wanted a deal with their political patrons. Keep that in mind whenever you hear a Democrat decry the opioid crisis in this country.

Now that Donald Trump is President there are many Obama legacy items running risk of being obliterated. While dismantling Obamacare has gotten a lot of the press, few things concern Obama loyalists like the Iran deal.

That’s why liberals had such a viscerally negative reaction when Trump tweeted, “The people of Iran are finally acting against the brutal and corrupt Iranian regime. All of the money that President Obama so foolishly gave them went into terrorism and into their ‘pockets.’ The people have little food, big inflation and no human rights. The U.S. is watching!”

Out of the woodwork, liberals came crawling to tell the President to, as the New York Times put it, “be quiet,” or find other ways to try to ensure that if anything good comes from these protests that Trump get zero credit for it. The narrative is proactively being set to defend the Obama legacy, as much as failure can be spun as a victory.

Susan Rice, noted for her ability to lie on every Sunday show in a single day, helped spread the Times’ piece, while others took a more direct approach.

Former Secretary of State John Kerry didn’t mince words when he declared that whatever happens has nothing to do with Trump when he tweeted, “With humility about how little we know about what's happening inside Iran, this much is clear: it's an Iranian moment and not anyone else's.” This “Trump has nothing to do with this” mantra is subject to change should things go sideways, of course, then it will all be his fault.

Frustrated novelist turned “Obama’s foreign-policy guru” took the approach many liberals have, attempting to conflate what’s happening in Iran with President Trump’s travel restrictions. Rhodes tweeted, “The Iranian people who Trump wants to bar from the United States even if they want to come to study, work or visit loved ones.”

It was a horribly unoriginal idea, likely stolen from “civil rights activist” Linda Sarsour, who tweeted the day before Rhodes, “Is it just me or is Trump praising Iranian protesters AND at the same time also banned Iranians from entering the USA?”

Of course, this line of attack is profoundly stupid, which is why it’s so popular among liberals. Iran is on the banned list because of its government and their sponsorship of terrorism, not because someone threw a dart at a map. Its citizens taking to the streets aren’t looking to flee, they’re looking to change their country so they don’t have to.

But anything regarding Iran must be spun as a negative for Trump to maintain the contrast with Obama. It’s not that liberals want the people of Iran to remain oppressed, it’s that they’re willing to have that happen if it protects Obama’s legacy.