Is There Nothing Republicans Can’t Screw Up?

Derek Hunter
|
Posted: Nov 12, 2017 12:01 AM
Share   Tweet
The opinions expressed by columnists are their own and do not necessarily represent the views of Townhall.com. 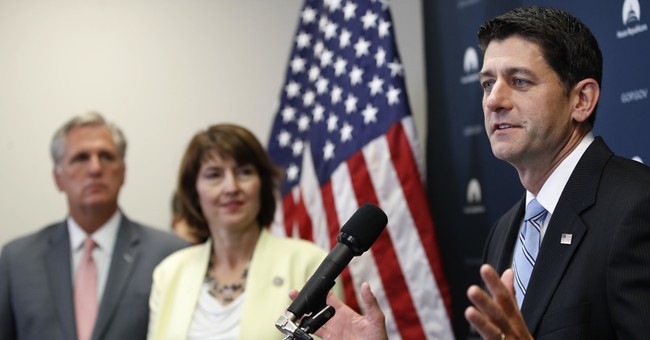 If you’d told me last year that complete Republican control of Congress and the White House would lead to nothing getting done, I would have laughed at you. Of course, last year I would have laughed at the idea of complete Republican control of government, so the idea of no legislative accomplishments would have been a joke not worth telling. Turns out all the jokes, at least so far, have been on us.

That Obamacare repeal fell apart – or, more correctly, never really got off the ground – was a surprise only because Republicans had promised it for years only to have it exposed that many of them didn’t really mean it. They were like the high-rolling poker player who’d just had his bluff called by a rank amateur – they’d painted themselves into a corner. Republicans always have been afraid of health policy as an issue, just as Democrats have little to say on national defense, because only a few actually know the details.

Republicans know how to complain about health policy – it’s not hard when the problems are so obvious. But few truly meant repeal because only a few truly believe the federal government shouldn’t be involved in controlling the health insurance industry. The rest think the government should “do something” to lower costs and don’t understand that this is not what happens when government gets involved.

In other words, they campaign a good game about the free market; they just have no idea what those words mean.

On immigration, it’s the same old thing – tough talk, then a slow dance where they try to feel us up.

Congress is scrambling to “protect” the so-called DREAMers from the consequences of their parents’ actions and, in the process, moving toward giving away the store.

I’m not opposed to letting many of them stay – those who graduated high school, went to college, have a job, or served in the military. But if they didn’t graduate by the age of 19 (since, apparently you can go to high school nearly forever now), or have committed any crime, they have to go. And chain migration for them should be non-existent, as it should be for everyone else, along with birthright citizenship.

But it’s looking like none of that is going to be on the table. Not enough Republicans have the courage of their campaign convictions. They’ll cave and grant full amnesty for all DREAMers in exchange for nothing. OK, not nothing – they’ll get Democrats running ads calling them heartless racists who want to deport everyone or run them over in pick-up trucks.

Which brings us to tax reform.

You’d think if there were one issue on which Republicans were not only solid, but able to message successfully against the left, it would be taxes. You’d be wrong.

The mantra “We’re going to make filing taxes easier” isn’t exactly T-shirt worthy, yet it’s the best they’ve come up with. Here’s a little secret for congressional Republicans: The biggest “pain” in filing taxes is paying them. The vast majority of people take the standard deduction, so the act of filing taxes already is plug-and-play.

Whoever thought “simplifying the tax code” was a great selling point should be fired.

People want to keep more of the money they earn; they don’t care how they do it. Simplification is a horrible message. And in typical Republican fashion, Democrats already have managed to outmaneuver them by finding what they always find – examples of the worst-case scenario and presenting them like they’re the norm.

Republicans made the mistake of playing the game on Democrats’ terms. The GOP wanted to “pay for” tax cuts by making them revenue neutral. That meant rather than just cutting them, they had to play a bunch of accounting games and gimmicks. Taking away this deduction, limiting that one. It was dumb.

People oppose the death tax not only because it’s fundamentally unfair; they also don’t want their family to pay it. Very few will ever come close to amassing a large enough estate to worry about it, but fewer realize that. Although the overwhelming majority may end up paying slightly less under the GOP plan, they all fear they’ll end up paying more. This is because Republicans aren’t simply lowering rates, they’re playing games in the hope the Democrats and the media will get on board. That is never, ever going to happen.

The tax code is a complex monster, and taming it would be good. But people don’t care about loopholes; they care only about paying less. Republicans, since they don’t have the will required to scrap the code and replace it with a flat or fair tax, should simply lower rates across the board, no caveats. People understand that.

When you’ve got members of Congress going on TV to tout lowering the corporate tax rate, you’ve lost.

Cutting the corporate tax rate would be a boon to the economy, but that’s a secondary ripple a year or two out. It should be included; it shouldn’t be a selling point. People want more money in their pockets. Everything else, beneficial or not, is window-dressing.

Republicans are likely to continue their legislative losing streak because they’re afraid to govern on the principles they were elected on out of fear of losing their offices. If they continue to fail to do so, voters will relieve them of that burden.