Governing For The Lowest Common Denominator

Derek Hunter
|
Posted: Jun 29, 2017 12:01 AM
Share   Tweet
The opinions expressed by columnists are their own and do not necessarily represent the views of Townhall.com. 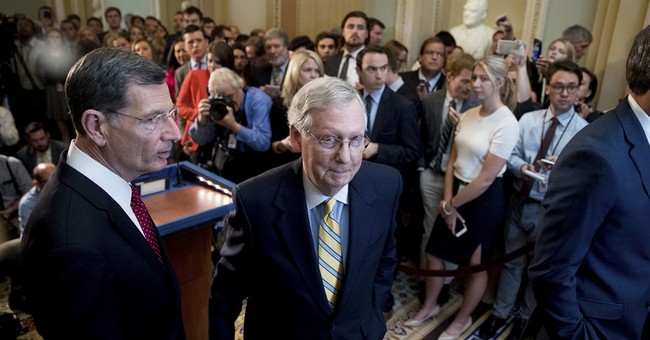 Well, the Congressional Budget Office score for the Senate health care bill is out, and it’s pretty much what was expected – not all that different from the House bill. It’s not all that different from Obamacare, either, which also was not unexpected. In essence, we’re now living in a country where the federal government is the provider of health insurance, one way or the other.

In their usual, rational way, Democrats are running around screaming the Republican health bill is going to kill people. How? Because the majority of the supposed millions of Americans who will “lose” health insurance would do so by choice, a fact the media can’t be bothered to point out.

In union membership and now health care, the American left is horrified at the prospect of voluntary participation. Don’t want to join a union? Tough. Shut up and pay. Don’t want to buy health insurance? Tough. Shut up and pay. It’s yet another example of how the party of “choice” really means to extend choice only on abortion, with everything else to be dictated by faceless bureaucrats.

Who could know more what’s best for you and your family than an unelected drone toiling toward a generous pension you and your kids will have the privilege to pay?

Can I just say something heartless? I don’t care if people choose not to buy health insurance. It’s their lives – they should be free to gamble year by year that they won’t get sick. If they don’t, they win. If they do, they lose.

That loss has to be coupled with serious consequences – including massive debt and the possibility of losing your home and/or future income. And I don’t care which way it goes for them.

There are so many subsidies and programs to encourage people to buy insurance. If someone rejects the idea, who cares?

It’s your life – ruin it however you choose. Just don’t expect me to pick up your slack when things go wrong.

You’re buying piece of mind against something bad happening. If that’s not enough incentive for someone to act responsibly, why should anyone else care if you find yourself under crushing debt from a bad bet?

Obamacare and now the Republican plans seek to insulate people, to one degree or another, from their bad bets. Subsidies and expanded government programs are tossed around to entice people into acting smart. No government should legislate based on the dumbest of its citizens, yet that’s what “incentives” ultimately do – lay out a trail of cookies hoping they’ll follow them to the desired conclusion. It’s expensive and stupid.

Not all hope is lost, just most. Sen. Mike Lee, R-Utah, one of the few principled conservatives in Washington, said he could support the Senate bill on the condition one fairly basic amendment be added.

Lee wrote, “I would still be willing to vote for it if it allowed states and/or individuals to opt-out of the Obamacare system free-and-clear to experiment with different forms of insurance, benefits packages and care provision options. Liberal states might try single-payer systems, while conservatives might emphasize health savings accounts. Some people embrace association health plans or so-called “medishare” ministry models.”

Seems pretty basic and, therefore, unlikely to happen. Lee continued, “My guess is different approaches will work for different people in different places?—?like everything else in life.”

You’d think, especially in this time of newfound left-wing reverence for federalism when it comes to immigration policy, that empowering states to act however they like on health insurance would find bipartisan support. But that never, ever will happen.

After decades of trying, Democrat dogs finally sunk their teeth firmly into the health care slice of the economic pie. Now, there’s absolutely no way they’re going to loosen their bite. If the suffering of Americans under diminishing choices and soaring premiums and deductibles wasn’t enough to shake that dog, and a succession of electoral losses didn’t have an impact, the constitutional concept of state liberty ain’t gonna do it.

Many people want the basic idea of being left the hell alone to be at least a part of the conversation on health care. That day, just like personal responsibility, appears to be done. That is something I care about.