Derek Hunter
|
Posted: Jun 01, 2017 12:01 AM
Share   Tweet
The opinions expressed by columnists are their own and do not necessarily represent the views of Townhall.com. 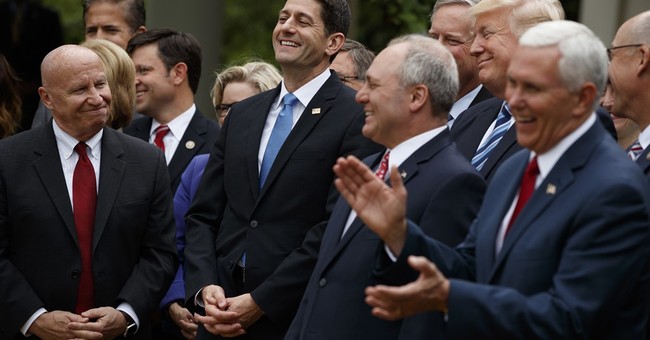 Public service is a calling, or so those in it will tell you. What they don’t tell you is it’s also a nice way to make a pretty good living.

It’s well known that politics serves as the siren call for a lot of wealthy people, both those who earned a fortune and those who inherited one. But for every self-made millionaire or Kennedy looking to pass time their circumstances afford them to play at power, there are others who see politics as a way to make their lives better.

Everyone knows former Sen. Harry Reid, D- Nev., was elected to the Senate a man of modest means but, , curiously, retired a multi-millionaire through shady deals. But Reid is hardly alone.

Most politicians don’t get a rich as Reid, but they aren’t missing any meals.

Members of the House of Representatives and Senate are paid $174,000 per year – nothing to sniff at. Still, many will tell you it’s difficult to maintain two households on that salary – one in their home district or state and another in Washington, D.C. And no doubt D.C. is an expensive place to live.

But it’s not as though this requirement comes as a surprise to them. They knew what they were running for, and most make do with what they have.

Others have found creative ways to pad their pockets and make life in “public service” a little easier.

It’s important to remember, members of Congress set the rules by which their campaign funds can be used. That means they can decide what is legal and illegal to do with hundreds of thousands or millions of dollars every two years in the House and six years in the Senate. With so little turnover by voters and gerrymandering so prevalent in the House, most races are mere formalities. That means huge amounts of campaign cash are, quite honestly, unnecessary.

That unnecessary money is still money, and although it may not have to be spent, it can be. That’s where this racket comes into play.

The latest, but hardly the only, example of what I’m talking about was exposed this week by the Washington Free Beacon. U.S. Rep. Luis Gutierrez, D-Ill., runs zero risk of losing any re-election bid. In 2016, Republicans didn’t even bother putting a name on the ballot against him, so safe is his liberal district. In his previous elections, when there was a GOP “opponent,” it wasn’t even close.

In spite of running unopposed in the general and defeating a primary challenger with 75 percent of the vote, Gutierrez raised more than a half-million dollars for his 2016 campaign. Why?

More curiously, he managed to spend all of it and then some, according to OpenSecrets.

He did so because that money can be spent.

Of course, candidates, no matter how safe they are, run ads to raise their profiles and remind people to vote. That’s normal. What’s less than normal is employing family as campaign staff and paying them well for their “service.”

It is illegal to raise money from lobbyists and people seeking favorable treatment from government, then stuff it in your pockets or buy things for yourself with that cash. Jesse Jackson Jr. served time for basically that.

But “hire” your wife, kids and other family members with that money, and you’re good to go.

Gutierrez “hired” his wife as his campaign treasurer, after she stopped being a lobbyist, and paid her $385,000 since 2010. According to the Free Beacon last year that’s “roughly 25 percent of all campaign expenditures” for Gutierrez.

Of course, that was last year. This year, the Free Beacon reports nearly half of all Gutierrez campaign expenditures went to his wife’s salary.

Gutierrez will not face any serious challenge next year, nor in the foreseeable future, but he’ll keep raising campaign cash and he’ll keep depositing a chunk of it into his wife’s purse.

I don’t mean to single out Gutierrez and his wife; they are hardly alone in this sort of, um, activity. You can’t call it graft because it’s legal…because the people who would make it illegal are the ones directly benefitting from it.

But it is a scam. Democrats and Republicans routinely put family on the payroll of their campaigns and call it a job. It’s a job all right. If people want to “drain the swamp” of politics, ending this racket is as good of a place to start as any…which probably means it’s safe.