Celebrating Mediocrity At The Expense Of Merit 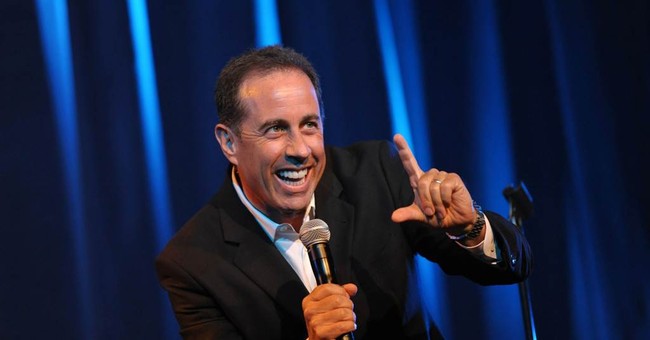 Americans love sports, as evidenced by the fact that the Super Bowl last Sunday was the most watched television event in history. While the game was a blowout and boring because of it, people didn’t tune in to see a tie, they watched to see one team beat the other, unambiguously. But sports, at least on the professional level, are just about the last bastion of meritocracy left in the country, and the damage its loss will bring to the future is immeasurable.

There were controversies this week in Silver Spring, Maryland, and with comedian Jerry Seinfeld that will have most Americans shaking their heads, but has progressives ringing their hands.

Some people are better at certain things than others. Some are good at school, others are good at sports (and some are good at both), and so on. This simple fact was once undeniable because, well, it’s a fact. But now there is a movement afoot not to deny that fact, but to obscure it, to insulate children from it so as to create the impression that everyone is special.

Lake Wobegon, the fictional boyhood home of Garrison Keillor, was noted because “all the children are above average.” While Lake Wobegon is an obvious fiction, some in the city of Silver Spring, Maryland, are seeking to create a virtual one, not by raising low-performing students to heights they’ve yet to achieve, but by refusing to acknowledge high-performing students because recognizing them might hurt the feelings of those not in that group.

The Washington Post ran a story this week about Eastern Middle School in Silver Spring and their plans to have a special pizza party, game room and dance for students who’ve gotten straight A’s. The story wasn’t celebrating students for an achievement most of us never reached, instead it was about how this singling out of students who achieved academic perfection would impact those students who didn’t.

“The students that don’t get to go end up feeling bad,” the mother of a child with an undescribed learning disability told the Post. Maybe, but so what? Have we really reached the point where we can’t celebrate success because not everyone achieves it in every situation?

Barbara Marinak, an associate professor of education at St. Mary’s University in Emmitsburg, Maryland, told the Post, “You’re creating a caste system that could easily result in bullying and victimization, which is what we’re trying to prevent, especially in middle school.”

First of all, think back to when you were in school. How many straight A students at your school were noted bullies? Was the hallway outside the computer lab considered a dangerous place for students with fragile self-esteem to walk without a chaperone? Of course not. If anything, it was the high achieving students who were the victims of bullying. Why not celebrate them?

A normal person might look at the reward of a pizza party as an incentive to inspire students who want to be invited to the party to work harder to try to achieve that standard. Even if they fail, they will have learned that to achieve requires hard work.

This common sense lesson we all learned by living is not the case, at least according to Marinak. She said, “We’ve got 30 years of research that says extrinsic rewards do little to nothing to nurture any kind of intrinsic motivation.”

In other words, there is no way to motivate people to achieve something that isn’t in them already. It seems Marinak believes rewarding those who achieve only serves to de-motivate those who don’t. This is garbage, but so what?

Even if Marinak is right, which she isn’t, can we not celebrate success anymore?

What progressives don’t want people to realize is that just because Facebook founder Mark Zuckerberg became a multi-billionaire last year with his company’s IPO, that doesn’t mean anyone, or everyone, lost billions of dollars. Wealth was created, it wasn’t shifted, it wasn’t transferred. Only government transfers wealth, the private sector creates it.

The private sector is the only way to create wealth, and success in whatever someone chooses is how it is created. Enter Jerry Seinfeld.

Seinfeld has become incredibly wealthy not by taking money from others, but by making people laugh. His eponymous 90s sitcom has created billions in wealth for those involved. He doesn’t have to work anymore, but he continues to work because he loves what he does.

Seinfeld’s latest project is “Comedians In Cars Getting Coffee,” an Internet show that is just that – him driving comedians to get coffee (or eat) and talk about comedy. Pretty basic, and an important resource for anyone thinking about getting into comedy since they talk about their process.

This week Jerry found himself on the business end of a manufactured controversy about race and sexism. No, he didn’t say anything racist or sexist, he said something worse in the minds of progressives – that he doesn’t give a damn about race or gender, he cares about merit. If you’re funny, he wants to have you on his show, if you’re not…he’s not interested.

When asked about why he’d had so many white men as coffee-mates, Seinfeld told Buzzfeed/CBS News that he doesn’t waste time on the “P.C. nonsense” of quotas for his guests, saying “Oh, this really pisses me off.”

When the interviewer persisted, Seinfeld responded, “People think it’s the census or something. This has gotta represent the actual pie chart of America? Who cares? Funny is the world that I live in. You’re funny, I’m interested. You’re not funny, I’m not interested. I have no interest in gender or race or anything like that.”

Unsurprisingly, the progressive bouncers at the door of “decent society” sprang into action. At Gawker, an unfunny white guy named Kyle Chayka opined, “He seems to suggest that any comedian who is not a white male is also not funny.” You would have had to have suffered a recent closed-head injury to glean that from what Seinfeld said, or be a progressive hack looking to have someone buy him a drink in what I can only assume is a hipster-doofus (guessing Brooklyn) neighborhood bar.

Hilariously, as Gavin McInnes pointed out on Twitter, the only thing whiter than the wind-driven snow or the cocaine at Keith Richards’ house is the party Gawker staff threw in 2011 for the staff and the staff of the UK paper The Guardian. The occupants of Seinfeld’s passenger seat has nothing on them when it comes to uniformity.

When stupid is afoot you can count on many other progressives to hop on board. Enter the once relevant Time.

Writer Lily Rothman constructed a no-win situation of Jerry because, well, meritocracy can’t be allowed to stand. She writes, “It’s possible that Comedians in Cars Getting Coffee won’t drive conversation for long enough to have an impact, but if the issue stays in the spotlight, Seinfeld’s perspective will lose. A continued lack of diversity on his show would prove his detractors’ point — and make him look racist and sexist, even if he’s merely failing to actively think about matters of race and sex — while increased diversity would seem to acknowledge that the “nonsense” isn’t so nonsensical at all.”

Seinfeld, and anyone sane, probably wasn’t aware that he was trying to “win” anything, so what his “perspective will lose” remains a mystery. But she not-so-skillfully constructed a scenario to make it appear as though Seinfeld either starts caring about the race and gender of his guests, and books accordingly, at which point progressives will claim a perverse victory of some sort, or he’s a racist/sexist.

But she wasn’t done. “There’s no longer a way for a prominent comedian with Seinfeld’s level of influence to be so glib about the issue — especially given that of his 26 guests, only 2 have been women and another 2 have been non-white. (There have been no minority women guests so far.)” Jerry Seinfeld will be made to care, or the head-counters will attack. Don’t go for the funniest people you can find, Jerry, go for the grocery list of progressive’s diversity trading card sets.

(As a curious aside, I couldn’t help but notice a lack of outrage over Asian comedians not being listed by either Gawker or Time. As a fan of Jo Koy, I’d find this to be racist on their part, if I were a race-baiting, head-counter. But I’m not, so whatever.)

The people who’ve ridden shotgun with Jerry Seinfeld so far are just about the funniest people you could think of, minus a few. Considering it’s an ongoing show, scheduling the filming probably plays a larger role in any omissions you can think of more so than Seinfeld’s secret membership in the Klan.

Whether it’s a pizza party of high-achieving students or a ride in Jerry Seinfeld’s car, meritocracy is under attack. If people don’t like it, if they want to celebrate mediocrity, they’re free to buy pizza for anyone they want, or rent a car and pick up anyone they so please. Just don’t be surprised if no one gives a damn when that car gets to wherever it’s going. If it ever does.