Derek Hosford
|
Posted: Mar 23, 2021 9:16 AM
Share   Tweet
The opinions expressed by columnists are their own and do not necessarily represent the views of Townhall.com. 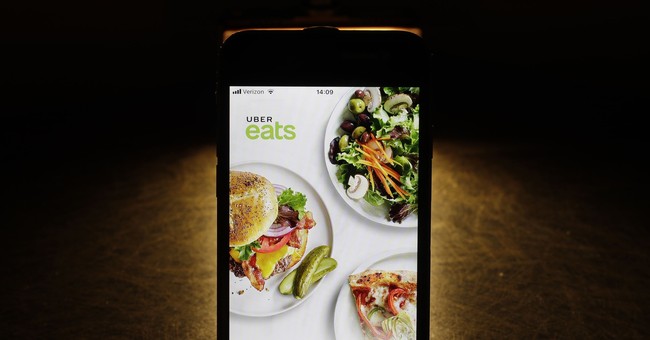 Florida and Rhode Island have become the most recent states to propose placing a cap on the amount of commission food delivery apps like Uber Eats and Door Dash can charge on orders.

If passed, Florida and Rhode Island would join Oregon and Washington, as well as some cities in the U.S. like San Francisco and New York, in limiting the amount of commission food delivery companies can charge restaurants for delivering their food to consumers. Since commissions are a main source of revenue for these apps, ceilings on commissions could have an enormously negative impact on the restaurant market during COVID.

Despite caps on commissions becoming a target by lawmakers nationwide, they hurt small restaurants and consumers. Enforcing caps, which act as a price control, will restrict the ability of these delivery apps to make a profit forcing them to charge consumers more or cut delivery services. Higher consumer prices and fewer customers create less business for these restaurants who depend on access to these apps for a large number of consumers, which affects already slim profit margins in the market.

Delivery services are a vital part of the modern restaurant industry and became essential during the pandemic. The four top U.S. delivery apps saw revenue rise a total of $3 billion collectively due to a doubling in the demand for delivery when the Covid-19 pandemic led governors to issue stay at home orders across the country. By their proposed actions, governments would be jeopardizing the sales of restaurants and harming the supply chain that supports consumer services.

Proponents of commission caps argue that without them, small restaurants would be forced to pay high fees to large tech companies that can afford to shoulder the weight of the regulation. What they are missing, however, is that these caps will ultimately harm consumers and the small businesses that depend on delivery apps.

The fees that delivery apps charge consumers are necessary to make up lost revenue from restaurants due to the caps, according to a statement from DoorDash. While seemingly small, these fees add another cost onto an already expensive price for delivery. Consumers, who analysts say will be hesitant to accept any additional fees and costs, are less likely to use these delivery apps, resulting in the potential for lost sales for these restaurants. In San Francisco, after caps were applied last year, Grubhub saw a 10% decrease in orders from local restaurants on their platform. The enforcement of caps in other cities and states could see more restaurants impacted in this way.

Commission caps have also caused delivery apps like Grubhub to reduce the delivery range of areas they serve. This negatively impacts those in rural areas who already have limited access to other healthy food options in their area like grocery stores.

Commission caps on delivery apps do not just result in higher prices, they also have a rebound effect on the small restaurants they are meant to protect. Larger restaurant chains like McDonald’s are able to negotiate down commission rates to 15% or lower with delivery platforms because they can guarantee a high, steady volume of demand from consumers. Smaller restaurants, on the other hand, are riskier partners for delivery platforms and therefore pay higher commission rates. Setting commission caps at artificial levels forces food delivery apps to prioritize large restaurants over smaller ones, resulting in fewer partnerships with small restaurants.

Not being able to utilize food delivery platforms would mean much lower sales for smaller restaurants at a time when COVID has limited their access to the public. Larger restaurant chains and fast-food companies can afford to take a loss on the number of customers they attract, and some larger restaurant chains also have added flexibility of their own in-house delivery services. This gives them the ability to reach consumers without having to rely on digital apps or paying commissions.

On the other hand, a reduction in business for smaller restaurants with much tighter budgets and no delivery service is crushing. A typical small restaurant has a profit margin that falls between the low 3-5% range. Without a steady flow of orders, these small restaurants can find themselves in financial trouble quickly.

Despite a desire to protect smaller restaurants from food delivery apps charging excessive commissions, commission caps would clearly harm consumers and small businesses by raising prices and reducing demand. Governments should seek to remove regulations that states like Florida and Rhode Island have proposed to help out small restaurants that have been hurt badly by the pandemic.

Derek Hosford is a policy analyst at the American Consumer Institute, a nonprofit educational and research organization. For more information about the institute visit www.TheAmericanConsumer.org or follow us on Twitter @ConsumerPal.