Dennis Prager
|
Posted: Sep 04, 2018 12:01 AM
Share   Tweet
The opinions expressed by columnists are their own and do not necessarily represent the views of Townhall.com. 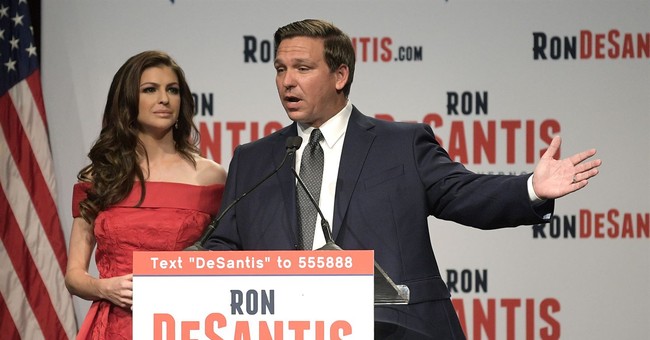 To appreciate the level of dishonesty and societal harm the media, the Democratic Party and others on the left engaged in last week regarding Congressman Ron DeSantis, one has to know exactly what DeSantis said.

The day after he won the Republican primary for governor of Florida and Tallahassee Mayor Andrew Gillum won the Democratic gubernatorial primary, DeSantis said: "The last thing we need to do is to monkey this up by trying to embrace a socialist agenda with huge tax increases bankrupting the state. That is not going to work."

He was clearly referring to Gillum's left-wing positions, which were described in the Sun-Sentinel, the main -- and not conservative -- newspaper of Broward County in South Florida: "Gillum is an unabashed champion of his party's most progressive ideas -- including things like Medicare-for-all single payer health system, abolishing the federal Immigration and Customs Enforcement agency and impeaching President Donald Trump."

So, we can at least all agree that Gillum is on the left end of a left-wing party and, therefore, that anyone from the center to the right in American politics will regard his policies as, at the very least, injurious to Florida's -- and America's -- economy.

What, then, did DeSantis say that was morally objectionable? He said the socialist ideas of his opponent would monkey up Florida's economy -- which would be a nonissue were it not for Gillum being black. Therefore, according to the Democratic Party and the left-wing media, DeSantis used that term to send a "racist dog whistle" to fellow Republican racists.

As Washington Post columnist Jonathan Capehart headlined his column, "Ron DeSantis's 'Monkey' Comment Was Just the Start of His Racist Dog-Whistling." He wrote, "The obvious slur here is 'monkey this up.' Likening African Americans to monkeys, apes and chimps is a racist pastime."

The chairwoman of the Florida Democratic Party, Terrie Rizzo, tweeted, "It's disgusting that Ron DeSantis is launching his general election campaign with racist dog whistles."

Florida Congresswoman Frederica Wilson, a Democrat who represents a district in South Florida, said: "They always find a way to add some sort of insult to African-Americans and make it racist. 'Monkeying this up' is clearly communicating that."

The NAACP Florida State conference said that "apes" and "monkey" are "by far the best-known racist references to African-Americans in our national folklore. It's only equal in racial semantics to the 'N-word.'"

Gillum himself said: "It's very clear that Mr. DeSantis is taking a page directly from the campaign manual of Donald Trump."

On CNN, Gillum told Chris Cuomo, "Well, I'll try to be articulate" -- sarcastically referencing DeSantis' description of him as an "articulate" advocate of the leftist policies he espouses. This is normally a compliment, but it is now deemed racist when used to describe any black. "(H)e's apparently given up the whistle," Gillum continued. "They've gone to the bullhorn with these kinds of tactics."

On the CNN website, LZ Granderson wrote: "White people linking black people to monkeys has been a racist trope for centuries. That's why when Florida Rep. Ron DeSantis, the Republican nominee for governor, used the phrase 'monkey this up' when talking about the handling of the economy by his black Democratic opponent, it was hard to believe that the word choice was an accident."

The New York Times reported, "Sharon Austin, a professor of political science at the University of Florida, said she saw Mr. DeSantis's language as a not-so-subtle racist dog whistle."

Princeton University African-American Studies professor Eddie Glaude Jr. said on MSNBC: "That's obviously a racial dog whistle. ... here we are once again. We are right back where we've always been."

Why does the left do this? Why does it incessantly libel Republicans and conservatives as racists?

The answers are as vile as they are obvious.

Second, though most intellectuals are on the left, the intellectual foundation of left-wing beliefs is unbelievably weak. Leftism is almost entirely emotion-based. That's another reason the left smears conservatives and tries wherever possible to prevent conservatives from speaking in the university, on the internet and by the many big businesses in the hands of people on the left: Since leftists cannot debate conservatives, they have to smear them.

America is the least-racist multiracial, multiethnic nation in world history. The left's constant need to locate racism where it doesn't exist is proof of this.