Winooski, Vermont and the Dismantling of America's Values 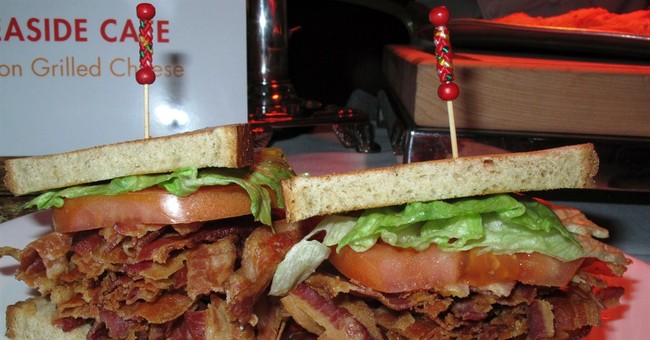 As a talk show host, I have no choice but to keep up with what's happening in America and the world. I am therefore submerged in depressing and often angering fare.

It is hard to read about and discuss the progressives who dominate American media and academia who morally equate Israel and Hamas; who describe America -- the most tolerant multi-ethnic country in the world -- as racist; and who characterize American universities as a "rape culture."

But there was a barely reported story that came out of a small city in Vermont last week that, for reasons to be explained, really got to me. The story isn't comparable to the beheading of innocent people or as dramatic as the rioting in Ferguson, Missouri. But if it typifies what is happening in America, it is difficult not to be pessimistic about America's future.

The facts of the story are not in dispute.

As reported in the Burlington Free Press, a restaurant in the town of Winooski, Vermont, population 7,000, "removed a sign reading 'Yield for Sneakers Bacon' from a garden at the Winooski Rotary."

Why did the Sneakers Bistro and Cafe remove the sign?

Because "a woman who described herself as 'a vegan and a member of a Muslim household' called the sign offensive in a post" on a local Internet forum.

"Given the large number of Muslim families in Winooski, as well as many others who do not eat pork for a variety of reasons," the woman wrote, "it seems unnecessary for this insensitive business sign to be at the city's main crosswalk."

The Free Press reported that "Sneakers owner Marc Dysinger replied that the sign was meant to be fun and to show that the restaurant cares about Winooski. ... He apologized for the controversy."

After "a swarm of Internet comments followed the decision," Dysinger wrote on Facebook:

"We are here to serve people BREAKFAST, not politics. We removed the sign that was located on public property as a gesture of respect for our diverse community. ... Removing it was not a difficult decision. We still love bacon. We still love eggs. Please have the political conversation elsewhere."

Everything about this story is depressing.

The woman who wrote this totalitarian drivel is the worst combination of fake victimhood, political correctness (which itself is a PC euphemism for "that which offends the left"), and Muslims who seek to impose sharia law on non-Muslims. It is also highly likely this woman graduated college, probably with a major in the liberal arts. Our universities teach non-white, non-Christian, and female students to find offense everywhere. American students get degrees in Finding Offense.

As a Jew who refrains from eating bacon or any pork product, it would never occur to me or to Jews far more observant than I to tell a non-Jewish restaurant to take down a sign advertising bacon. Nor would it occur to any Jew to find such an ad "offensive."

The woman possesses yet another vile trait -- one of the ugliest in the human pantheon: ingratitude. There is a Somali refugee community in Winooski. These people were saved from the murderous horrors of Somalia; yet this woman, whether or not she is a member of that specific community, has the gall to tell the city that saved this Muslim community's life that it dare not advertise a food she doesn't eat. Such ingratitude doesn't come naturally. It has to be learned.

This woman should have been ignored or told in the same social media in which her complaint appeared to seek psychotherapy and/or be reminded that she's free to move to a society that bans bacon, and that this society is free and wishes to remain so.

Instead the restaurant owner immediately gave in to this woman.

This man typifies the moral weakening of America taking place over the last generation. Throughout our history we prided ourselves in being the "Home of the Brave." The restaurant owner's reaction exemplifies the opposite of bravery. He actually "apologized for the controversy." In a morally ordered universe, one apologizes for a wrong done. Yet he did nothing wrong. She did.

Why did he apologize even though he was the wronged party? Because he has imbibed the left's poisonous doctrine of "diversity," one of the left's fig leaves behind which it dismantles American values and unifying identity.

A feature of Political Correctness is lying on its behalf. This was exemplified by Winooski's city manager, Katherine Decarreau, who wrote, 'As I read her post, her request came as a vegan, not as a Muslim.'"

This comment is breathtaking in its mendacity. The complaining woman described herself as "a member of a Muslim household" and wrote that the sign is offensive to Muslims. Yet the city manager publicly denies that the complaint emanated from the woman's being a Muslim.

No one has called her out on this lie, let alone called for her resignation. Because in the Brave New World in which we live, truth doesn't have an objective existence. Everything, even truth, is relative.

When leftism (aka political correctness) corrupts as small and Middle American a town as Winooski, Vermont, it is time to be very concerned.

And to fight back.

This means, among other things, getting Muslim organizations to disassociate themselves from the original message. I could not find one that has, including the Winooski Islamic Community Center.

Dennis Prager's latest book, "Still the Best Hope: Why the World Needs American Values to Triumph," was published April 24, 2013 by HarperCollins. He is a nationally syndicated radio show host and creator of PragerUniversity.com.