Debra J. Saunders
|
Posted: Apr 01, 2018 12:01 AM
Share   Tweet
The opinions expressed by columnists are their own and do not necessarily represent the views of Townhall.com. 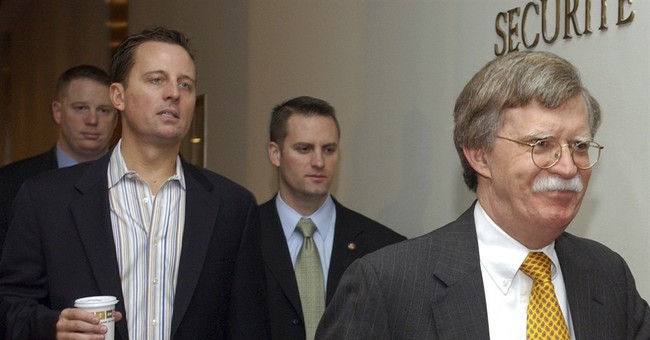 WASHINGTON -- What if they had negotiations to prevent a war and nobody came?

That's the prospect staring down at President Donald Trump who says he wants to remake U.S. foreign policy, but doesn't have a fully staffed army of diplomats and national security figures to lead the charge.

Trump fired Secretary of State Rex Tillerson two weeks ago and nominated CIA Director Mike Pompeo to replace him. Even if a speedy confirmation puts Pompeo in charge at Foggy Bottom in short order, he'll end up as the boss of a lot of empty seats.

The American Foreign Service Association lists 188 ambassadorial positions, but fewer than 75 have been filled. The administration has failed to name individuals to fill the usual ambassador positions except for a number in the high 30s, according to the administration.

The White House points the finger at the antics of Senate Democrats for slow-walking the confirmation of able administration picks.

"A stunning 43 percent of the president's highly qualified nominees are still waiting for confirmation in the Senate," Press Secretary Sarah Sanders said of the overall pool of unconfirmed nominees during a recent briefing. Senate Minority Leader Chuck Schumer's "tactics have led to 102 fewer confirmations than the next closest administration."

Observe the Democrats' treatment of Richard Grenell, whom Trump's nominated to be ambassador to Germany in September. Grenell is clearly qualified. A frequent Fox News contributor, he ably served as spokesman to four U.S. ambassadors to the United Nations from 2001 to 2008.

In 2012, Grenell served as national security spokesman for Republican presidential candidate Mitt Romney -- which made him the first openly gay spokesman for a GOP presidential hopeful -- before he resigned amid objections from social conservatives. His confirmation would be a win for gay Republicans, which one would expect to be embraced by Democrats who support gay rights.

The Senate Foreign Relations Committee advanced Grenell in October. Then nothing happened.

Republicans complained that the Democrats' use of secret "holds" prevented them from knowing which Senate Democrat stood in Grenell's way.

It wasn't until March 22, when Senate Majority Leader Mitch McConnell, R-Ky., asked the Senate to approve a floor vote on Grenell, that a name presented itself. Sen. Jeff Merkley, D-Ore., effectively blocked the vote. Under Senate "cloture" rules, one objection can delay a confirmation vote until after 30 hours of debate. Those 30 hours of debate mean real work doesn't get done.

Merkley explained he objected to Grenell's "lengthy track record of tweets attacking both prominent Democratic and prominent Republican women," as well as his tweets that were "dismissive of the Russian threat."

Merkley also has criticized Trump for taking so long to nominate diplomats in troubled regions.

Sen. Bob Menendez, D-N.J., also has faulted the Trump administration for slamming Democrats' delay tactics while the president neglected to nominate individuals for a large tranche of posts.

To be sure, the Trump White House has been slower than other recent administrations to name individuals to key posts. Trump has yet to nominate an ambassador to South Korea, even as he prepares for negotiations with North Korean strongman Kim Jong Un, thanks to an invitation transmitted by Seoul diplomats.

The process of vetting potential appointees and clearing would-be ambassadors with host nations has become so time-consuming that this administration cannot move as swiftly as past White Houses moved, an administration official maintained. Also, when senior level aides are frozen, the positions below them are held up as well.

The bottom line, noted McConnell spokesman Don Stewart, is, "The Democrats have gone out of their way to block even the most highly qualified nominees that the president has put forward and it has caused necessary delay for our foreign service and national security around the world."

Put another way: Trump is taking the slow route because he's a non-politician trying to put other novices in the government. Senate Democrats are dragging confirmations precisely because they are political animals.

"We all know the direction of this body," Lankford told the Senate last year. When the Democrats next win the White House, "Republicans will say they did 63 to us, we'll do 120 to them."

There is a way to put an end to Senate rule antics. In 2013, when Obama controlled the White House, Senate Republicans helped pass a resolution to reduce post-cloture debate time from 30 hours to eight hours for most executive branch nominees. Lankford wants the Senate to pass another such measure to stop the monkey wrenches through 2018, and let nominees rise with 51 votes or fall without them.

They've made it too easy to get nothing done.