Debra J. Saunders
|
Posted: Jan 31, 2018 12:01 AM
Share   Tweet
The opinions expressed by columnists are their own and do not necessarily represent the views of Townhall.com. 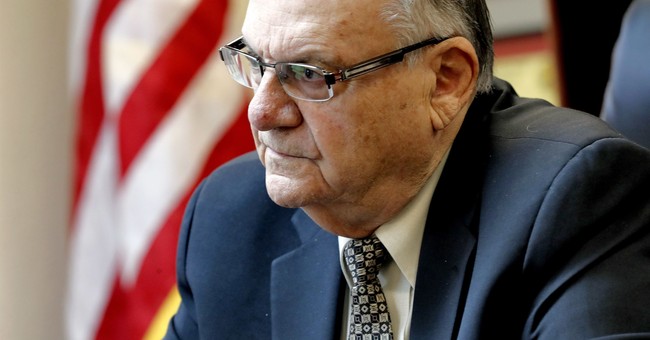 WASHINGTON -- America's most prolific leaker, Chelsea Manning, and the man who proclaimed himself "America's toughest sheriff," Joe Arpaio, have a few things in common. Both are beneficiaries of presidential clemency. Both are running for the U.S. Senate, and both have extreme and risky views.

That's where the similarities end.

Two clemency recipients running for U.S. Senate at the same time, however, is probably one for the record books.

Chelsea Manning, 30, the transgender former U.S. Army Pfc. Bradley Manning, was responsible for the largest leak in history of classified documents to WikiLeaks in 2010. After his conviction in 2013, for which he received a 35-year sentence, Manning came out as a woman.

During Arpaio's 24 years as Maricopa County sheriff, he oversaw a tent city built to house low-level offenders and warn others about the harsh conditions they would face if convicted in his jurisdiction. Arpaio, 85, famously made inmates wear pink underwear.

His conviction for defying a court order to stop apprehending undocumented Latino immigrants and handing them over to federal authorities led President Donald Trump in August to issue his first presidential pardon. The full pardon arrived before Arpaio was sentenced.

Former President Barack Obama commuted Manning's sentence during his final days in office. A commutation leaves Manning's felony conviction on her record, but it did allow her to leave prison after serving seven years, only one-fifth of her time. And as a former felon, Manning is eligible to vote and run for office in Maryland.

Arpaio's entrance in the race for the Senate seat being vacated by Republican Jeff Flake could tilt the race in favor of Rep. Martha McSally, a retired Air Force pilot, in the Aug. 28 GOP primary, according to GOP strategist Matt Mackowiak. That's because Arpaio is likely to draw support away from Kelli Ward, whose candidacy was endorsed by former White House chief strategist Steve Bannon.

Can Arpiao win? No, said Mackowiak, likening the former sheriff to Alabama's Roy Moore, who won last year's special election GOP primary only to be defeated in the general. Both Arpaio and Moore are polarizing figures with high negative poll numbers, he noted.

Democratic strategist and CNN contributor Maria Cardona objects to Arpaio's pardon and candidacy. "He is a criminal. He is a racist and a xenophobe," she said, adding that Arizona Republicans "need to hope and pray he doesn't become their nominee."

Manning announced in a video posted on Twitter that she would attempt to win the seat occupied by Sen. Ben Cardin, D-Md. Manning is registered as a Democrat.

Like Arpaio, Manning is a polarizing figure. National security hawks use the word "traitor" to describe her.

When Harvard's Kennedy School of Government named Manning a visiting fellow last fall, former CIA Deputy Director Mike Morell resigned from the school's Belfer Center because, he wrote, he could not remain at an institution "that honors a convicted felon and a leaker of classified information." The Kennedy School then rescinded its offer to Manning.

Recently Manning has used Twitter to rail against police. On Jan. 9, Police Appreciation Day, she tweeted "f--- the police" and asserted "police kill hundreds of people every year with absolute impunity." She also called the Immigration and Customs Enforcement agency "literally the new Gestapo."

Her massive WikiLeaks dump poses a bigger problem. "I think it's an open question as to whether she can get a security clearance as a senator," said GOP strategist Mackowiak.

The long-shot candidacies beg a bigger question: Should either Senate hopeful have been pardoned and given a chance to become makers of laws they once scorned?

Pardon expert Ruckman believes that clemency recipients should be free to run. Arpaio contends that he was innocent, Ruckman noted, so why shouldn't he be able to seek election?

The White House did not respond when asked the president's view on Arpaio's candidacy. But Trump could have prevented Arpaio from throwing his hat into the ring, Ruckman noted.

"Sometimes you will see on a clemency warrant, it will say that the person is pardoned on the condition that they never run for political office again," he said. "Back in the 1800s, I've seen that plenty of times."

As it is, it will be up to Arizona and Maryland voters to decide.