Which Story Are We Sticking To?

Debra J. Saunders
|
Posted: May 16, 2017 12:01 AM
Share   Tweet
The opinions expressed by columnists are their own and do not necessarily represent the views of Townhall.com. 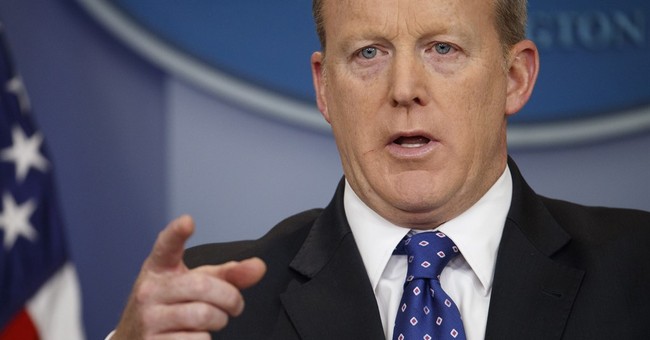 President Donald Trump did himself no favor Thursday when he went on NBC News and essentially refuted the reason his team had given the press for why he fired FBI Director James Comey.

Trump told NBC's Lester Holt, "I was going to fire Comey" regardless of what the Department of Justice recommended, which conflicted with the White House's sketchy version of events.

On Wednesday, Deputy Press Secretary Sarah Huckabee Sanders told reporters Trump asked Rosenstein and Attorney General Jeff Sessions for their recommendation "based on the conversation they had on Monday. He asked them to put that recommendation in writing. But they came to him on his own." Wrong.

That day Vice President Mike Pence also framed Trump's decision to fire Comey as the result of Rosenstein's and Sessions' input. Not true.

The White House does not look good. David Axelrod, former guru to President Barack Obama, summed up the problem when he told The New York Times, "The most hazardous duty in Washington these days is that of a Trump surrogate. ... You wind up looking like a liar or a fool."

Anonymous staffers began leaking stories about how various individuals were blindsided -- which only highlighted the chaos in the West Wing.

Trump tweeted Friday morning, "James Comey better hope that there are no 'tapes' of our conversations before he starts leaking to the press!"

Later Spicer had to go out and face the White House press corps. When a reporter asked if Trump had recorded conversations with Comey, the press secretary replied, "I've talked to the president. The president has nothing further to add on that." In this atmosphere, it's better for spokespersons to signal they are out of the loop.

According to press reports, Pence was aware that Trump wanted to fire Comey the week before it happened. Now, no vice president is going to reveal the content of conversations with the president, not if he wants the commander in chief to confide in him. But in the future, Pence could see reason to backpedal his rhetoric in order to safeguard his reputation as a straight shooter.

Worst of all, Trump's NBC interview made clear that he has so much contempt for his own spin that he freely stepped on it.

The original White House story always lacked credibility. In July, Trump accused Comey of going too easy on Hillary Clinton when the FBI director announced the agency would not file charges against her for using a home-brew server for her classified communications as secretary of state. In October, when Comey temporarily reopened the investigation, Trump praised the FBI chief for doing the right thing.

Rosenstein's memo, on the other hand, hit Comey for being unfair to Clinton by speaking to the press in July and broadcasting the FBI's decision to reopen the investigation in October. Also, his memo did not explicitly recommend that Trump fire the FBI chief. That is, there is no way the Rosenstein memo was the catalyst for Comey's dismissal.

Trump himself could not stick to that fantastic story Thursday.

In a sit-down Friday with Fox News, Trump insinuated that he is thinking of shaking up his communications staff-- even taking over the press briefings himself. If Trump thinks he does a better job defending himself, he might consider that's because he would not make the very bogus arguments that his team was tasked with making.

Over time these antics, if they continue, only can serve to isolate Trump. Who, after all, wants to be the next press secretary or deputy to be left out on the loneliest of limbs? If Donald Trump keeps this up, professionals who value their reputations will find excuses to stay away, and sycophants alone will remain.