Loretta Sanchez Doesn't Back Down

Debra J. Saunders
|
Posted: May 17, 2016 12:01 AM
Share   Tweet
The opinions expressed by columnists are their own and do not necessarily represent the views of Townhall.com. 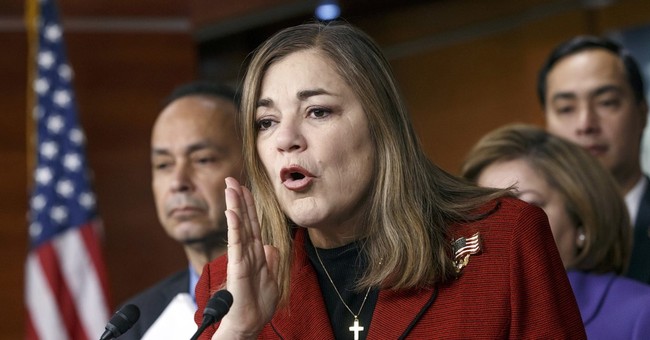 Trending
Running to replace Barbara Boxer in the U.S. Senate, Rep. Loretta Sanchez, D-Calif., is not backing down from comments she made in December about the percentage of Muslims in the world who support a holy war. After the San Bernardino terrorist attack, Sanchez appeared on "Politicking with Larry King." King asked her about President Barack Obama's reluctance to use the term "radical Islamic terrorism." "A small group" of "anywhere between 5 and 20 percent" of Muslims, Sanchez said, supports a caliphate and is "willing to go to extremes" to secure one. Because Donald Trump recently had proposed a ban on Muslims entering the United States, critics went after Sanchez for saying something that arguably could support his proposal. She made clear Monday when she spoke with the San Francisco Chronicle's editorial board that she does not support it. Sanchez has been a vocal supporter for Syrian refugees. Still, the quote has haunted her.

When the issue came up at the San Francisco Chronicle-KCRA debate at the University of the Pacific last month, a Sacramento Bee fact check concluded: "She didn't back away at the debate and, despite ample criticism that they are too high, Sanchez is correct when she says nobody has refuted her numbers with authoritative research. Much of the concern over the comment came from those who believe it is impossible to estimate a worldwide number."

On Monday, Sanchez once again was asked about her source for the guesstimate. She cited a BBC poll that found 27 percent of British Muslims were sympathetic to the motives behind the Charlie Hebdo attack in Paris. (The same poll reported that 93 percent of British Muslims thought they should obey British law and that only 11 percent had sympathy for those who want to fight against Western interests.) A 2006 Pew Research Center poll found that 16 percent of French and Spanish Muslims said terrorism in defense of Islam could be justified.

Sanchez also answered that she has heard experts use such percentages. I can say the same. Over the years, I've heard terrorism experts throw out estimates about the radicalization of Muslims in different countries based on polls like the ones mentioned above.

The executive director of the Council on American-Islamic Relations' Greater Los Angeles chapter, Hussam Ayloush, took issue with what Sanchez said, saying she did not make clear that she was referring to Muslims in other Western countries as she since has contended. He believes that it is "offensive" to attempt to "paint all Muslims with one paintbrush." Muslims in some countries may register high degrees of radicalization, but that's more a function of their marginalization in that country than of Islam itself. In America, Ayloush added, Muslims "are engaged in every walk of life." Yes, he sees "institutionalized racism," but he also sees the tools to address it.

The bottom line: Sanchez told the Chronicle she has good relations with her district's large Muslim and Arab constituency. "No doubt about it. We've had a great relationship with the congresswoman," Ayloush added. That's why CAIR is so disappointed by her remarks.

I am surprised (impressed) Sanchez has not backed down. After all, it would be so easy -- so politically correct -- for her to say that she misspoke. But in 2016, maybe the politically expedient take-back doesn't work.