Debra J. Saunders
|
Posted: May 15, 2016 12:01 AM
Share   Tweet
The opinions expressed by columnists are their own and do not necessarily represent the views of Townhall.com. 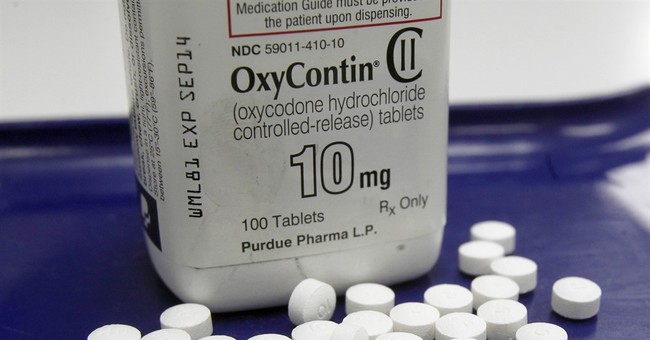 The death of Prince, who apparently had a Percocet problem, and a 2016 presidential primary peppered with New England town halls that delved into increased heroin overdoses and prescription drug abuse have converged to create what CNN's Dr. Sanjay Gupta calls "a public health epidemic." Drug addiction is 2016's big nonpolitical story. CNN aired a special, "Prescription Addiction: Dead in the USA." The Senate passed the Comprehensive Addiction and Recovery Act to provide grants for treatment and improved monitoring. The House also is working on legislation, with funding expected later in the year.

Grant Smith, deputy director of national affairs for the Drug Policy Alliance, sees Washington moving in the right direction by "treating drugs as a health issue" and "addressing head on some of the harms associated with opioid use." Some 78 Americans die from opioid overdoses every day, CNN reports. Its special "Prescription Addiction" related some horror stories -- the football star who was popping 1,400 opioid pills a month; the teen who suffered irreversible brain damage after he started experimenting with friends; the teen who died of an accidental overdose after he got hooked on drugs prescribed to treat a football injury. Gupta cautioned that there is "legitimate pain that warrants" a prescription, but for a short period of time. Given the rise in overdose deaths, the media should warn the public about the risk that comes with painkillers.

I see a downside to coverage that has turned painkiller addiction into a media chew toy. This narrative focuses on doctors who for a variety of reasons seem to have overprescribed medication, and on patients who at their own peril try to game the system to get drugs to feed their addiction. There is little room in this narrative for the many individuals who do not get the pain control they need. I am talking about older people who need better end-of-life care. Many start phobic about painkillers, as they fear being drugged and listless. They may not realize that good palliative care can make them more able to cope in their remaining time. (As for those few who might overuse medication, who cares? They're not going to take up robbing banks.)

I called Eric Chevlen -- a friend, Ohio pain medicine specialist and medical oncologist -- to get his take on the new big story. Chevlen sees another problem in America -- untreated pain. Poor people and uninsured individuals are less likely to get the relief they need. Also, people who have hard-to-diagnose ailments (like fibromyalgia, which mostly afflicts women) may go years before receiving available treatment.

Because they're debilitated, people who don't get the pain control they need may not feel like speaking up, so you don't hear their stories. You hear of addicts who go to the emergency room in search of a fix, but not about those who suffer in silence.

When it comes to pain control, Chevlen told me, "hardly anybody gets the right amount."

Chevlen has two concerns about the new approach in Washington. First, new Centers for Disease Control and Prevention guidelines are labeled guidelines, "but they're going to be interpreted as mandates." Second, Chevlen also believes that pushing patients away from opioids and toward anti-inflammatory meds carries a different risk -- toxicity. Some patients will die from long-term organ damage, a side effect of pharmaceuticals, but their deaths won't be counted as overdoses.

I know that this column will spur readers to write about the horrible tragedy of a child, or other loved one, who got sucked into opioid addiction and into a downward spiral that ended in death. Too many families can point to a doctor who didn't keep a careful eye on what he prescribed. Or maybe the doctor was careful, but opioids had taken an ineffable hold and street trade made other drugs too available. Their stories are powerful, and serve as a warning. But there are other stories too -- tales of people racked with pain that robs them of the joy of living. As Chevlen warned, "When we're treating pain inadequately, fewer people die of opioid deaths."