Debra J. Saunders
|
Posted: May 03, 2016 12:01 AM
Share   Tweet
The opinions expressed by columnists are their own and do not necessarily represent the views of Townhall.com. 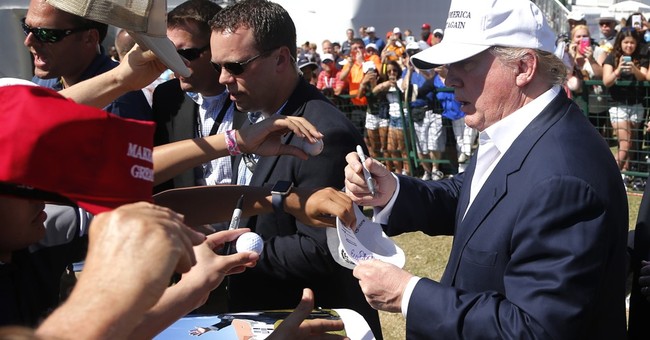 Cable news pundits often warn that Republicans have to respect the righteous anger of Donald Trump supporters. They forget the other angry Republican voters -- the many folks I saw at California's Republican convention in Burlingame over the weekend who have been loyal GOP votes. They've gone to the lunches and supported candidates for down-ticket races. They care about conservative values; they know how it is important to win general elections. And they're furious that their party is being hijacked by a rump of unreliable voters who think that just because they showed up at a rally, they are entitled to special treatment.

It kills me. This could have been the year when Republicans took back the White House. Instead, it may be the year GOP primary voters handed the election to Hillary Clinton, a dishonest, self-serving political animal and the second-least liked person in the race.

Trump fans think that because Trump trounced the competition in most GOP primaries, he can win in November. They don't care if Gallup reports that 70 percent of women don't like Trump. His net favorable/unfavorable rating among women is minus 47 percent. They know women who like Trump. They point to Clinton's minus 3 percent net negative rating among women. That's the statistic they trust.

On June 7, California will offer the last stand to stop Trump from winning the 1,237 delegates needed to clinch the nod. Because California's system awards all but 13 of its 172 delegates to each winner in the state's 53 congressional districts, the stop-Trump movement is telling state Republicans to vote for Sen. Ted Cruz of Texas or Ohio Gov. John Kasich -- whichever candidate looks likelier to win one's particular district. (How can you tell? Watch for which GOP rival generates the most campaign mail.)

On Friday night, Kasich gave the standout speech at the convention. It's too bad he wasn't addressing a full house, as I saw a candidate who understands economic insecurity and the fear that haunts working-class families with no political connections or clout. I saw the Republican who fares best against the presumptive Democratic nominee.

Former California Gov. Pete Wilson endorsed Cruz on Saturday. Wilson doesn't trust Trump with Supreme Court nominations, but he believes that Cruz would pick solid conservative justices and be a strong commander in chief. Wilson told me, "If he can actually win the nomination, I think Cruz can win it."

GOP pros have been watching Trump stomping all over the slim chances of a party on life support. In the first three months of 2016, California registered 850,000 new voters -- twice as many voters as it registered in the same period in 2012. Yes, GOP registration is up. But political data guru Paul Mitchell wrote in Capitol Weekly that the state has seen a "doubling of registration growth among Latinos, and a more than 150 percent increase for some young voters, and a near-tripling for Democrats." That's why many GOP political pros will not vote for Trump in June -- or November.

Others argue that Trump is inevitable. And if he could confound naysayers by garnering the most GOP votes, perhaps he also could beat the odds in November. OK, there is a possibility that Trump could win and perhaps even could be a good president. But is it likely?