Debra J. Saunders
|
Posted: Jan 03, 2016 12:01 AM
Share   Tweet
The opinions expressed by columnists are their own and do not necessarily represent the views of Townhall.com. 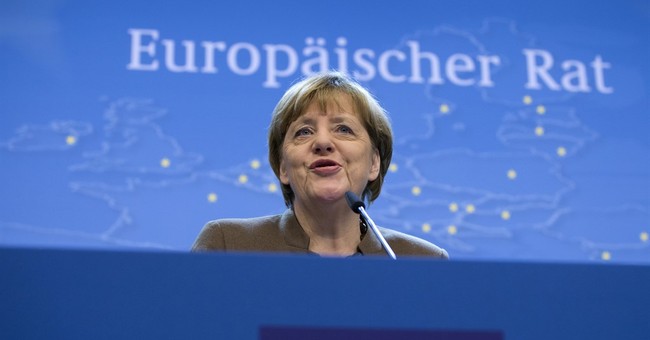 Time magazine made a solid news judgment in naming German Chancellor Angela Merkel its 2015 "Person of the Year." The flood of refugees and immigrants from the Middle East and Africa into Europe, the greatest wave of migrants since World War II, is the world-changing event of the decade, and Merkel is the individual most responsible for rolling out Germany's welcome mat to more than a million asylum seekers. "It was an audacious act that, in a single motion, threatened both to redeem Europe and endanger it," Time wrote.

It was an audacious act -- and no one knows better than Merkel how unmanageable it is. In July, the chancellor endured a painful televised confrontation with a Palestinian teen, who, in fluent German, told Merkel that the threat of deportation kept her from enjoying the life she sees others living. "As long as I don't know that I can stay here, I don't know what my future will be," the girl said. Visibly upset, Merkel told the 14-year-old that Germany "just can't manage" to help every refugee and asylum seeker.

In September, Merkel threw caution to the wind and dispensed with standard European Union asylum procedures. The gesture was seen as a green light not only by desperate Syrians fleeing violence but also by economic refugees from Africa and Afghanistan who saw the moment as perhaps a final opportunity to squeeze into Europe before the door slams shut. A disapproving Hungarian official told The Wall Street Journal, "The Germans think they're the Americans of Europe."

Here's another parallel between Germany and the United States: The day comes when governments have to enforce immigration laws, even if they don't want to. In the coming weeks, The Washington Post reported, the Obama administration is expected to deport Central Americans who surged across the border in 2014 but did not qualify for asylum. In December, Germany stepped up deportations of refugees not qualified for asylum status. At a news conference, Merkel made clear that many Afghans seeking asylum will be sent home.

"Germany is saying, 'We're going to deport everyone (who doesn't qualify),'" observed Jessica Vaughan of the pro-enforcement Center for Immigration Studies. "They're actually starting to remove people, and it's going relatively smoothly. That should be a lesson to the U.S."

Germany's articulation should be a lesson to Washington. German Parliament member Mark Hauptmann gave two reasons Afghans are unlikely to qualify for asylum. First, he told NPR, "if we look at the people who are leaving the country, they are the young ones, the better-educated ones, and those ones are needed to build up Afghanistan." Also: "We send our troops; we send our citizens there to protect Afghans and to basically create safe environments in Afghanistan. And then people from Afghanistan are coming as so-called war refugees here to Europe."

Vaughan told me that she admires Merkel for wanting to help Syrian refugees, but unfortunately, the chancellor's rhetoric "came across as an open invitation to anyone who can get there." To set things right, Merkel had to set clear boundaries and enforce the rules. "I think the big difference is that Merkel seems to mean what she says," Vaughan added, unlike the Obama administration, which enforces immigration law spottily, and then reluctantly.

Now Merkel finds herself back where she was in July. She knows that there are good people who want nothing more than to be good Germans -- but she also knows that Germany cannot be the country that it is if it accommodates everyone who wants in. With too much traffic, any welcome mat wears thin. Thus, Merkel must "manage" who gets to stay in Germany -- if she wants to maintain the support of German voters who, with reason, fear that their safety net cannot handle the strain of a million-plus refugees.

Credit Merkel with articulating a policy and then refining it when she had to confront its unintended consequences. She knew the political cost and is likely to pay it someday.

For his part, President Obama throws out bromides -- for example, "That's not who we are." Everyone can agree with that statement because no one is sure exactly what it means. Meanwhile, the administration signs executive orders rewarding undocumented immigrants for flouting the law and then, the next day, threatens to actually enforce the law. And always about politics.