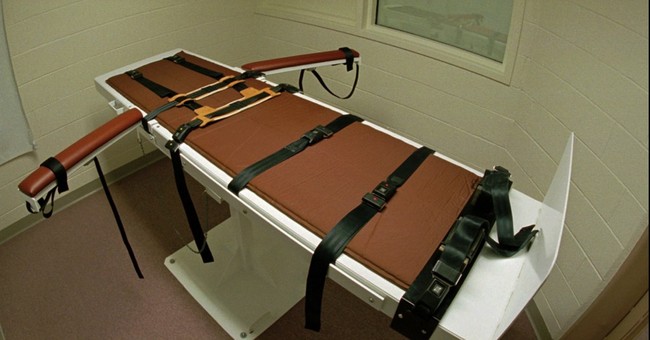 Last year, CNN's "Death Row Stories" ran an episode about a California woman convicted of first-degree murder and then freed when a federal judge overturned the verdict because prosecutors had withheld evidence. I had a few issues with the episode, in part because Gloria Killian was not tried for capital murder and never spent a minute on death row. I wrote at the time that CNN should rename the series, narrated by capital punishment opponent Susan Sarandon, "Death Row Propaganda."

On Sunday night, I can be seen on an episode of "Death Row Stories."

The subject is San Quentin death row inmate Kevin Cooper, who was convicted of the brutal murder of Chino Hills, California, chiropractors Doug and Peggy Ryen, their 10-year-old daughter, Jessica, and an 11-year-old overnight guest, Christopher Hughes, in 1983. Cooper had escaped from a nearby prison and holed up in a vacant rental house that overlooked the Ryen home when he decided to head for Mexico. Before driving away in the family station wagon, he butchered the Ryens and Christopher and left for dead son Josh, then 8, with his throat slit.

The evidence against Cooper always was overwhelming. "It is utterly unreasonable to suppose that, by coincidence, some hypothetical real killer chose this night and this locale to kill; that he entered (the neighbor's) house just after defendant left to retrieve the murder weapons, leaving the hatchet sheath in the bedroom defendant used; that he returned to the (neighbor's) house to shower; that he drove the Ryen station wagon in the same direction defendant used on his way to Mexico; and that he happened to wear prison issue tennis shoes like those of the defendant, happened to have the defendant's blood type, happened to have hair like the defendant's, happened to roll cigarettes with the same distinctive prison-issued tobacco, and so forth," reasoned a 1991 California Supreme Court ruling. That's why a jury convicted him.

There was a time when a reasonable person might question Cooper's culpability, if only because of the crudeness of 1983 forensics. Former Pomona, California, cop turned private investigator Paul Ingels thought Cooper could be innocent; it was hard for Ingels to fathom how one man could wield a hatchet, an ice pick and one or more knives to such brutal effect. Ingels went to work for Cooper's defense team as lawyers argued that DNA testing, unavailable during the 1985 trial, would exonerate Cooper.

When the tests finally were done, DNA nailed Cooper to the crime scene, where he claimed never to have been. In 2004, Ingels told me, "It proves, beyond any shadow of a doubt, that Kevin Cooper was involved in the murders."

When Cooper's lawyers devised this elaborate story about officials framing Cooper by manipulating DNA, forensics expert Edward T. Blake objected because he relies on those tests to exonerate innocent convicts. When I asked Blake whether Cooper is guilty, Blake answered, "Yeah, he's guilty, as determined by the trial and the failure of a very extensive post-conviction investigation to prove otherwise." Blake also had worked for Cooper's defense team.

I've covered a lot of crime stories. I've never had two people who worked for the defense tell me an inmate is guilty. The other aspects that really stick out in this story are the viciousness of the murders and the scars that will never heal for the Hughes family and Josh Ryen.

Despite Cooper's copious criminal record, he always has managed to find advocates who will maintain his innocence. No fact can deter them. They have this romantic conceit that their pious opposition to the death penalty gives them a window into clues unseen by prosecutors, judges and jurors. They excuse the brutality of sociopaths -- while viewing death penalty supporters as bloodthirsty louts. And they have this burning need to believe that death row is bursting with innocent men.

Gov. Jerry Brown personally opposes the death penalty, although he swore to carry out California's capital punishment laws when he was state attorney general. In 2012, I asked Brown about potentially innocent people on death row. Brown answered that when he looked at death row, he saw good lawyering -- "exquisite due process" -- and could not name one innocent person. That's the real, if dirty, death row story.