Not a Perfect Ending but a Better Ending 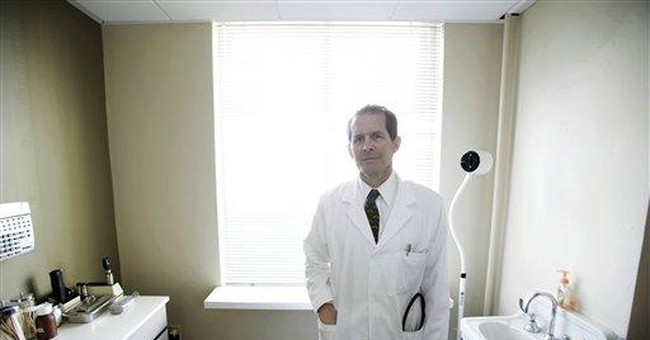 My friend Julia died as we knew she would. Cancer had ravaged her body for a decade. She no longer could breathe. She was at home, under hospice care, when she asked for a dose of morphine that she knew would kill her but also keep her final moments free of pain.

I mention Julia's death because a blogger named Jazz Shaw took issue with my Sunday column, "Assisted Suicide -- It's Civil Rights for the Affluent." Doctors have been killing people with morphine overdoses for the past century or so, he wrote. And: "Forcing someone to suffer to the last bitter moment because you want to save them from burning in hell is not dignity."

I don't know any credible opponent of assisted suicide who opposes doctors administering needed pain control, including lethal doses if necessary. That's how medicine is supposed to work. Doctors alleviate pain. They prescribe not with the intent to kill but to stop suffering. If a patient dies from needed pain control, so be it. That's how a compassionate health care system should work.

I'm revisiting the issue because there is so much misinformation -- like Shaw's -- about the issue. I've received emails from readers who talked about loved ones who endured unwanted treatment. They don't seem to know that patients have the right to refuse medical treatment.

Last week, I watched ALS patient Christina Symonds, 43, assert that she does not want to live her "last days in a wheelchair, fully paralyzed, connected to a breathing machine."

"She can refuse a breathing machine," bioethics professor Bill Hurlbut, of Stanford University, told me. Also: "The argument that ALS is a very terrible way to die -- you have to feel for that argument; you have to feel the sadness of that. But the alternative is" to turn medicine away from being a healing profession. "The minute we start participating in promoting the end of life with the intention of ending it, then we have a different relationship with the patient, and fear will enter the equation when people enter the hospital."

So let me repeat: Doctors can and should use pain control to alleviate pain and suffering. Palliative sedation is available to those who fear a bad end. And patients are free to refuse treatment -- an important right. These safeguards do not guarantee the sort of choreographed final moments that "death with dignity" advocates seem to think they will get if more states legalize physician-assisted suicide; they do give patients the wherewithal to make the most of their last years, months or days. A hospice near me has the perfect motto: "Design a better ending."

If you remove disinformation about inadequate palliative care and treatments being forced on people, advocates are left with one argument: Choice. They say they should be able to choose when they die. I agree, but if you want to kill yourself, no government can stop you. This point tends to enrage advocates, who feel that they have the right to choose when they die and have someone else help them. They want to pervert health care to cater to their perfect death ceremonies. That is their sorry idea of dignity.