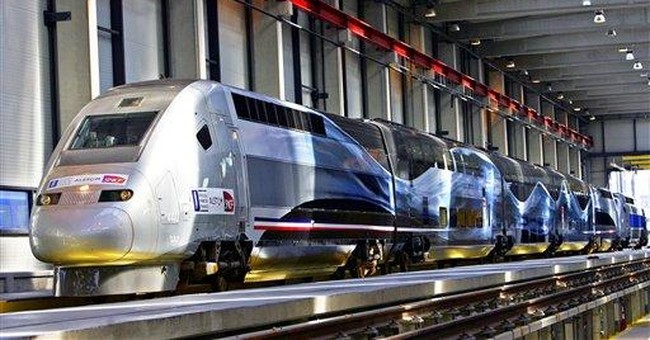 Trending
Democratic California state Sen. Joe Simitian probably is best-known as the author of California's bill to ban the use of hand-held cellphones while driving. After Friday's vote, Simitian may be best-known as the Democrat who warned his colleagues not to issue $4.6 billion in bonds for big-ticket high-speed rail.

"Any of us who talk to our folks know that they're asking the same questions," Simitian reasoned. "They're saying, 'Really? You made these cuts. We're threatened with more. And you want to build a high-speed train?'"

Bold or foolhardy? According to a recent Field Poll, Brown's tax increase measure on the November ballot has the support of 54 percent of California voters. That's a tight lead, as 21 percent of the measure's supporters said they would be less likely to vote for Brown's tax initiative if the Legislature began funding high-speed rail.

The state Senate's vote to issue the first high-speed rail bonds guarantees the flow of $3.3 billion in promised federal funds, Simitian noted, but how will lawmakers feel if they wake up Nov. 7 to find that voters rejected Brown's higher taxes? In that event, Sacramento will have to impose billions of dollars in budget cuts.

The yes votes do have a leg to stand on: In 2008, voters approved a bond measure to fund the first $9.9 billion for a high-speed rail project, now expected to cost $68 billion, to connect Los Angeles and San Francisco via the Central Valley. A recent Field Poll shows that voters would reject it today.

What seemed like a good concept has not fared so well in the planning stage. For starters, it's in the wrong place. The Obama administration made clear that California would not get federal money unless construction starts with a 130-mile stretch between Bakersfield and Madera. Given the sparse population, wags took to calling the project "The Train to Nowhere."

It's at the wrong time. Most Californians won't be able to use it for a decade. Besides, if folks want to get from LA to SF quickly, they can fly, without tapping state coffers anew.

State Senate President Pro Tem Darrell Steinberg, D-Sacramento, urged lawmakers to support the project: "How many chances do we have to vote for something this important and long-lasting?"

Every GOP state senator voted against the bill. All Democrats but Simitian and three others voted for it. One, Mark DeSaulnier, is chairman of the Senate Transportation Committee. Another, Alan Lowenthal, used to be. Be afraid; these transportation-loving Democrats knew more about the high-speed rail project than most Democrats -- and still they voted no.

Republican state Sen. Doug LaMalfa pushed to put the 2008 high-speed rail bill back on the ballot for a revote, but that effort failed.

No worries. California voters actually do have an opportunity to weigh in on the high-speed rail bonds. In November, they will approve or reject the governor's initiative to raise the sales tax by 0.25 percent, as well as income taxes on high-income earners.

If Californians believe that Sacramento shouldn't take on a dubious high-ticket rail project when the state is so broke that it has to raise taxes, they can vote no.