Feinstein Takes On Culture of Leaks 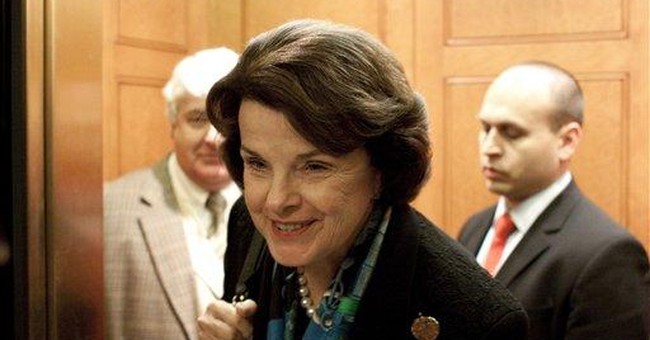 Trending
It was gutsy for Senate Intelligence Committee Chairwoman Dianne Feinstein to come out against Washington's recent rash of dangerous intelligence leaks last week; she made criticism of the leaks bipartisan. Flanked by the House Intelligence Committee's ranking Democrat, Dutch Ruppersberger, and GOP committee leaders, Feinstein declared: "This has to stop. When people say they don't want to work with the United States, because they can't trust us to keep a secret, that's serious."

A week later, Feinstein is more than halfway through New York Times reporter David E. Sanger's book "Confront and Conceal: Obama's Secret Wars and Surprising Use of American Power." She told me Wednesday, "You learn more from the book than I did as chairman of the intelligence committee, and that's very disturbing to me."

The Beltway has become a giant sieve. News reports outed a Pakistani doctor who had set up a phony vaccination program to obtain information on Osama bin Laden's location in Abbottabad. After an unusual proceeding last month, a Pakistani official found Dr. Shakil Afridi guilty of treason and sentenced him to 33 years.

Another leak revealed that a double agent had obtained a new and improved al-Qaida underwear bomb in Yemen. That leak, Feinstein said, endangered an ally and the individual who saved American lives by procuring the bomb.

Former CIA spokesman Bill Harlow told me the two Times stories "left a trail that Helen Keller could follow," one that leads to "a small universe of people." National security adviser Thomas E. Donilon talked on the record, while other officials spoke on condition of anonymity.

The Obama administration has no trouble prosecuting low-level and midlevel leakers. Obama's feds have prosecuted six cases, double the number prosecuted by previous presidents. Yet the Department of Justice has been slow to respond to spin stories that play up Obama's national security acumen but also give away too much information.

This crusade can't be helpful to DiFi politically. Many in her liberal base regard accused leakers, such as Army Pvt. Bradley Manning, not as security threats but as heroic whistle-blowers. "As we all know," her political guru Bill Carrick conceded, "there are people who think they want to know all this stuff, and they don't want any restriction of information, no matter what the potential damage might be."

But also, it's not clear that a special prosecutor could do much about leaks from political aides. Former Dick Cheney aide Scooter Libby was convicted not for leaking the identity of former CIA operative Valerie Plame but for lying about it. If aides say they didn't know something was classified or if they can show they were authorized to speak, it seems there is no crime.

At Friday's news conference, Obama said: "The notion that my White House would purposely release classified national security information is offensive. It's wrong." But what if aides leaked key intelligence accidentally on purpose?

Feinstein is working on new administrative procedures to curb leaks. Violators, she explained, might lose their security clearance -- or their jobs.

The real problem seems to be rot at the top. How do you impose the need for silence about underwear bombs or phony vaccines when White House stars are bragging about their exploits in The New York Times?

Remember the Libby trial. Washington clamored for Libby's scalp for a leak that did less damage than the likely fallout from leaks on thumb drives, double agents and vital assets. Considering what's at stake, there should have been 99 senators and one president standing with Dianne Feinstein.

Trump Rising
Townhall
'I'm not the scientist': Masked Joe Biden wraps up his COVID19 booster shot by moving the 'back to normal' goalposts to unattainable lengths [videos]
Twitchy
The Arizona Audit Findings the Media Doesn't Want You to See
Redstate
The Collapse of Biden's World
PJ Media