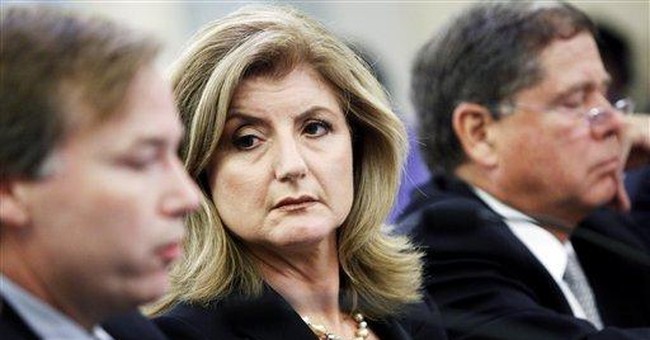 In one of her many iterations, Arianna Huffington targeted "corporate greed" as a force undermining America. That was during one of her populist phases, which frequently are followed by Huffington morphing into what she once scorned.

Score another transformation for La Huff. On Sunday, AOL announced it would pay $315 million, mostly in cash, to buy the left-wing website she co-founded, Huffington Post. The merger and acquisition also will place Huffington at the helm of AOL's new Huffington Post Media Group division.

AOL CEO Tim Armstrong announced that the deal will create a "digital ecosystem" -- which may be more prescient than he intended it to be.

Whatever happens, you have to admire Huffington's chutzpah. Having played the left-wing card to attract like-minded readers, Huffington and her venture capitalist pals will have made millions off a website that doesn't pay most of its writers.

Remember HuffPo's big scoop during the 2008 presidential election? Writer Mayhill Fowler recorded then-presidential candidate Barack Obama as he told swells at a San Francisco fundraiser that blue-collar voters "get bitter" and "cling to guns or religion or antipathy to people who aren't like them."

As Fowler opined on her own Nattering On blog Tuesday, the merger "gives the lie to (Huffington's) frequent assertion this past year that she is pro Main and con Wall Street. Of course, the hypocrisy of her 'let's hear it for the little people' mantra has already been undercut by her refusal to pay bloggers like me."

Unbowed, Huffington announced that the AOL deal comes just in time to build "an incredible infrastructure for citizen journalism in time for the 2012 election."

I wonder if the next batch of citizen journalists can spell the word "sucker."

Last month, HuffPo made news when Rep. Joe Courtney, D-Conn., wrote on the website that GOP members who voted to repeal Obamacare should "do what they are asking of millions of Americans by purchasing insurance on the open market and forfeiting their taxpayer-funded coverage."

Courtney hit the GOP for "hypocrisy." OK, so what does he calling writing for a website that doesn't pay many of its contributors? Never mind paying for health care.

Fowler keeps waiting for the moment when high-profile Democrats realize "that they cannot say one thing and do another: to talk sympathy for working people and yet blog at a site that treats its writers badly." Fowler should not hold her breath.

Then she rode that left-wing discontent all the way to the bank. Now she writes like a corporate flack, lauding the "merger of visions" made possible after business-savvy CEO Eric Hippeau "monetized" the Huffington Post.

Corporate greed? The New York Post reported that since Feb. 1, AOL shares declined some $2 per share -- devaluing the company by about $315 million, or what AOL agreed to pay HuffPo. At least in this case, the market has taste.