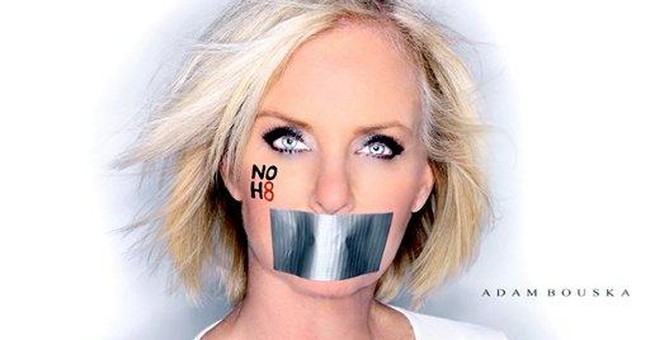 Forget the law. Chief U.S. District Judge Vaughn Walker has allowed the trial over a challenge to overturn Proposition 8 -- the 2008 California ballot initiative that limited marriage to "a man and a woman" approved by 52 percent of California voters -- to turn into what the measure's opponents like to call a "teachable moment." That's another way of saying that the law isn't as important as feelings in this trial.

Feelings rule -- and not just because the measure's foes somehow believe that Californians haven't been taught enough about gay people. Anti-8 attorneys have chosen to argue that Proposition 8 is unconstitutional in light of a 1996 U.S. Supreme Court decision that overturned a Colorado ban on gay-rights measures because it was motivated by animus toward homosexuals. If they can convince Walker that the Proposition 8 people are haters, he may overturn the will of the majority of California voters.

Plaintiff Kristin Perry of Berkeley testified in the first week of trial, "The state isn't letting us be happy." You know, that's the way a teenager talks -- yet it now rates as evidence in Walker's court.

On Tuesday, the feelings-a-thon continued with Republican San Diego Mayor Jerry Sanders as star witness for Proposition 8 foes. Sanders used to oppose same-sex marriage, but favored domestic partnerships for same-sex couples. In 2007, the San Diego City Council passed a resolution supporting San Francisco's legal efforts supporting same-sex marriage. Sanders' lesbian daughter, Lisa, told him it was OK if he vetoed the measure. She explained in a press conference later that it was "more important" that her father remain mayor of San Diego.

Nonetheless, a teary-eyed Sanders supported the resolution. He testified that his earlier support for civil unions had been "grounded in prejudice." And: "I was discriminating even against my own daughter."

Sanders also said, however, that his support for civil unions was not based on "moral disapproval" or hatred and that others could support Proposition 8 without animus toward gays. That punctures the "no" side's legal argument.

UCLA Williams Institute researcher Lee Badgett also testified for the anti-8 folks. She talked about the economic advantages of same-sex marriage as opposed to civil unions. But as pro-Proposition-8 attorney Chuck Cooper noted, Badgett herself wrote an October 2006 op-ed piece supportive of civil unions that referred to domestic-partner law as "equal treatment of same-sex couples."

Was Badgett a hater who wanted to hurt gay people in 2006? Did she want to treat the two couples as, to quote the complaint, "second-class citizens?" When Lisa Sanders told her father he could oppose same-sex marriage, was she intent on "stigmatizing gays and lesbians"?

Of course not. Domestic partnerships exist to recognize and provide legal protections for committed gay and lesbian couples. But after Mayor Gavin Newsom decided to flout marriage law and open up City Hall to same-sex marriages in 2004, the ground shifted.

I'm happy for those same-sex couples married during San Francisco's 2004 Winter of Love, before voters passed Proposition 8. But any attempt to force same-sex marriage legalization through the courts makes it impossible to pre-empt possible unintended consequences.

My fear: that someday, some judge will recognize polygamous marriages lest a family in Berkeley feel unhappy or because anti-polygamy laws discriminate on the basis of religion. If the no-on-Proposition-8 argument prevails, why not?

Besides, after hundreds, arguably thousands, of years of Western marriage limited to heterosexual couples -- with the occasional but never-lasting recognition of polygamy -- a humble society ought to hesitate before upending a tradition that has worked. A court fiat is not how a smart society makes deliberate and informed decisions.

This lawsuit may not be about Proposition 8 alone. If Walker strikes down Proposition 8 and the U.S. Supreme Court backs him, you could see a same-sex marriage ruling as sweeping as Roe vs. Wade.

And to think that the outcome could hinge on whether the "no" side successfully establishes animus. Toward that end Thursday, anti-8 attorney David Boies succeeded in marginalizing Proposition 8 supporter Hak-Shing William Tam, by prompting Tam to admit he believes homosexuals are 12 times more likely than heterosexuals to molest children. Talking to the press later, the Yes on 8 folks tried to distance themselves from Tam, but he was one of the measure's official proponents.

Thing is: Tam does not speak for the 7 million Californians who voted for Proposition 8. Boies' colleague Ted Olson, who beat Boies in the rancorous legal battles over the 2000 Florida recount, made a strong argument for same-sex marriage in a recent Newsweek. But he did not make a strong "conservative" case, as he claimed. While many conservatives support same-sex marriage, a conservative should want to debate the possible consequences of upending family law. A good conservative doesn't push a court to impose a ruling that shreds states' rights, as well as the right of Californians to govern themselves.