The Long and the Short of Steve Poizner 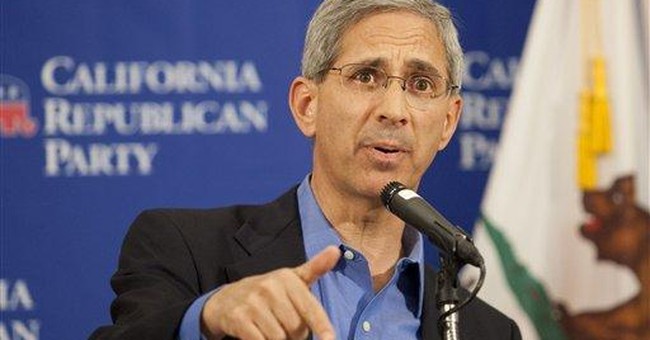 Why isn't Insurance Commissioner Steve Poizner doing better in his bid for governor? On paper, Poizner is a solid contender.

He's the only Republican elected to statewide office in California who hasn't starred in a blockbuster film. He's a successful entrepreneur who struck it rich developing global positioning technology for cell phones. Later in life, he turned to public service, first as a volunteer schoolteacher, then as a candidate for state Assembly. He is a pro-choice Republican who has been able to reach out to the party's conservative base.

Yet in the latest Field Poll on the GOP primary, Poizner placed last -- garnering support among 9 percent of likely GOP primary voters. Former eBay CEO Meg Whitman led with 22 percent of those polled, followed by former Congressman Tom Campbell, a renowned wonk not known for fundraising prowess, at 20 percent.

Now, Poizner could be doing poorly because the campaign has not really begun. As veteran GOP pollster Steve Kinney noted, "Most of the battle right now is inside baseball." Indeed, the biggest winner in the Field Poll among GOP voters was undecided -- at 49 percent.

But in the race among people who are paying attention, Poizner is not where he should be. GOP eminences grises -- like former Gov. Pete Wilson, Rep. Ed Royce and Rep. Dan Lungren -- would be expected to back the candidate who paid his dues and has shown he can win statewide; instead they've endorsed Whitman, the newcomer with a spotty voting record.

Former state GOP Chairman Bob Naylor even switched his endorsement from Poizner to Whitman. Naylor told me Poizner's "a great guy" with a "great command" of the landscape, but he believes Whitman has a better chance of attracting independent and Democratic voters. "It's more tone than anything else -- and electability."

GOP strategist Allan Hoffenblum believes that Poizner lost the party's centrist graybeards by moving too far to the right in his bid for the top. When Poizner ran for state Assembly in 2004 and lost, he styled himself as "a frustrated moderate Republican," who would not say if he voted for George W. Bush in 2000. In his run for governor, however, Poizner courted the sort of Republicans who grouse that Bush wasn't conservative enough.

Poizner's transition to the gung-ho side of the GOP, Hoffenblum noted, makes insiders wonder, "Is he another Mitt Romney?" (Romney was a maverick Republican when he ran for governor of Massachusetts, then he tilted all-right as a candidate for president.)

Poizner spokesman Jarrod Agen acknowledged that Poizner's political philosophy has undergone a journey. "The more he got involved in politics, the more he saw what happens in Sacramento and saw exactly how spending was being abused and what the high tax burden does, the more conservative he became on fiscal issues."

Some Poizner critics resent the way the insurance commissioner trashed this year's budget deal signed by Gov. Arnold Schwarzenegger because it included tax increases. Yes, they know Whitman trashed it, too. Yes, they know how close Whitman and Poizner are on the issues. But they like her tone better.

Whitman's deputy campaign manager, Tucker Bounds, believes Poizner is floundering because "he is an underwhelming candidate who's been running a subpar campaign and was virtually denying any tie to the Republican Party just a few years ago."

Ouch. Jon Fleischman, publisher of the conservative FlashReport blog, acknowledged the everyman-versus-superwoman factor: "Steve is very much a kind of an ordinary guy as opposed to Meg Whitman, who carries with her a bit of celebrity."

She's a Silicon Valley star who gets the endorsements of Wilson, Romney and Sen. John McCain, R-Ariz., because they're members of the Fellow Big Shot Club, while Poizner is at heart an engineer, who, like rival Campbell, actually shows up at the debates.

There is an undersize elephant in the room -- the Stature Issue. When Whitmaniacs tell you that Poizner is "underwhelming" or "unimpressive," you have to wonder if what they really mean is -- not that they'd want to admit it because it's soooo superficial -- he's short.

He's not Gary Coleman short, and he's taller than Napoleon Bonaparte. But he is short, and he wears glasses and you have to wonder if his button-down looks keep Poizner from wowing the fundraiser circuit.

How short is he? "This isn't the NBA draft," Agen shot back. "This is serious; we're electing a governor. Voters want somebody who's going to bring the jobs back."

Of course, Agen is right. Performance -- not size -- is what matters. Besides, as Hoffenblum scoffed, "Not enough voters know what the candidates look like."

Portland's Tourism Agency Begs People to Come Back to the City After Months-Long Riots, Rising Crime
Julio Rosas
Here's What the American People Really Think of the 'For The People Act'
Spencer Brown

Reagan McCarthy
Teachers Union 'Study:' The Most Stressed Out People During the Pandemic Were...Teachers, Of Course
Guy Benson
Biden Will Attempt to Get Ahead of a Summer of Crime Created by the Left
Katie Pavlich

Tucker Carlson Just Broke Don Lemon on Live Television
Townhall
'WTF are they trying to pull?!' Conservative woman takes Sarah Kendzior's SMUG digs at those opposing CRT apart in EPIC thread
Twitchy
Candace Owens and Brandon Tatum Are Not Who They Pretend to Be
Redstate
The Morning Briefing: Let's Hope the Commie 'For the People Act' Dies in the Senate
PJ Media