Oil and Water Mix in Ecuador 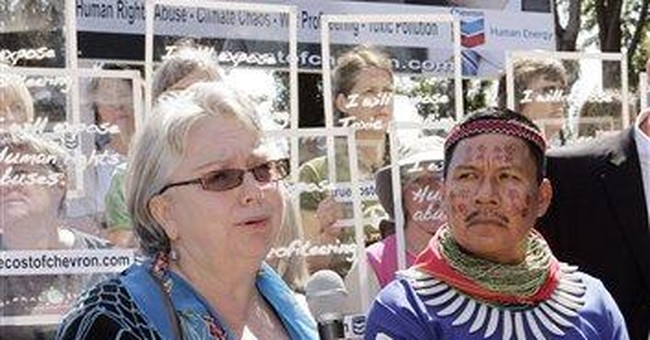 "We certainly recognize that Chevron does not make a sympathetic victim here," company spokesman Kent Robertson told me over the telephone. No lie.

In May, "60 Minutes" ran a TV report on Ecuadorans in the Lago Agrio area -- with graphic video of foul-looking petroleum waste pits -- who are suing Chevron for damages and to clean up toxic oil waste in their village. One of the plaintiffs, Emergildo Criollo, showed up last month at Chevron's shareholder meeting, where he said he had lost two children and an aunt to health problems he blames on oil-field contamination, as The Chronicle's David R. Baker reported. "We don't want to keep dying," Criollo said through an interpreter.

Oh yeah, and because Chevron lawyers convinced a federal judge in New York that Ecuador had legal jurisdiction, the trial will be in Ecuador, where Chevron now says it does not expect to get a fair trial. A court-appointed expert has assessed the oil giant's damages at a whopping $27 billion. It's like Bingo.

I can't think of an American who would find it acceptable to live near the contaminated pits of toxic oil waste shown on "60 Minutes."

Sierra Club Executive Director Carl Pope put the natural reaction to Chevron's plight simply at a June 10 Commonwealth Club event with Chevron CEO David O'Reilly: "If I spill my milk and I didn't mean to, I still have to clean it up."

But 20-plus years later and after a predecessor paid for a cleanup? That's not cleaning up -- it's extortion.

That's why Chevron has a case.

Chevron inadvertently bought this nightmare when it purchased Texaco in 2001. Texaco had held a 37.5 percent interest in a consortium with the state-run oil company Petroecuador from 1964 to 1992, when it turned the whole operation over to Petroecuador. In the 1990s, Texaco and Ecuador reached an agreement, under which Texaco spent $40 million cleaning up some of the sites (because the company owned only a portion of the venture).

"In return for that" $40 million cleanup, "60 Minutes" reporter Scott Pelley asked attorney Steven Donziger, who represents Ecuadoran Amazon residents who filed suit against Texaco in 1993, "the Ecuadoran government signed off and said you're released of liability. How can you have a lawsuit now?"

To which Donziger replied, "Well, our clients never released Texaco."

Mitch Anderson of Amazon Watch -- an independent human rights and environmental organization that supports the Amazonians' lawsuit -- argues that Chevron should settle because this 16-year-old litigation has turned into "a legal Vietnam."

But in Donziger's answer, you see the very reason why Chevron has no incentive to settle.

For starters, Chevron execs can argue that Petroecuador owns the pits and that Ecuador should have cleaned up the mess years ago. And rightly so. They can point to a similar but separate lawsuit against Chevron, which a federal judge in San Francisco dismissed because the attorneys for those Ecuadoran plaintiffs "manufactured" cancer claims.

But the main reason why Chevron can't settle is that any deal it makes with the villagers of Lago Agrio could only serve to encourage more lawsuits.

Indeed, when I asked Amazon Watch's Anderson if other Ecuadorans should sue Chevron if the corporation reaches a settlement with the Lago Agrio residents, he would not answer yes or no. He said, "We think that Chevron is entirely responsible for environmental disaster and the human rights problems in Ecuador." Which sounds like: Yes.

And that certainly lets Petroecuador and Ecuador's President Rafael Correa off the hook, doesn't it? His government can fail to clean up oil waste, fail to clean up drinking water, and human rights groups blame a company that left the country two decades ago.

The villagers must figure that they stand to make out better with a foreign big bad oil company than with their own elected government.

In December, Ecuador defaulted on its foreign debt -- which Correa called "immoral and illegitimate."

It's been my experience that large corporations prefer settling lawsuits that make them look bad. And Chevron does not look good when spokesmen make claims like this one from Robertson: "The idea that oil is making people sick is something that has yet to be substantiated." Chevron argues that fecal matter and bacteria have poisoned the water. Maybe, but even if you boiled it for days, you couldn't get me to drink that stuff.

Still, I have to agree with Robertson's point that if Chevron loses, then "You're going to have American companies that are getting taken to the cleaners over and over again not on the basis of evidence, but on the basis of emotion and populism and near-term political gain."