Revenge of the Boxes 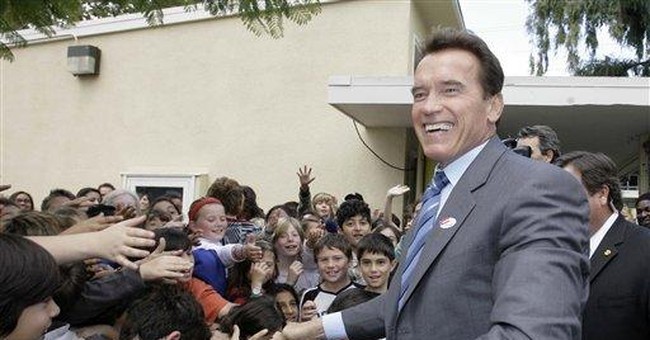 Ever since California voters recalled Democratic Gov. Gray Davis in 2003 and replaced him with Republican Arnold Schwarzenegger, Sacramento has been passing gimmicky state budgets that did not raise taxes, but also kicked structural deficit spending into the next year.

Well, the party's over.

In September, Schwarzenegger signed another kick-the-shortfall budget. Then the Wall Street meltdown caused capital gains to disappear, rich people's income to retract and state revenues to shrink. As the Legislative Analyst reported this week, the state budget shortfall could reach $28 billion over the next two years. State Department of Finance spokesman H.D. Palmer noted the drop in state revenue represents "not a trend, but a seismic event."

The earth has moved. The anti-tax governator has called a special session to address the budget shortfall, and he has renewed his call for the Legislature to raise taxes. Schwarzenegger has proposed more than $10 billion in spending cuts on education, health care and social spending through 2010. And $14 billion in tax increases, including a "temporary" 11/2-cent increase in the sales tax, an extension of the sales tax on such services as car repairs and veterinary (but not legal) bills, a severance tax on oil production and a 5-cents-per-drink spike in the tax on alcohol.

Why not squeeze the rich more? In California, the top 1 percent of taxpayers pays 40 percent of personal income taxes -- which makes revenues rise and plunge wildly. A sales tax is more stable and would force those in the underground economy to contribute to the services they nonetheless enjoy.

Hey, maybe the money will fall from the sky. Assembly Speaker Karen Bass thinks Washington can fork over $5 billion per year for three years. If Washington can reward Wall Street greed, why not capital greed? Although, that still won't balance Sacramento's books.

State Finance Director Michael C. Genest has put together a slide show that takes on budget myths, including the oft-heard complaint that state spending is out of control. Nonsense, Genest argued, spending "has been brought under control in the past couple of years." A chart shows general fund spending at $101.4 billion in fiscal year 2006-07, $103.3 billion in 2007-08 and $103.4 billion in 2008-09. If the new proposed cuts are enacted, spending for the 2008-09 budget will fall to $98.9 billion.

When he took office, Schwarzenegger promised that he would not just shuffle departments, but that he would "blow up boxes" to reform state government. He created a California Performance Review, which issued recommendations that were supposed to save $32 billion over five years. Then Schwarzenegger failed to follow through. Maybe the projected savings never would have materialized, but Schwarzenegger couldn't even dump the advisory boards that he had boasted he would eliminate.

As Joel Fox, a GOP strategist and editor of Foxandhoundsdaily.com, told me, Schwarzenegger should have cut spending early on; he "should have spent (his political) capital up front, and he'd be better off for it."

Today, many Republicans are making the same argument as they oppose any tax increases. Fox remembers how the same right wing "sat on their hands" when Schwarzenegger's budget reform measure was on the ballot in 2005.

"Then he's defeated," Fox added, "and he moves in a different direction, and they all beat him up."

Democratic lawmakers seem willing to go along with Schwarzenegger's spending cuts. Their dirty little secret is: They don't want to raise taxes, either.

They've been able to expand government precisely because Republicans have assured the public that taxpayers will never have to pay for new programs.

Schwarzenegger has learned that when he does his job best, his poll ratings fall. He set out to blow up the boxes, but in the end, the boxes blew up on him.