But What Kind of Stimulus? 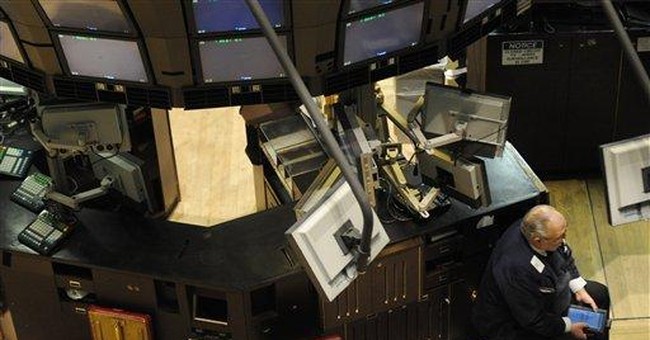 Economist Kevin Hassett, an adviser to Republican presidential candidate John McCain, described the proposed $145 billion economic stimulus package being negotiated by President Bush and the Democrat-led Congress as I write this column, this way: "It's like borrowing money from the Chinese that we can then drop from a helicopter." (That quote comes from Chronicle staff writer Carolyn Lochhead.) McCain is a long-road kind of guy and his stimulus package essentially involves making the Bush tax cuts permanent and reducing the corporate tax rate to create jobs.

It's not clear what the Bush/Democrats package will hold. Yes, there will be checks of up to $800 for taxpayers. In addition, Democrats are pushing for an extension of unemployment benefits and an increase in food stamps; Republicans want cuts in business taxes to spur job growth.

Edward Lazear, chairman of the president's Council of Economic Advisers, noted, "I find it surprising that people use words like recession" when the nation's unemployment rate is at 5 percent. On the left, Chad Stone, chief economist for the Center on Budget and Policy Priorities, noted, "We don't know [if] we're in a recession or not. We're in a weakening economy compared to the middle of last year when growth was 3 or 4 percent."

You know what that means: Even when the left and the right aren't sure if there is a recession, they can always get together on a plan to give away money -- especially in an election year.

I can't say they're wrong. And because they're going to do it anyway, I hope they're right.

Stone supports a stimulus package that sends checks to low-income workers who do not pay federal income taxes, extends unemployment benefits and increases food stamps. If the economy is slowing, Stone argued, such a stimulus package would prompt families living from paycheck to paycheck to spend more -- and that should boost confidence in the market.

But when Stone talks about giving so-called rebates to workers who do not pay federal income taxes -- well, that's an overly generous use of money the federal government does not have. Also, it seems insane to extend unemployment benefits when the unemployment rate is at 5 percent. (The administration is likely to argue that if there is a benefit extension, it would be targeted only at high-unemployment states.)

To my concern that the stimulus package is more deficit spending, Stone has a good answer: This is a one-time shot that won't keep adding to the deficit. And: "Stimulus is triage. You worry about the long-term health of the nation; you do things you wouldn't do to a healthy nation."

From Bushworld, Lazear had a similar take. The stimulus package would keep an economic slowdown from becoming a recession. Look at it, he argued, as an insurance policy to keep "a half million Americans working who otherwise would not have jobs."

As for my fears about deficit spending, Lazear countered, "The deficit right now is very low," -- 1.2 percent of gross domestic product -- "let's not get hysterical about it." The big problem looming over this country comes not so much from annual spending, but from unfunded Social Security and Medicare promises.

Once again, the easy thing -- spending money we don't have and sending voters checks as high as $800 -- can be seen as the right thing to do. It's an argument of bad short-term behavior for a good long-term gain. Meanwhile, the day of reckoning -- paying off the $35 trillion in unfunded mandates that amounts to $156,000 for every American man, woman and child -- awaits.

Stanford economics professor John Taylor, also a McCain adviser, noted that McCain's opposition to personal rebates in favor of permanent tax cuts is "quite courageous. Just to increase the budget deficit by $150 billion and have marginal impact is not good policy."

That's the other hitch in this stimulus package, whatever it might be: It better work.