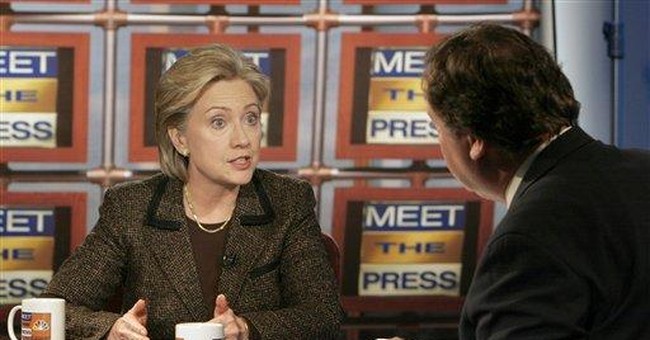 On "Meet the Press" Sunday, Democratic presidential hopeful Sen. Hillary Clinton repeated her bogus claim that she voted for the Iraq War resolution because she thought it was "a vote to put inspectors back in to determine what threat Saddam Hussein did, in fact, pose." She's taking heat for her vote on the war. What to do? Deflect the heat from her record.

So she hit Barack Obama for not being sufficiently anti-war. It's not enough that, as an Illinois state senator in 2002, Obama delivered a speech against the war, Clinton charged Sunday, because he pulled a video of that speech from his Web site in 2003. He waited 18 months after he was elected to the U.S. Senate to deliver a speech against the war on the Senate floor.

In 2004, Obama told the New York Times he isn't sure how he would have voted on the war. (Forget that he said so the week of the Democratic National Convention as he was stumping for John Kerry, who had voted for the war.) As a candidate in 2004, Obama had said he would vote against funding the war. After he was elected, he voted to fund the war, he said, to protect U.S. troops.

Also, Obama flip-flopped on the timeline issue -- he was against a withdrawal timeline before he was for one. It is Obama's opposition to the war, Bill Clinton said, that amounts to "the biggest fairytale I've ever seen." The Clintons' call for greater scrutiny on Obama's Iraq record is handy, considering how poorly Hillary answers scrutiny of her own record.

Yes, the flip-flops on funding and timelines should prompt Democrats to ask themselves about how Obama would govern if sent to the White House. But why does Hillary Clinton think Obama's Iraq record is problematic? When Obama said in 2004 he wasn't sure how he would have voted, Clinton argued, "Well, the fact is, he's always saying that he doesn't take positions for political reasons. That is a political explanation."

When "Meet the Press" host Tim Russert asked Clinton if Obama showed "better judgment" on the war vote, Clinton's reaction was instructive: "You know, look, judgment is not a single snapshot. Judgment is what you do across the course of your life and your career." Russert responded, "A vote for a war is very important vote."

To which Clinton said, "Well, you know, Tim, we can have this Jesuitical argument about what exactly was meant." Later, she chided Russert because the first part of "Meet the Press" was spent "talking about a speech [Obama's] and a vote [hers] from 2002."

Think about that. Clinton voted for a resolution that, according to its title, would "authorize the use of United States Armed Forces against Iraq." You had to be a 5-year-old -- or a Democratic senator with presidential aspirations -- to believe that the measure was about putting U.N. inspectors in Iraq. And besides, as she voted for the resolution, Clinton said that a "pre-emptive war" would be "a mistake."

A mistake? Some 165,000 U.S. troops are serving in Iraq. As of Monday, there were 3,921 service members counted as dead. Yet Clinton dismissed her pro-war vote as one of many actions, a quick pic in a montage of moments. Hold it against Obama if his rhetoric flagged, she suggested, but don't hold it against her if she voted for a war resolution thinking it was something else.

I thought Clinton did the right thing voting for the war resolution, but then I was foolish enough to think that, having done so, she would do right by the troops who were tasked with carrying out the will of Washington.

Instead, she turned her back on the mission when the polls showed Americans had soured on the war. Cold to the plight of those who put their lives on the line, she proclaimed in February, "This is George W. Bush's war" -- as if she could toss it like a hot potato. She opposed the surge, which reduced U.S. casualties. She was too busy trying to win the White House to work to win the war.

Hillary Clinton likes to say that she is "rooted in real people." But as her tack on Iraq has shown, to her, real people serving in Iraq are like angels on a pinhead -- subject to Jesuitical argument.