A Joke Too Far 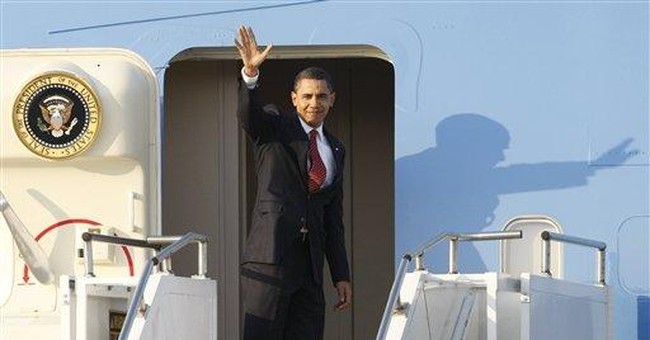 A tasteless joke – one that saw earlier popularity during the administrations of Bill Clinton and George W. Bush – has resurfaced across America.  It is being told in whispers, emails, and even bumper stickers.  During Mr. Clinton’s administration it even found its way into some Sunday church bulletins.  And it is really beneath contempt in its lack of respect for the president, the presidency, not to mention the Bible itself.

It goes something like this: “Pray for President Obama.  Psalm 109:8.”

At first glance it appears innocuous, even pious.  But when time is taken to look up the reference, well, then it’s chortle, chortle time for buffoons:

And the verse following continues the thought:

Of course, the point of the joke is to show disaffection with President Obama.  But the real result is to use scripture in a twisted way and to find somehow funny the idea that our president should, well, come to an ignominious end leaving his family to grieve.

It should be clear to decent, reasonable, reflective, and compassionate people that some things simply aren’t funny.  One just has to look back at what happened 46 years ago this weekend to see that.  I have no clue if that same joke was around in the days of the Kennedy administration, but I know that the feelings of too-casual contempt it reveals were very much around.

I am a conservative when it comes to politics - a conservative with strong libertarian leanings.  I am no fan of much of the political agenda of President Obama and his administration.  Sometimes I get annoyed.  Occasionally (okay, more than occasionally) I talk back to the T.V. when I hear or see something that, to me, does not pass the test of constitutionality or common sense.

I would probably only vote for Mr. Obama’s reelection if the choice was between him and, say, Harry Reid – or Boss Tweed.   I very much believe that the president and his advisors have a socialist bent and that what they are trying to accomplish through Health-Care Reform and Cap-and-Trade machinations amounts to the kind of change Americans really didn’t envision when he was elected last year.

But it needs to be said that a president can be opposed and criticized - even in an animated way - without resorting to the kind of meanness that crosses the line of civility.

I have no problem with partisanship – even a little fiery rhetoric here and there.  America is better when our politics are feisty.   But, come on – using the Bible to make a joke about the man dying before his term is up?

Think back.  Remember John “John-John” Kennedy Jr. saluting his daddy’s casket on that cold November Monday in 1963?   Is there anything funny about that?  Nope, it was all just very sad.  And it bears noting that Mr. Kennedy evoked opinions and opposition from conservative Americans in much the same way Mr. Obama does now.

On the last morning of his life, JFK woke up in the Presidential Suite of the Hotel Texas in downtown Fort Worth, Texas.  As he made his way down to the facility’s Crystal Ballroom to speak to a Chamber of Commerce breakfast gathering of about 2,000 people, he encountered a maid by the name of Jan White, who asked him to sign her newspaper.  He did – probably the last autograph of his life – writing his name near his picture on the front page of that day’s Dallas Morning News.  The headline on November 22, 1963 was: “Storm of Political Controversy Swirls Around Kennedy On Visit.”

The next morning that same paper bore the message: “Kennedy Slain On Dallas Street.”

People mourned.  Americans who had not voted for Mr. Kennedy – and never would have – were deeply impacted by the violent tragedy.  And, in fact, his days were made few, and another was allowed to take his office.  His wife also became a widow and his children were suddenly fatherless.

I’m sorry, but there is nothing funny about that.  Nor is there anything funny about using a passage of scripture as a punch line, one that finds sadistic humor in such depraved darkness as to be at all amused at the potential demise of a national leader.

Of course, I recognize that when George W. Bush was in office, the same things were circulated about him by a few on the other side of the political spectrum.   But some things are simply not funny.  It was wrong when liberals did it – and it is wrong for conservatives to do it.

Shortly before November 22, 1963 - when I was about seven years old – I came home from school one day armed with a joke about President Kennedy.   I cannot for the life of me remember the punch line - or the straight line for that matter.   But I do remember the moment I decided to let ‘er rip at the dinner table that night.   I was sure that I was on safe ground, after all, my parents were Nixon people in 1960 (later Goldwater people in 1964, then back to RN again in ’68) and not big fans of Mr. Kennedy.  I know I had heard my dad criticize the president for this or that, though never in a mean way.  So I thought he would just love my hilarious joke.

I told it with all the skills of a 2nd grade class clown.  Then I waited for the howls of laughter from my parents.   And I waited.  Then after a moment or two – and I can still see and hear this in my mind – came a powerful rebuke from the head of the table, ending with the unambiguous: “Son, don’t ever talk about the President of the United States like that!”

I learned something about respect that day.  It’s something I think about now and again when things heat up politically and I find myself invariably frustrated with politics du jour.  And though I sometimes fly admittedly close to the flame of the kind of disrespect that crosses the line between honest disagreement and just plain malice, I am never comfortable with that kind of indignation – righteous or otherwise.

Anger is toxic, often subtly so.  Certainly there are times when animosity can give way to constructive change.  But while such antipathy can occasionally be the catalyst for ultimate good, it must never be the default fuel.  It is ferociously destructive.

By the way, the use of Psalm 109:8 as a joke applied to President Obama is not only a beneath-contempt expression of ugliness, it is also a profoundly ignorant use of the Bible.   For when you read further in the good book, all the way through the gospels and into The Acts of the Apostles, you find Simon Peter, the recently redeemed Jesus-denier, quoting that very passage in reference to another Apostle who did something abhorrent – Judas Iscariot.

Peter applied it as an epitaph for Christ’s infamous betrayer, though he must have done so with the humility to think, “there but for the grace of God go I.”

All praying people should fervently pray for President Obama and all those in authority – and not tongue-in-cheek petitions.   As yet another Apostle, this one named Paul wrote:

“I urge, then, first of all, that requests, prayers, intercession and thanksgiving be made for everyone, for kings and all those in authority, that we may live peaceful and quiet lives in all godliness and holiness.” – I Timothy 2:1-2 (NIV)