A Community Organizer Takes On the World 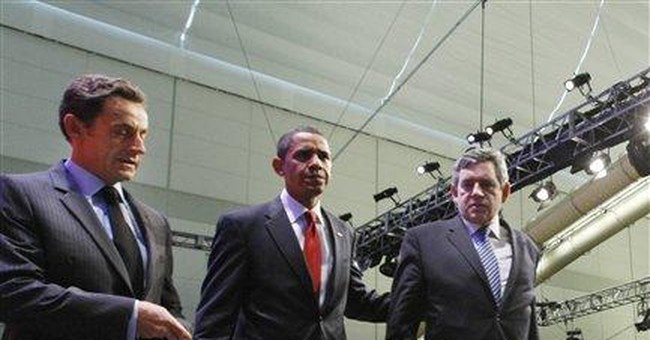 President Barack Obama’s visit to the United Nations this past week, complete with a major address and some quality time with a gavel, was yet another step in the process of seizing a much sought after role.   For decades, U.S. presidents have routinely been referred to as leaders of the free world.  For all practical and theoretical purposes now, though, the appellation “free” no longer applies.

We should now be saying that he’s the leader of the world, period.

Until now, the various elements of a particular president’s philosophy and methodology have usually been categorized dichotomously:  domestic policy and foreign policy.  And since they both involve issues that seldom fly that close to each other – except for issues of trade – the occupants of the Oval Office have generally been analyzed and graded on them separately by historians.

The prevailing wisdom is that a particular president may have been strong on one and weak on the other.  Rare was the leader who got high marks for what he did here as well as his approach to things abroad.  Sometimes it had to do with passion.  Richard Nixon was fascinated with foreign policy, seeing it as the premier role for a president.  And in spite of a solid domestic record (which was impressive in some areas), the 37th President is largely rated highly for his achievements on the international stage.

Even for those who seemed to be effective both domestically and diplomatically, there were few similarities in philosophy and methodology between the two vastly different arenas.  That is, until now.

Mr. Obama has a philosophy that runs as a common thread between his approaches to everything he touches from the U.S. economy, to national security, and even, yes, foreign policy.  What is this important piece of the puzzle?  Simple.  Though he pays lip service to one of the most basic issues of human nature and how people relate to and interact with each other on a micro or macro scale, his actions actually minimize – or at least, marginalize – a fundamental instinct common to every person, group, community, and nation on the earth.

The call du jour from the mountaintop at 1600 Pennsylvania Avenue is for all of us to rise above, or in new age parlance “transcend,” mere mortal self-interest.   On the domestic level this means that capitalism – a mean, primal, greedy, and materialistic approach to economics that steals from the poor to give to the rich – must be replaced (slowly, but surely) with a more enlightened approach; one that emphasizes social justice and the equitable distribution of wealth.

This is all the rage these days.  It may be called “progressive,” but it’s really a barely-if-at-all disguised form of socialism.  If it walks like a duck, it’s a duck.  If it digests food like a goose, it’s…well.

You also start running out of freedom.  Planned economies involve a construct where the individual trades (wittingly, or not) liberty for some perceived value – all supposedly accomplished on the wings of so-called better angels.  The bigger the wings and more aggressive the planners, the greater is the loss of freedom.  Capitalism, on the other hand, though often accused of being selfish and cynical, recognizes man’s inbred propensity for selfishness and taps into it.

The father of capitalism, Adam Smith, who wrote An Inquiry into the Nature and Causes of the Wealth of Nations in 1776, referred to this as a “system of natural liberty.”  And flaws, cycles, weaknesses aside, it has worked pretty well here in our country.  This approach to economics is, in fact, woven into the national fabric.

Everyone gets free healthcare in Cuba.  But it’s a good thing there, because the average wage earner in that nation makes less than $30.00 per month, including the doctors.   And three out of four workers in that country – where a little more than 50 years ago economic development was the highest in Latin America and advanced even by European standards – now work for the public sector (read: the government tab).

But don’t hold your breath while waiting for Michael Moore to make a movie entitled, “Cuba: A Sad Story.”  His current movie, a rant about the evils of capitalism, will be released next week in theaters.  Of course, Moore wouldn’t make a movie, or do anything for that matter, out of self-interest.  Would he?

It’s no secret if you want a high standard of living in countries with planned economies (the collective version of fixed incomes) you go to work for the government.  As you climb the ladder you get better Dachas.  This was only true here in the U.S. during the days of the Great Depression and New Deal.

Of course, in fairness, the anti-capitalists are just getting started.

On the international front, lip service may be paid here and there to the concept of national self-interest, as when Mr. Obama told the good old boys and girls at the United Nations the other day: “Now, like all of you, my responsibility is to act in the interest of my nation and my people, and I will never apologize for defending those interests.”  However, one just knows that a big fat conjunction is coming signaling the real point: “But,” (see, I told you) “it is my deeply held belief that in the year 2009 – more than at any point in human history – the interests of nations and peoples are shared.”

The president’s hyperbolic assignation of this year notwithstanding, is it even remotely true that China or Russia share our interests? And even leaving the roguish states out of the discussion, is it at all realistic to ask any nation to act against, or in any way minimize, its own interest – no matter how compelling or romantic the call?  And is it even just a little bit ironic that in a speech with the line, “No one nation can or should try to dominate another nation,” our president calls everyone to follow the magnanimous lead of America, now that the Bush administration has been replaced with a collection of more responsible political gnostics?

President Obama does not have separate principles for his domestic and foreign policy approaches.  There is one common thread.  It’s out with the old and presumably outdated self-interest and in with a brand new era of quasi-utopian-top-down-we-know-best-because-we-are-enlightened peace and prosperity.

Let bells all over the world ring as empathy breaks out all over.

“The time has come to realize that the old habits, the old arguments, are irrelevant to the challenges faced by our people,” President Obama told the United Nations General Assembly on Thursday.  But as ambitious and idealistic – even resonant to some – as such a statement is, the fact is that our fundamental nature as human beings has not changed throughout the course of history.  Technology has changed, knowledge has increased, landscapes have morphed, and kingdoms and nations have come and gone, but as the Shakespeare of the prophets recorded six centuries before Christ: “

All flesh is grass, and the goodliness there of is as the flower of the field: the grass withereth, the flower fadeth…” Isaiah 40:6-7

This simple, resilient, and undeniable fact is that self-interest is here to stay as long as the world turns.  And any philosophy or vision, utopian or otherwise, that fails to take this fact into account, is doomed to failure.

In the waning days of Lyndon Johnson’s presidency, he would sometimes lie awake at night worrying about things; the war, his Great Society dreams, and even his own health (his father died relatively young, and Johnson feared the same fate).  Occasionally he’d wander the halls finding his way to a portrait of Woodrow Wilson, a man who had been at the pinnacle of power and influence, only to be eventually devastated emotionally and physically by events and the pressures of his office.

LBJ wondered if he’d wind up the same way.  After all, didn’t he just want something better for everyone - a higher standard of living and a world safe and at peace?  And, hadn’t he been described as a colossus and the most powerful president since FDR, just a few years earlier?

Mark Twain used to say that “history never repeats itself, but it rhymes.”  He was right.  The cycles of history are not exact, but one time can resemble another and often does.

And one of history’s most enduring lessons is that if anyone begins a visionary journey with dreams and even ideals that fail to take into account the simple fact that people, businesses, communities (organized or otherwise), nations, and groupings of nations all share a passion for themselves, it is like starting with the premise that 2+2=5.  This may only seem to be a small error, but when carried out exponentially it becomes a monstrosity.