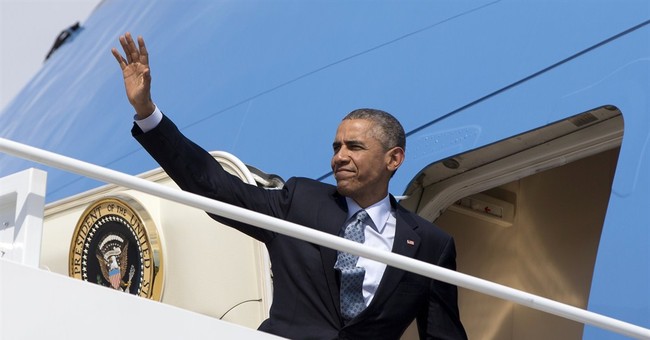 Earth Day is an annual observance designed to bring attention to mankind’s responsibility to care for the planet. That’s an honorable and important objective, however, most of the focus will be on condemning human use of fossil fuels and CO2 emission's contribution to global warming.

Environmentalists use Earth Day as another opportunity to disparage the most important source of human prosperity and enriched quality of life – fossil fuels. Ironically, President Obama, whose method of travel makes him one of the single largest individual contributors of CO2 emissions, is once again firing up the engines of Air Force One on Earth Day. This time it's a flight to the Florida Everglades for a photo op highlighting global warming’s impact on the planet.

Air Force One burns five gallons of fuel per mile. The flight to Florida will be around 1,000 miles and use 5,000 gallons of fuel. Air Force One will be just a portion of the President's Earth Day carbon footprint after adding in military support aircraft, C-17 transport planes for his fleet of limos and security vehicles, and the dozens of police escort vehicles used to move him around. It's a very carbon laden trip for someone whose objective is to convince the public that CO2 emissions are responsible for global warming and the destruction of the Everglades. This year's Earth Day trip pales in comparison to overseas trips in 2011 and 2014, where the President's travels used over 35,000 gallons of fuel and contributed 375 tons of carbon to the atmosphere.

These trips are the personification of hypocrisy, and typical of eco-hypocrites, who don’t change their personnel carbon emission behavior, while asking the rest of the world to do so. It’s the "do as I say, not as I do" principle. President Obama is not the only environmental crusader who is producing a massive carbon footprint while decrying the use of fossil fuels. Hollywood eco-hypocrite Leonardo DiCaprio likes to talk the talk but not walk the walk. It was recently revealed that the movie star, who led the People’s Climate March in New York, flew by private jet from Los Angeles to New York six times in six weeks last year. DiCaprio, and other wealthy environmentalists such as billionaire Richard Branson and Greenpeace’s Pascal Husting, want to save the planet by making it more difficult and expensive for the average person to enjoy mobility, while they jet set around the world in their private planes.

That’s the problem with their eco-ideology. The wealthy and privledged don’t have to suffer the consequences of environmental regulations that put average people out of work, and make it more difficult for the poor to maintain a basic quality of life that is dependent on the use of fossil fuels.

Earth Day should be a day we celebrate the amazing resources the earth provides that enable us to live a better life. We too often take for granted that just about everything we do involves some use of fossil fuels. Most of mankind depend on fossil fuels to heat our homes, to construct the roads we drive on, and to provide mobility and transportation. Fossil fuels have done more to improve our lives than just about anything else nature has provided. So on Earth Day, rather than condemn fossil fuels, lets celebrate the amazing lives we are fortunate to live - because of them.