David Limbaugh
|
Posted: Jul 26, 2016 12:01 AM
Share   Tweet
The opinions expressed by columnists are their own and do not necessarily represent the views of Townhall.com. 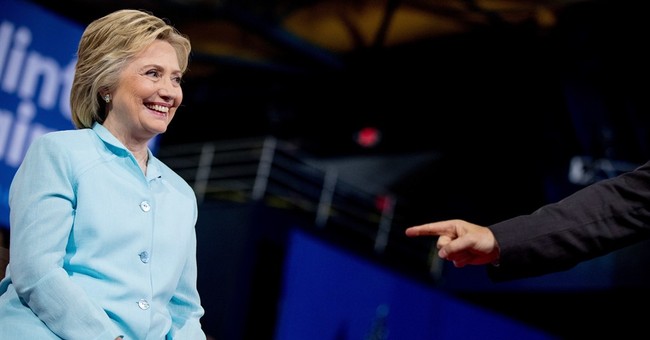 Trending
Some Republicans are disillusioned with their party's nominee, but imagine how rank-and-file Democrats must feel. Their presumptive nominee, Hillary Clinton, not only is exceedingly unappealing in her own right but also seeks to fulfill Barack Obama's third term and must defend -- even champion -- his disastrous record.

Apart from Clinton's own baggage -- her corruption, her empty record, her enabling of her husband's sexual exploits, her enormous unlikability -- she has sidled up to Obama so much during his tenure that she is stuck with his record, whether she likes it or not.

As President Obama's record reflects the worst presidential performance in modern memory -- and probably longer -- Clinton has her work cut out for her, but she will have a smorgasbord of excuses available.

Clinton must misrepresent Obama's record by sanitizing the miserable conditions Americans are currently experiencing and arguing that any failures, all of which she will deny, were caused by Republican opposition and obstruction during his term or Republican disasters preceding his term.

Don't laugh, but the meme that "it's Bush's fault" is still fresh on their lips. Every mainstream media report that grudgingly concedes the economy is struggling invariably cites the 2008 financial crisis Obama "inherited." Not only is it ridiculous to scapegoat Republicans for a recession that began 8 1/2 years ago but also it is outrageous that Obama and his media enablers airbrush the Democrats' principal culpability in engineering the policies that led to the financial crisis.

Clinton will also be running against a candidate whose negatives -- before the Republican National Convention, at least -- rival hers and who gives his critics ammunition on a daily basis.

But I suspect that as much material as the preceding strategies will provide, Clinton's bread-and-butter theme will be that same old Democratic song: Republicans are evil, uncompassionate, racist, sexist, xenophobic, homophobic, extremist bigots who want to subjugate women and minorities and exploit the downtrodden.

Think about it. When is the last time you heard a Democrat talking about freedom and prosperity? Democrats long ago discontinued any pretense to such aspirations. Now they just openly reveal their resignation to economic malaise in perpetuity and the necessity of using government even more extensively to redistribute wealth to achieve "economic justice."

To them, the economy is a zero-sum game and the "haves" have too much of that finite pie and must be forced to share their pieces with the "have-nots." They view as fantasies the concepts of robust economic growth and "a rising tide lifts all boats." And why not? The narrative that Republicans are greedy haters has secured 90 percent of the black vote for Democrats for ages, so why stop lying now?

Besides, being tied to Obama's record, Clinton will have no optimistic economic arrows in her quiver. She would look absurd trying to tell Americans that they could expect prosperity in her third Obama term. But at least she can assure them that she wouldn't let those dastardly Republicans have control over dishing out morsels of the ever-shrinking pie Obama's Democrats have over-baked into oblivion.

Unfortunately for Clinton, the economy, including Obama's egregious record on jobs, are only the beginning of her troubles. There are a host of other issues she's going to have to explain away or distort. Consider this small sample:

--The $19 trillion national debt. Granted, it has been alluded to so many times that it is approaching cliche status, but it still scares people with any sense of reality.

--Obamacare. No matter how Obama spins it, it has been an unmitigated disaster, failing all expectations as to cost and accessibility, and is steadily getting worse.

--Foreign policy. Obama and Clinton have had no coherent foreign policy except to cozy up to our enemies and insult our allies. They've intentionally orchestrated the decline of America's power and influence in the world.

--The polarized state of the American people, to which Obama has mightily contributed, especially on racial relations, which haven't been this bad since the 1960s. The tension between blacks and cops is alarmingly bad and increasing.

--The destructive swath of the Islamic State group and other Islamists -- abroad and at home -- is proliferating, and Obama and his party have no answer, other than to encourage us to believe their alternate reality that they have this under control.

--Democrats continue to advocate an open-borders policy, which exacerbates every other problem we are facing.

Note that I didn't list this administration's assaults on the rule of law, traditional values, religious liberty, the Second Amendment, work and the conventional energy industries, among others, because Democrats have succeeded in conning many people into believing that they are on the right side of these issues.

Hillary Clinton can harp all she wants to about the Republicans' "darkness," but her evidence of our darkness is that we are pointing out the darkness of the Democrats' policies and record. Pointing out darkness is not darkness. It is our patriotic duty to contrast that darkness with the luminous potential of a strong, prosperous and free America -- an America that Democrats have forsaken.