There Was the President's Speech, and There Is Reality 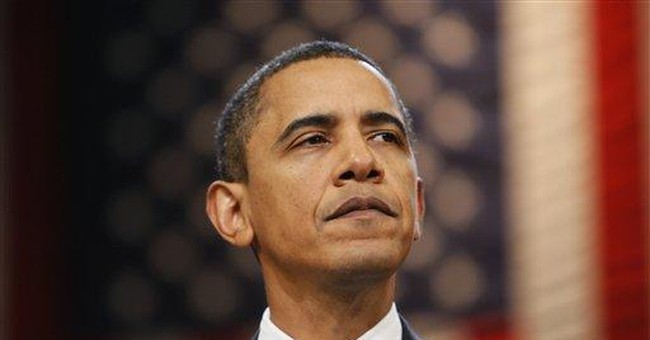 Watching President Barack Obama's State of the Union speech makes me wonder whether the reason he tells so many fibs is that he believes them himself. Either that or he is an even better actor than he is a teleprompter reader.

Obama not only wasn't contrite about his broken promises and disastrous record; he was on the attack, daring anyone to oppose his agenda -- even in the face of the Massachusetts rebuke. But let's see how some of his statements match up with reality.

On health care, he taunted congressmen to "let me know" if any of them have "a better approach that will bring down premiums, bring down the deficit, cover the uninsured, strengthen Medicare for seniors and stop insurance company abuses," as if his own plan would do those things.

Even the Congressional Budget Office has said most of the Democratic plans would increase the budget. Besides, you can't reduce overall costs when government forces an increase in demand, even if it caps insurance premiums and shifts costs elsewhere and/or imposes rationing. The CBO has also reported that with Obamacare, millions would remain uninsured. So under his plan, costs would rise, quality and choice would decrease, care would be rationed, millions would remain uninsured and, worst of all, the government would acquire an unprecedented level of control over all aspects of our lives.

A candid Obama would have said, "If any of you have a plan that does not involve restoring market forces and reducing government's role in the health care industry, I'll at least pretend to look at it." "Make no mistake," neither Obama nor his Democratic colleagues will support genuine health care reform, because to reduce costs, we must reduce government control, and they can't abide that. Period.

As for spending, Obama didn't once apologize for his reckless expenditures. Instead, he blamed his soaring deficits on his predecessor, completely misrepresenting the projected deficits under President Bush and ignoring his own deliberate doubling of the national debt over the next 10 years. That's the issue Americans are losing sleep over, and he offers only Band-Aids and smoke and mirrors.

He says he will freeze a portion of the discretionary budget, but as Cato Institute reports, 83 percent of the budget will be off-limits. Other than his "stimulus" insanity, the real explosion in spending is occurring in the entitlements that he refuses to touch. Even his mini-freeze wouldn't begin until 2011 (why wait?), and it would be dwarfed by his planned spending increases for other socialistic projects, including a new "stimulus plan." And how about that assault on personal and fiscal responsibility with his promise to forgive student loans after 20 years?

How Obama can stand before the nation and insist on spending more borrowed money to accomplish something his first "stimulus plan" didn't achieve (job creation), but exacerbated, is beyond me. How he can blame President Bush for his own broken promise that unemployment wouldn't exceed 8 percent if his "stimulus" bill were implemented is jaw-dropping. He even said he saved 2 million jobs. Scary delusional! Or scary sinister!

Speaking of chutzpah, did he actually dare to utter the words "transparent" and "accountable"? How about those phantom legislative districts receiving stimulus monies, Mr. President? How about that promise to televise the health care debates on C-SPAN?

He said he hadn't raised income taxes "a single dime" on 95 percent of the people. Yet in almost the same breath, he promised to redouble his efforts on cap and tax, which would increase the average family's energy costs by almost $3,000 per year. I don't believe his campaign promise was limited to income taxes, by the way.

How about his righteous ranting on earmark reform? Sorry, we've been down that twisted road with you before, Mr. President.

Then there was his audacious riff on lobbyists. Been there, done that, too, Mr. President, with your phony promise to keep lobbyists out of the White House.

Obama also railed against "partisanship, shouting and pettiness" as he filled most of his speech with just those things, even castigating the Supreme Court, erroneously, for opening the door to foreign corporations' campaign contributions.

How about his statement that "America must always stand on the side of freedom and human dignity"? Hmm. Tell that to the Iranian and Honduran peoples. He must have meant once he's out of office.

Then there was his bizarre out-of-body pivot, when he blamed Washington for our problems.

All of this, especially Obama's obvious incapacity for self-doubt, is disturbingly surreal.