The Public Option Is Not an Option 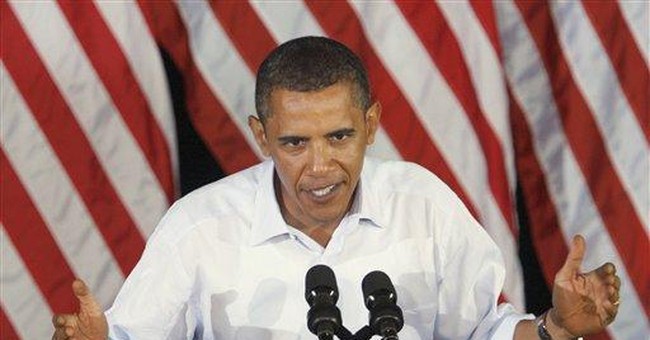 Can you imagine the brazenness of President Barack Obama and his cohorts in going so far as to ridicule opponents of Obamacare for rightly pointing out that its ultimate goal is single-payer socialized medicine?

These people are propaganda virtuosos of the highest order. You might expect grand artists of deception just to silently dismiss such claims from critics or, at most, to summarily deny them. But they go further and mock the critics, trying to reduce them to acutely paranoid, tinfoil-hat-wearing, black-helicopter-hallucinating Cuckoo's Nest inpatients.

What better way to distract attention from what is right in front of our faces? It's brilliant reverse jujitsu: using the outrageousness of your own plan to discredit as preposterous the allegations of your opponents about your truly outrageous plan. Shameless!

Obama and his minions are indeed conspiring to foist socialized medicine on this nation through whatever means necessary -- including outright deception over the nature and purpose of the so-called public option. But before presenting proof of that, let me pose a few questions bearing on the likelihood Obama would be involved in such a deception in pursuit of this goal.

Didn't Obama repeatedly threaten to "spread the wealth"? Isn't he deliberately indebting us through government expenditures of borrowed funds not remotely designed to appreciably increase employment? This "stimulus" monstrosity is a massive redistributive scheme not only in its direct transfer payments but also in the confiscatory tax increases it will necessitate to retire the debt it is generating.

Obama is hellbent on passing economically crippling cap-and-tax legislation on the dubious pretense that man-made global warming is leading to an apocalypse. The Heritage Foundation's Center for Data Analysis estimates that this legislation would make the United States some $9.4 trillion poorer by 2035 while moderating temperatures by only hundredths of a degree in 40 years. Obama's former colleague Sen. John Kerry, adding insult to injury, has the audacity to sell this plan as one that would enhance our national security -- security that depends on our economic viability.

Based on those two examples alone, the inescapable conclusion is Obama believes that America's resources have been unfairly allocated under its free enterprise system and that he must preside over an unprecedented correction of this "injustice" through institutional changes disguised as benign measures necessary to stop phantom demons.

But if you're not sufficiently convinced of Obama's Marxist bent to understand he is determined to implement socialized medicine as a means to establishing government control over all aspects of our lives, how about considering direct evidence of the administration's deception concerning the true purpose of the public option?

First, we have Obama's pre-presidential words (in a 2003 speech) on a single-payer system. "I happen to be a proponent of a single-payer universal health care program. ... We may not get there immediately."

Bloggers at Verum Serum have further exposed this "transparent deception" with a video montage of Obama and other leftists -- including politicians, professors and journalists -- speaking candidly about the relationship between a "public option" and a single-payer system.

The videos show Rep. Jan Schakowsky, D-Ill., telling her audience that an insurance company spokesman claimed that a public option would put the private insurance industry out of business and lead to a single-payer system. "My single-payer friends," said Schakowsky, "he was right. ... This is not a principled fight. This is a fight about strategy for getting there, and I believe we will." Professor Jacob Hacker smugly boasts: "Someone once said to me this is a Trojan horse for single-payer. Well, it's not a Trojan horse, right? It's just right there." Health and Human Services Secretary Kathleen Sebelius confesses: "I'm all for a single-payer system, eventually. ... What we have to do, though, is work with what we've got to close the gap." Rep. Barney Frank says a public option "is the best way to reach single-payer." New York Times columnist Paul Krugman believes that a public option would, "in the end, kill the private plan." Presidential adviser Rahm Emanuel, in explaining Obama's apparent flip-flop on the public option, said, "The objective is what's important; it's not the means."

Apart from Obama's statist ideology and the evidence of his true aims, our common sense tells us that a "public option" backed by a government-stacked deck against private insurance companies -- which Obama hasn't demonized for nothing -- will eventually bury private health insurance companies.