This Isn't About Rush 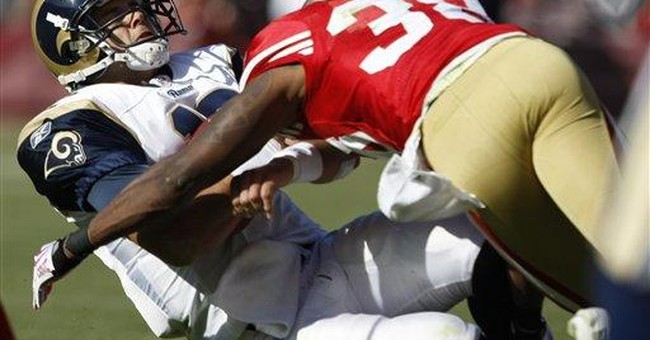 There will be no voluntary mea culpas from Rush's race slanderers despite the irrefutable fact that they spread poisonous and damaging lies with actual malice. To the left, Rush is the most prominent face of conservatism and the most influential opponent of President Barack Obama's destructive agenda and so must be stopped -- irrespective of the despicable means employed.

The left systematically destroyed President George W. Bush with the most egregious lies, repeated to the point that people who knew better even began to believe them. The formerly respected CBS News anchor Dan Rather was so convinced by his liberal bias that Bush was evil that he refused to apologize for slandering him with a story later proved to be manufactured -- and that's giving Rather the benefit of the doubt that he was unaware the story was fabricated from the get-go. To Rather, it didn't matter because he was convinced Bush possessed the character of someone who would have engaged in the acts of which he was falsely accused.

And what was it about Bush that led Rather to the conclusion that he possessed such low character? In Rather's eyes -- though many conservatives would strongly dispute this -- he was a conservative and conservatives are evil.

The parallel with Rush's leftist slanderers is striking. It's one of the first things that occurred to me as I heard their sniveling responses, one by one refusing to utter a syllable of apology and instead using the occasion of being caught red-handed in malicious lies as a further opportunity to reiterate their libel.

"How dare you suggest that we have done anything wrong in attributing statements to Rush he never uttered? Even if he didn't say those words, you know he was thinking them or something much worse."

There isn't an ounce of fairness in these deliberate bearers of false witness or their supporters. If the supporters were just slightly honorable, at the very least they would condemn the slanderers for their indefensible tortuous utterances. They wouldn't even have to say one word in defense of the super patriot they loathe; just call to the carpet the brutish verbal thuggery of their ideological soul mates.

Many outraged Rush fans are directing their ire at Al Sharpton and Jesse Jackson, but I would argue that this is an inefficient allocation of their righteous indignation.

These two household name-level, race-hustling opportunists have no credibility, including with the mainstream media and other liberal prostitutes who continue to aid and abet their shenanigans, such as this one. It's a pact of mutual convenience. The liberals know full well that few on the right have the moral courage to oppose their mischief for fear of being labeled racists themselves. So they shamelessly prop them up to enable them to agitate racial disharmony and deliver race-oriented votes to the Democratic Party.

So please direct your angst not at these direct agents of racial toxicity, but at their leftist enablers in the media, the Democratic Party and the government -- those who not only empower these hate-spewing mouthpieces but also participate in the poison by issuing such destructive lies as "a vote for a Republican is a vote for another church to burn" and "President Bush left poor blacks on the rooftops in New Orleans in the aftermath of Hurricane Katrina because Republicans don't care about blacks."

While you're at it, please reserve just a smidgeon of your outrage or disgust for those lukewarm conservatives who contribute to the destruction of race relations and to the advancement of liberal causes by pandering to false characterizations of authentic conservatives, such as Rush, who aren't afraid to stand up for the truth, even when it will subject them to virulently fraudulent charges of racism or other slanders.

If any of you are sufficiently naive to believe this NFL incident is merely about Rush, you have a rude awakening in store. The left is on the march -- the march to isolate, stigmatize, demonize, discredit and ultimately silence those who stand in their way. If you haven't read up on the plans of Obama's Federal Communications Commission czar to shut down talk radio or if you aren't following the tyrannical workings of the administration in trying to cram down unpopular legislation without a shred of transparency, then you'll eventually witness the lengths to which these people will go -- as illustrated here.

At the risk of sounding trite, we are at a crossroads in this country, and the left is proving each day how ruthlessly unprincipled it will be in advancing its goal of fundamentally changing this nation.

I pray and honestly trust that conservatives will be emboldened, not cowered, by this nasty, sordid turn of events.