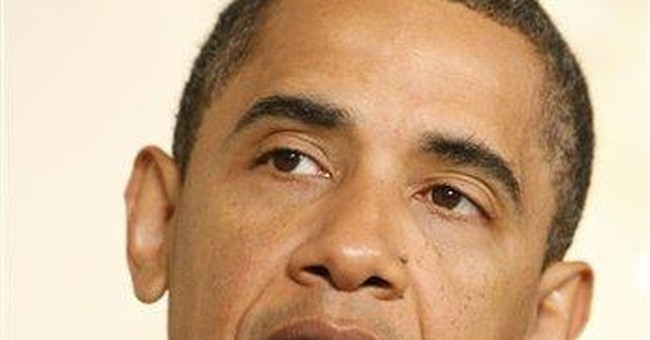 American freedom lovers studying the reign of Obama have been in a constant state of anxiety over the administration's assault on capitalism and America's very solvency, its thuggish political style, its PR war against America's history, its radical social policies and its Carteresque foreign policy. But for the first time, there are signs that America is starting to wake up.

The latest daily Rasmussen Reports Presidential Tracking Poll has Obama slipping into negative net approval territory, with more Americans strongly disapproving of his performance (34 percent) than strongly approving (33 percent). Just 54 percent of voters say they at least somewhat approve. Even the Gallup Poll reports a decline in his approval rating to a new low, albeit still at 58 percent. The decline results from a drop in support among independents, as well as Republicans -- but not Democrats.

Can you imagine what these numbers would be if the mainstream media weren't invested in Obama's success or, better yet, if moderate Democrats weren't still blinded by their lingering excitement over regaining the presidency and their vulnerability to Obama's cultish aura?

But it's not just the polling data that are encouraging. Obama's blame-it-on-Bush mantra is starting to wear thin. Another Rasmussen survey found that 39 percent of voters now think our economic problems are caused more by Obama's policies -- a 12-point jump from just a month ago.

Also, support for Obama's most dangerous agenda item, nationalized health care, is waning. A recent ABC News//Kaiser Family Foundation/USA Today survey indicates that 89 percent of Americans are satisfied with their health care. Worse (for Obama), congressional Democrats have warned that his plan is in jeopardy because its projected costs range between $1 trillion and $1.6 trillion, according to Congressional Budget Office scoring, and it would not even reduce by half the number of uninsured (the fraudulent impetus behind the administration's manufactured crisis). Just wait until further damaging truths come to light about the horrors awaiting America's health care system if it is nationalized, including government rationing and dramatically lower-quality care.

The White House is showing signs of stress. We see increasing defensiveness from White House press secretary Robert Gibbs, whose daily dips into incoherence are no longer even newsworthy. Asked to respond to long-delayed criticism from President Bush over Obama's national security and domestic policies, Gibbs trotted out, yet again, the administration's mindless retort, "We kept score last November, and we won."

But Gibbs outdid himself when he was unable to name a solitary nation that has benefited from a single-payer health care system. While Obama steadfastly maintains he is not angling for a public monopoly, everyone knows that is the inevitable result -- and intent -- of his plan.

Obama received another setback last week, when Congress repudiated his feckless policy on the Iranian crisis with a resounding 405-1 vote in favor of a resolution of solidarity with the Iranian protestors. Even the Democrats didn't have the guts to go on record endorsing Obama's positions of moral equivalence and opportunistic passivity.

I can't help but believe that Obama will be his own worst enemy in his efforts to reverse the trend in his popularity as the disconnect between support for his policy agenda and his personal popularity continues to erode. Every indication is that he is a stubborn ideologue ill-suited to make policy adjustments when reality continues to gobsmack his purblind vision.

While Obama resembles Jimmy Carter in some respects, he is starkly different in his aversion to attend to details, preferring to bask in his broader vision and assume -- narcissistically -- that his force of will alone will bring about the results he seeks.

Consider: He has refused to backtrack on his commitment to close Gitmo, despite overwhelming public disapproval of the policy and no plans for prisoner relocation. He clings to the fantasy that effeminate overtures to the world's thuggish dictators will entice them to behave. He is philosophically impervious to the 100 percent failure rate of socialized medicine in world history and to the mounting research and expert opinion contradicting his intractable position on man-made global warming. His so-called stimulus money -- the limited percentage of it that was front-ended -- is being allocated disproportionately at the state level to relatively unproductive rural projects at the behest of some local politicians, who have more incentive to bring home the bacon than conform to Obama's directives toward shovel-ready projects.

As more time passes and Obama's ability to scapegoat his predecessor declines further, along with his apparent charisma, more Americans will see just how different Obama's worldview is from theirs -- and they'll begin to see more clearly the woeful ineffectiveness and destructiveness of his policies.

Wishful thinking perhaps -- but that's better than I had a few weeks ago.