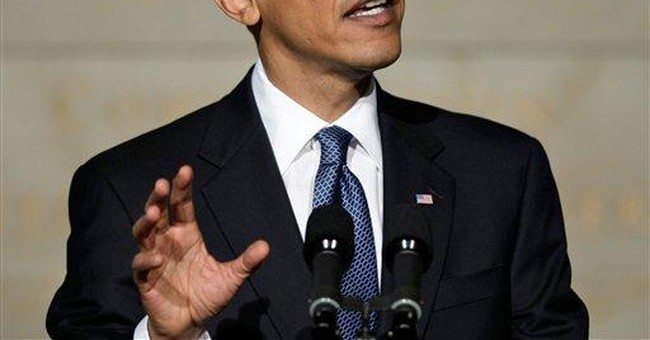 Democrats are outraged that former Vice President Dick Cheney is publicly defending the Bush administration's policies regarding the war on terror. How dare he defend the Bush record in the face of the partisan slander that began during Bush's first term and continues to this day unabated? Why, he's demeaning the office he serves.

It must have slipped their minds that radical environmentalism's high priest, former Democratic Vice President Al Gore, has gallivanted the world over, maliciously excoriating the Bush administration. Correct me if I'm wrong, but I don't believe there was ever the slightest complaint from the Democratic decorum police.

Does this ring a bell? "He betrayed this country! He played on our fears. He took America on an ill-conceived foreign adventure dangerous to our troops, an adventure preordained and planned before 9/11 ever took place."

How convenient, also, for Democrats to overlook that Cheney didn't start any of this. He isn't going about the country leveling unprovoked attacks against the administration. He is responding to Democratic attacks and thuggish threats to criminalize Bush administration policies.

But it's not Gore's attacks to which Cheney is responding. He's reacting to the far more current but equally vicious (though subtler) attacks against the Bush administration by President Barack Obama himself.

Never has a sitting president been as obsessed with scapegoating the policies of the preceding administration as Barack Obama. We are four months into his administration, folks, and he is still sneering at -- and blaming -- Bush and Cheney for our economic woes and national security policies.

In his much-ballyhooed national security apologia Thursday, which ended up serving as rebuttal fodder for Mr. Cheney's stemwinder at the American Enterprise Institute, Obama lashed out at the previous administration, because he doesn't dare blame congressional Democrats for refusing to fund his reckless scheme to close Gitmo without any plan to house the detainees.

"We're cleaning up something that is, quite simply, a mess -- a misguided experiment that has left in its wake a flood of legal challenges that my administration is forced to deal with on a constant, almost daily, basis, and that consumes the time of government officials whose time should be spent on better protecting our country."

I can't imagine President Bush spewing such nastiness at his predecessor or at any of the other Democrats who ceaseless bashed him -- precisely because he didn't.

But Democrats, evincing their virtuosity at the fine arts of psychological projection and hypocrisy, reserved their outrage for Cheney, not Obama, ignoring that Obama and his party are always the ones drawing first blood.

Democratic strategist Bob Shrum says the charge that Democrats are playing politics with national security is "a smear." Democratic strategist Bob Beckel said: "I've never heard a more slanderous, disgraceful performance by a former vice president or president than I just listened to. The idea that Dick Cheney would suggest that the Obama administration was putting, for political purposes, at risk the security of the United States of America and lives of American people is outrageous."

No, Bob(s), what's outrageous is that the charges ring true. Why else, besides politics, would Obama and other Democrats have lambasted and discredited the Bush administration for years over its WOT policies and then adopt many of those very same policies, from extraordinary rendition to the NSA warrantless surveillance program to recognizing that the laws of war permit the U.S. to capture enemy combatants and detain them without trial until the conclusion of hostilities to the use of cosmetically modified military commissions, which Obama had earlier called a "legal black hole"?

If rank partisanship hasn't been at play here, how does one reconcile the Democrats' demagoguery against Bush to close Gitmo come hell or high water with congressional Democrats' present refusal to fund Gitmo's closure until Obama presents a plan concerning placement of the prisoners?

Apart from recognizing it as a partisan witch hunt, how do you explain why the Obama-Holder Justice Department condemned enhanced interrogation techniques as torture, to the point that it considered prosecuting Bush officials and its Justice Department lawyers for authorizing and recommending them, yet endorsed the Bush position on torture just weeks ago, in Demjanjuk v. Holder? How do you explain the approval of these very techniques by the Democratic leadership, including House Speaker Nancy Pelosi, when briefed by the CIA and the Bush administration?

And the money question: If, indeed, Barack Obama is so convinced that enhanced interrogation methods violate our values and the rule of law, how do you rationally explain his reservation of the authority to reinstitute the practice?

Democratic strategists are free to dramatize their manufactured indignation over the charge of subordinating our national security for political gain, but their chickens are coming home to roost. Their inconsistent, untenable, reckless positions have been exposed, and they've tied themselves in knots.

How else do you explain Obama's unhinged national security speech Thursday?