Palin's a Tough, Smart Conservative Woman: Deal With It! 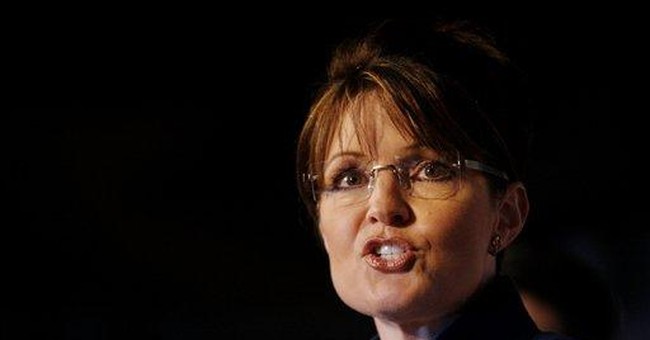 Liberals excel in blinding themselves to their own biases and hypocrisy and blaming conservatives for their own sins, all of which they are showcasing in their frantic reaction to the Sarah Palin nomination.

Not only are they trying to destroy Palin. They are straight-facedly denying it and accusing Republicans of manufacturing this charge to exhibit phony sympathy for women.

Conservatives, after all, couldn't possibly be supportive of female Palin based on merit; it's just a political ploy to purloin Hillary voters. Liberal captives of identity politics just can't comprehend that neither gender nor race matters to conservatives. It's all about the candidate's political philosophy, approach to governance and qualifications to serve -- not those artificial constructs that liberals have exploited through the years.

Don't get me wrong. Palin's beauty and tough-as-nails femininity are refreshing icing on a delicious cake for conservatives, but if she were not demonstrably conservative, they'd be depressed -- not energized.

But you'll never convince the liberal press, which sees everything through the lens of gender and race consciousness and indiscriminately projects that propensity onto conservatives.

Thus, Newsweek's Anna Quindlen is reduced to grousing about the "hypocrisy" of conservatives in honoring the Palins for bringing a baby with Down syndrome to term rather than scolding them with "pursed-lip accusations of promiscuity."

Conservatives, said Quindlen, have "inveighed against affirmative action" yet celebrate the affirmative action that "undoubtedly played a part in" the Palin selection. And how can conservatives credibly complain about personal attacks against Palin, when "the wingnuts of their own party elevated such attacks to a fine art by accusing Hillary Rodham Clinton of fictitious misdeeds from treason to murder"?

Like many liberals, poor Anna can't seem to distinguish between hating the sin and hating the sinner. Nor does she grasp the difference between government-mandated race- or gender-based preferences and the private selection of individuals for public service who happen to be in "minority" categories. She is also confused on the distinction between dozens of legitimate charges against the Clintons and the trumped-up slanders against Sarah Palin. When you've caught Bill Clinton red-handed in multiple felonies and Hillary in gross improprieties on which she got a complete media pass -- such as the cattle futures and missing law firm billing records -- who needs the more sensational allegations of treason and murder?

But despite her best efforts, Quindlen's obtuseness doesn't hold a candle to that of MSNBC's Chris Matthews. On "Hardball," Matthews derisively mocked Pat Buchanan for defending Palin against media attacks, accusing him of "a 1950s version of chivalry," false "sensitivity," "political cross-dressing" and assuming the role of Dr. Phil.

Revealing the narrowly calibrated liberal mind, Matthews wrongly assumes that conservatives are cynically playing the gender card in defending Palin and, in the process, demeaning women and hurting their cause. "This courtesy that you expect people to show her is debasing her potential as a leader of this country."

Nice try, Chris. But conservatives are defending Palin not out of chivalry, but against false charges. Our invocation of gender is solely to point out liberal hypocrisy for engaging in the sexism they pretend to decry. For example, consider their condemnation of Palin as an unfit mother for working a demanding job while having young children at home.

Matthews, saying Palin is ducking press scrutiny, started a bogus altercation with Buchanan over the public's "right" to have candidates submit to "tough questions" from an "objective" journalist.

Matthews needs shock treatments if he thinks the liberal media are objective. Would someone buy him a mirror -- or tapes of his own program? Even his own bosses dumped him as convention anchor because of his overt bias. Indeed, a Rasmussen poll indicates that 51 percent believe the press is trying to hurt Palin.

Buchanan was simply saying the candidates can make their own decisions concerning media access and pointing out that voters will be free to draw their own conclusions from those decisions.

Liberals are accusing Palin of avoiding the media to create the impression she has a reason to hide from them. She was just nominated, for crying out loud. Take a breath. She has already agreed to an interview with ABC's Charlie Gibson, and there will be plenty more.

But while we're on this subject, have the media talked about Obama's incompetence without a teleprompter or his flip-flop on agreeing to unscripted town hall meetings with McCain? Have "objective" journalists asked Joe Biden about his plagiarism or his autocratic plan to divide Iraq into three separate nations whether Iraqis like it or not? Did they ever demand to see John Kerry's medical records?

The more liberals mistreat Palin and act like transparent 2-year-olds in projecting onto conservatives their own patronizing proclivities the more their true colors will be apparent. So please keep it up.