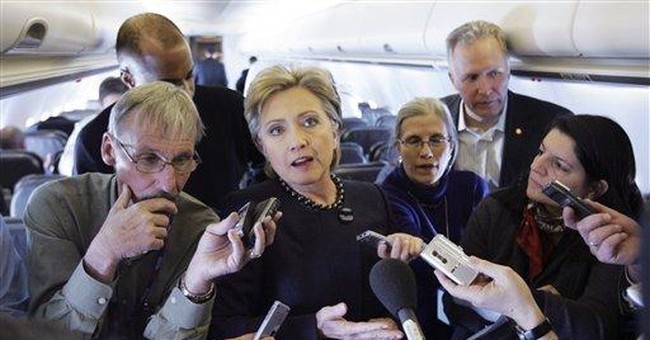 Memo to former mainstream-media darling John McCain: I hope you are paying close attention to the MSM's palpable favoritism toward Barack Obama because we haven't seen anything yet. You think The New York Times was an exception? Just wait. I urge you to review the tape of the Ohio Democratic debate from Tuesday night.

In one sequence after another, Brian Williams and Tim Russert took proactive roles in the debate, playing "gotcha" mostly against Hillary Clinton instead of facilitating a debate between the candidates.

Yes, but when the moderators team up against one of the two candidates, the dynamics change. It's hard not to be defensive when everyone in the room who's talking is against you. That's difficult to overcome psychologically.

It reminds me of certain jury trials I've witnessed where the trial judge was noticeably prejudiced against one side and projected his feelings -- in body language, words and attitude -- to the jury. The less-favored litigant had little chance. And it was outrageously improper.

Even if you think it's acceptable for the moderators to abandon neutrality, surely you don't think it's OK for them to start debating the candidates themselves. Are they running for something? The Smartest Guys in the Room Award, perhaps?

To be fair, Hillary brought some of this on herself by showcasing her most annoying side during the initial laborious exchange on health care, when she just wouldn't yield the floor. "I have to respond to that because this is not just any issue. Brian, wait a minute. I've got -- this is too important."

If Williams' and Russert's taking sides after that was just payback for Hillary's refusal to play by the rules, it would be one thing. But they had most of their questions planned in advance.

For example, Russert, with his tough-interviewer's hat on instead of his moderator beanie, pressed Hillary about her "economic blueprint in Wisconsin," where she pledged to create five million jobs over 10 years. He essentially asked her if she was blowing smoke considering that she had breached her 2000 campaign promise to create 200,000 jobs for upstate New York, where there was a net loss of 30,000 jobs.

Isn't that something Obama should be bringing out rather than Russert? It seemed to me this kind of thing went on all night, with far more of it being directed at Hillary than Barack.

Obama outclassed Clinton in form and presentation by a country mile. And while Hillary mostly did well on substance, where she utterly blew it was when Brian Williams invited her reaction to a video clip of her lampooning Obama's unity theme. In the clip, she says, "The sky will open, the light will come down, celestial choirs will be singing, and everyone will know we should do the right thing and the world will be perfect."

(When I heard Hillary sat that, I fantasized for a moment that she might be channeling me since I had advised her in a previous column to challenge Obama on his ludicrous promises to bring unity while implementing the most liberal agenda in recent memory.)

To me, this is the one place Obama is vulnerable to a Hillary attack: his lack of realism, bordering on outright deception. She certainly has no credibility to attack his robust liberalism.

But instead of going after him on this, Hillary shrunk away from it as if she had been caught on tape in a dirty trick. Hillary said, "Well, I was having a little fun. You know, it's hard to find time to have fun on the campaign trail, but occasionally you can sneak that in."

Bull. She wasn't trying to have fun. She was showcasing the absurdity of Obama's feigned messiahship and hitting him in the jugular. But under pressure and outside the comfort zone of her own campaign rally, she didn't have the courage to follow through and call him on his utopian nonsense.

I'm not sure it would have done any good, but the cards were stacked against her anyway, so what did she have to lose?

This is all ominous for John McCain because there is a common contributing factor in his and Hillary's previous electoral successes: They were both greatly aided by favorable MSM treatment. But that was then.

The unspoken message from the MSM to Hillary and McCain, to borrow from Bill Cosby, is: "We brought you into this world, and we can take you out."