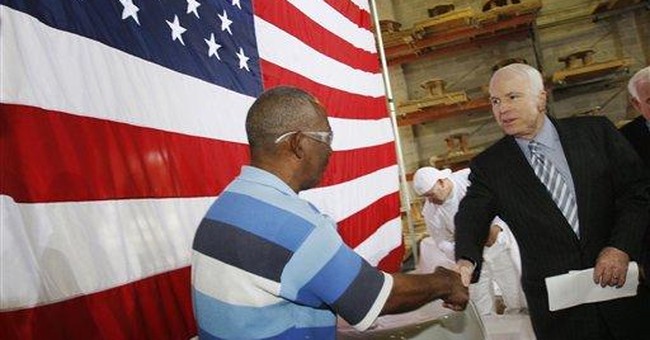 Many conservatives have said Sen. John McCain is not conservative enough to suit them. Some of McCain's defenders have not only disagreed but have impugned his critics, hypocritically blaming them for divisiveness.

But intramural bickering isn't the issue. What's important is that conservatives have an intellectually honest and open discussion about GOP presidential contenders.

It's disappointing to watch good conservatives demean themselves by trying to present McCain as something he's not. No matter how much they spin, they can't fool conservatives familiar with McCain's record. McCain's detractors are not the ones having to stretch and massage the facts in order to turn McCain -- overnight -- into a Reagan conservative.

McCain is not only not conservative enough; he has also has built a reputation as a maverick by stabbing his party in the back -- not in furtherance of conservative principles but by betraying them. McCain delights in sticking it to his colleagues while winning accolades from the mainstream liberal media.

Former senator Rick Santorum, whose conservative credentials are beyond question, said, "I don't agree with (McCain) on hardly any issues." Santorum told radio host Mark Levin, "I just have to tell you, as a leader, as someone who had to put these coalitions together, it was always hard and we very rarely on domestic policy had any help from the senator from Arizona." Santorum said McCain has been damaging to conservative causes and would be no friend to conservatives in the White House.

McCain's defenders -- in the McCainian spirit of chilling political speech -- forbid us from criticizing him because he is a war hero. That's irresponsible nonsense. Voters and analysts have an obligation to assess McCain's suitability for the presidency. To consider and verbalize the negatives is not to demean his service or sacrifice.

We can recognize and honor McCain's indescribably grueling POW experiences without taking the leap of arguing they automatically qualify him as an ideal commander in chief. His qualifications should be evaluated on the merits, not on sentimental appeals to his service.

Understandably, I suppose, pundits often glibly assert that one of McCain's many advantages is his character -- a character that was molded by the hardships he endured. McCain's captivity undeniably involved more character building than anything most of us will ever experience. But to say he is a rugged, battle-tested hero does not mean he is incapable of prevarication, opportunism, demagoguery or other mischief. Nor does it immunize him from scrutiny concerning the credible claim that he lacks the temperament to be president.

I respectfully reject that McCain's honorable and sacrificial character-building experiences or his self-description as a "straight talker" place his veracity above question. I remember him sidling up to the media by falsely claiming George Bush didn't level with the American people about how long the Iraq war could take. I remember him blaming dirty campaign tricks on Bush in South Carolina in 2000, when investigations revealed there was no evidence Bush was behind it. I remember him joining liberals in slandering the truth-telling Swift Boat veterans as "dishonest and dishonorable." I remember his disingenuous derision of the across-the-board Bush tax cuts as being only for the rich. I witnessed him changing his position on immigration to shore up support in South Carolina, then after that primary arrogantly denying to Sean Hannity that he'd flip-flopped. People can assess for themselves whether McCain is always straight, but hopefully they'll base their decision on the evidence and not his hero status.

I seriously doubt McCain will win the GOP nomination, precisely because of his infidelity to conservative principles. Consider:

He crusades against Guantanamo, favors constitutional rights for terrorists but opposes tough interrogation techniques, was the ringleader of the Gang of 14, which legitimized the filibustering of judicial nominees, and is the godfather of political speech-suppressing and Democrat-favoring campaign-finance reform legislation.

He has displayed contempt for conservative evangelicals, opposed Bush's pro-growth tax cuts for reasons other than he says (spending), has engaged in other class-warfare rhetoric like demonizing oil and drug companies, co-sponsored the abominable McCain-Kennedy illegal immigrant-forgiveness/open-borders/Social Security zapping bill, and even voted for the Specter amendment, which could have conferred consulting rights on Mexico concerning the erection of a southern border fence.

He sold out on global warming, opportunistically opposed drilling in ANWR, favors re-importation of drugs from Canada, and promoted the McCain-Kennedy-Edwards patients bill of rights. Even his pro-life credentials are not as pristine as we're told: He opposes reversal of Roe vs. Wade and sided with anti-political speech zealots in filing an amicus brief against Wisconsin Right to Life.

Vote for McCain if you wish, but please don't insult conservatives by suggesting he's one of us.

That Loudmouth Troublemaker Is An FBI Snitch
Townhall
AOC-endorsed Maya Wiley is doing her best to insult every Jewish voter in NYC ahead of Tuesday's primary election
Twitchy
Bill Maher Torches California for Its Heavy Regulation
Redstate
Is Pennsylvania on the Verge of a Forensic Election Audit?
PJ Media