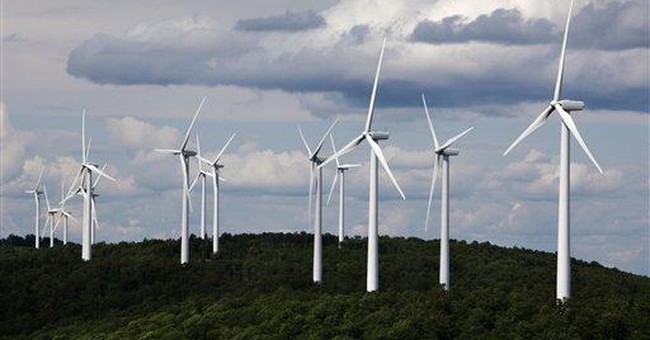 “We only have 2 percent of the oil reserves in the world, and we consume 25 percent of the world's oil on a daily basis. That is non-sustainable.” – Rep. Ed Markey (D-Mass.) on “Meet the Press,” June 20

To President Obama, this would seem to signal our “addiction” to wind. To Markey, this must seem “non-sustainable.”

The fact is, such calculations are useless. For instance, suppose we used one barrel of petroleum per year. At this rate our 2 percent of the world’s reserves, 50 billion barrels, would, in theory, last five times longer than the sun.

Now also suppose the rest of the world stopped using petroleum altogether. Markey could then say, “We only have 2 percent of the oil reserves in the world, and we consume 100 percent of the world's oil on a daily basis. That is non-sustainable.” Well, it’s only unsustainable 50,000,000,001 years down the road. Until then, there would be no problem.

Below are some projections from the Obama administration’s own Department of Energy.

In spite of Markey’s and Obama’s claim that comparative ratios being unequal will lead to unsustainable output, our production of oil is projected to rise one million barrels per day over the next 25 years. Consumption trails these increases slightly, so our net imports of petroleum would drop 5 percent as well.

Some might ask, since oil is a finite resource, might we not be close to total exhaustion of our reserves in 2035 and thus on the precipice of economic collapse? Oil is finite in a literal, but narrow, sense. As technology for finding and extracting petroleum improves, and as the price of petroleum rises, the economic viability of reserves increase.

The Department of Energy’s projections show that although we’ll pump tens of billions of barrels of petroleum from our reserves between now and 2035, the measure of reserves actually grows five billion barrels. Surprising as this may be to those unfamiliar with energy statistics, it follows a long-term historical pattern of reserve growth matching reserve use.

That is, our (the U.S. and the world’s) current fossil-fuel production is not only sustainable, it is likely to increase for decades. Our fraction of world’s consumption of oil tells us no more about the sustainability of our petroleum use than does our fraction of the world’s consumption of wind power tell us anything about the sustainability of our wind-power use.

Misleading statistics are often bandied about to frighten people. But the future of our energy supply isn’t scary. And this not-so-scary future doesn’t require cap-and-trade energy taxes, hundreds of billions of dollars of new subsidies to uneconomic energy sources, or radical policies to bring about a “new” energy economy.