David Harsanyi
|
Posted: Jun 26, 2020 10:01 AM
Share   Tweet
The opinions expressed by columnists are their own and do not necessarily represent the views of Townhall.com. 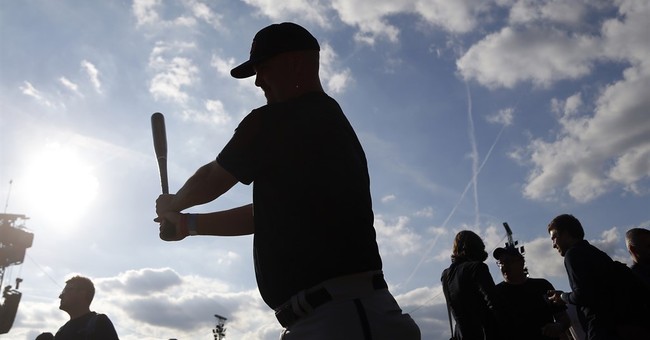 Major League Baseball is moving toward a 60-game 2020 season. For the first time in history, the designated hitter rule will be implemented in both the American and the National Leagues.

This is fantastic news for anyone who loves baseball and America, and not simply because the nation will be treated to more home runs but because we will no longer witness professional athletes clumsily swiping at balls or sticking out their bats and praying to make contact.

It's not just about offense. Yes, historically the American League scores more runs per game than the National League. In fact, it has every season since 1973, when the DH was first implemented. The differential, however, has been shrinking. The top four offensive teams in the game resided in AL in 2019, but overall there was less than a 0.20 run advantage per-game on average.

This trend is partly due to NL pitchers batting less. As roles have become more specialized, relief pitchers rarely pick up a bat anymore. In 2019, the number of plate appearances by pitchers per game in the NL was the lowest since at least 1973.

The sacrifice bunt, a rare and great triumph for any pitcher, has basically been stripped from the game because anyone hitting over .220 has a higher probability of moving a runner or reaching base if he takes a swing. Right now, pitchers are hitting around 160 points under the average position player. Most of the best-hitting pitchers in the game -- basically, anyone not named Shohei Ohtani -- are simply terrible. And they're getting worse every year. Their presence in the batter's box unnecessarily slows the momentum of games.

There is no other major sport where an athlete is asked to perform a task so completely out of his comfort zone. There's a reason that NHL goalies don't participate in shootouts and 350-pound NFL linemen do not line up as wide receivers.

It's fair to argue, as many purists do, that baseball isn't just a contest of home runs and big swings but of pitching, fielding, running, etc., and that more offense doesn't necessarily translate into more-compelling baseball. No doubt. There's a difference, however, between a low-scoring contest that is dictated by superior pitching and one that is dictated by the inept rally-killing hitters who aspire to reach the Mendoza line. The DH generates excitement and tension and pits the world's best hitters against the world's best pitchers.

There are other popular arguments against the DH, some stronger than others. National League fans, for instance, seem to believe that the DH will blunt the finer complex strategic aspects of the game. Listen, you can pretend that managers are tackling quantum physics every time they pull a double switch, but it's really not that complicated or interesting.

Change is not inevitable; it is a choice. Rushing haphazardly to implement a fundamental change to the game is not optimal. Nor do I dismiss the importance of continuity in baseball, which, perhaps more than any other sport, is invested in its past -- statistically, aesthetically and otherwise. Given what the world looks like these days, it's even more important to preserve traditions.

In the end, though, baseball is still a game. We have no sacred obligation to avoid changes that can improve it. There's little evidence that the designated hitter damages its authenticity. The designated hitter is 46 years old. It's already created a string of exciting moments for fans and extended the careers of a number of great players. The DH itself has evolved, from a spot typically reserved for aging or rotund sluggers to one that is utilized by managers to create more-balanced lineups.

Moreover, can anyone seriously argue that the New York Yankees or the Boston Red Sox or Cleveland Indians or Detroit Tigers have less claim to the rituals and traditions of baseball than do the Arizona Diamondbacks or the Colorado Rockies, neither of which even existed when the DH was first implemented? The designated hitter has been around longer than the wild-card format. It is only four years older than the lowered mound.

That day is not today.