David Harsanyi
|
Posted: Oct 04, 2019 12:01 AM
Share   Tweet
The opinions expressed by columnists are their own and do not necessarily represent the views of Townhall.com. 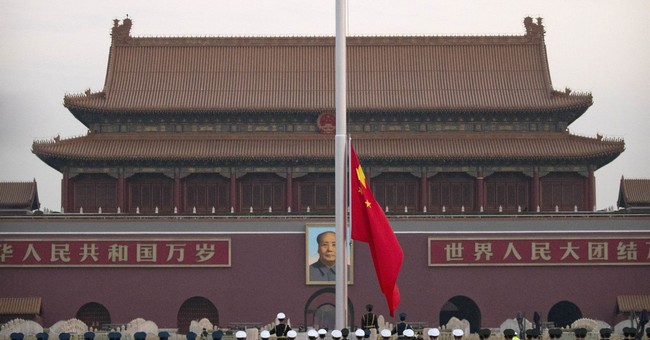 It's one thing to engage in diplomacy. It's another to praise evil.

This week, Donald Trump tweeted, "Congratulations to President Xi and the Chinese people on the 70th Anniversary of the People's Republic of China!" For diplomatic reasons, it's become customary for American presidents to praise and commend this depraved totalitarian regime. In a just world, the president would be sending his sympathies to the Chinese people, who have endured inconceivable sufferings under the communist regime since 1949.

As Helen Raleigh, whose family experienced Maoist-driven deprivations, aptly noted, the 70th anniversary of the People's Republic of China marks one of the darkest days in Chinese history. It's also one of the darkest days in mankind's history. Of all the planned utopian economies of the 20th century, none was more deadly or dehumanizing. No government has murdered, tortured, imprisoned and terrorized more of its own people than communist China.

The most infamous disaster of those 70 years began with 1959's Great Leap Forward, a manmade starvation that Mao called "grassroots socialism" -- one of a number that Marxism inflicted on the world -- which was responsible for the death of 40 million or more Chinese. "It is better to let half of the people die so that the other half can eat their fill," Mao rationalized.

But it wasn't merely famine. Millions of innocent people were tortured to death or summarily executed on the spot for arbitrary crimes against the state.

Many of those lucky enough to survive this hell would soon be thrust into the Cultural Revolution, where gangs of Red Guards, many of them mere teens, roamed the streets targeting anyone they deemed enemies of Maoism. No one was spared as these grassroots murderers rooted out ideological crimes (often over trivial grievances) and the authorities sat and watched. Millions more would be compelled to participate in struggle sessions to come to terms with their counterrevolutionary thinking. Thousands more would commit suicide to avoid all of it.

"All of it" included the largest penal system ever known to man. The communists would operate at least 1,000 large-scale concentration camps and forced labor camps over the 70-year span. For decades, an average of about 10 million Chinese were imprisoned every year in this gulag -- a majority of them for political crimes. Slave labor and torture ensured an estimated 5% mortality rate, which means more than 20 million Chinese perished in camps by the early 1990s. The mass internment of their own people is nothing new. Today, Xinjiang reeducation camps are brimming with more than 1 million (and perhaps up to 3 million) ethnic Muslim Uighurs.

There has never been religious freedom in communist China. Catholics, Falun Gong, Buddhists, Muslims and others have been harassed, thrown into prison, tortured and forced to renounce their beliefs and adopt the state-sponsored faiths of Maoism and atheism.

Even in the latter years of the 20th century, the communists would continue a policy of family destruction through forced abortion, mandatory sterilization and the discouragement of adoption, resulting in the abandonment of an estimated 2 million children, mostly girls.

Let's not forget the Chinese communists also exported their malicious ideology. After 1950, the communists murdered somewhere between 10% and 20% of the Tibetan population -- many of whom bravely fought against the Red Army with muskets and swords. In 1984, the Dalai Lama estimated that, to that point, 173,000 of his countrymen had died in captivity. Tibet is still occupied territory but is little advocating for its cause on college campuses or in the U.N.

We won't even dive into the murderous communist regimes Red China propped up in Cambodia or Vietnam or how it instigated world conflict and cost hundreds of thousands of lives. But let's remember that China still props up the massive concentration camp known as North Korea -- not to mention that, all the time, the vast majority of Chinese lived in poverty.

The free capitalistic enclaves of Taiwan and Hong Kong would be constant reminders of both the amazing ingenuity of the Chinese people and the crimes of China's government. Even today, the brave protesters in Hong Kong won't relent to the communists' arbitrary rule. They deserve more from us.

In an age in which some Americans act as if losing an election is tantamount to totalitarianism, the staggering death and poverty caused by the People's Republic of China can be difficult to wrap one's mind around. Reading the history of China's regime, which is taking an excruciatingly long time to wind down, even as capitalism takes hold, is numbing in its unremitting inhumanity.

Yet, this week, "President" Xi Jinping and other Chinese officials visited Mao's mausoleum -- located in Tiananmen Square, where thousands of protesters were murdered by the state in 1989 -- and bowed three times to embalmed remains of the world's greatest mass murderer. It will be a day worth celebrating when the rest of the Chinese government meets the same fate.