David Harsanyi
|
Posted: Jul 19, 2019 12:01 AM
Share   Tweet
The opinions expressed by columnists are their own and do not necessarily represent the views of Townhall.com. 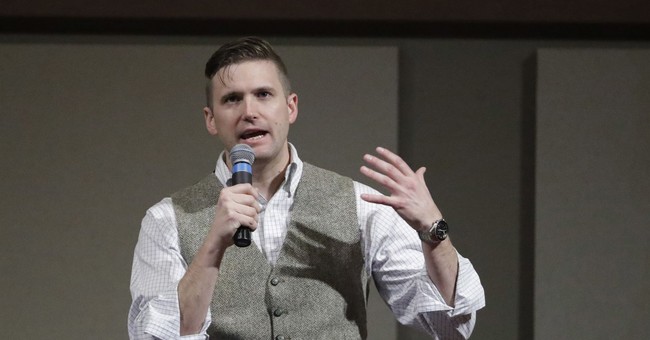 In 2016, a bunch of real-life white supremacists -- not just Republicans who happen to disagree with the Democrats' preferred immigration policy -- put together a conference in Washington, D.C., to attract attention. All kinds of major news networks dutifully showed up, because legacy media has something of a symbiotic relationship with the alt-right. White supremacists get to feed off of the preposterously outsized coverage they are given by histrionic journalists while journalists get to use white nationalists to smear Republicans.

In its report on the conference, NPR -- which made sure to note what was implicit in most coverage: the Republican victory had given this once-fringe movement a "jolt" -- noted that maybe 300 people, "split nearly evenly between conference attendees and protesters of the conference outside" had been on hand for the event. So maybe 150 people. To put this in perspective, there was -- by far -- more coverage of this idiotic get-together than there has ever been given to the March for Life, which pulls hundreds of thousands of people every year, or even this week's progressive Netroots Nation, which, inconveniently, featured both elected Democrats and anti-Semites -- sometimes simultaneously.

This kind of journalistic malpractice is just an upcycled version of one of those pieces lamenting the imaginary racist backlash against Disney remakes that, in actuality, amounts to nothing more than some random Twitter trolls.

All of it caters to historical illiterates and partisans who act like every tax cut is another Reichstag fire.

Which brings me to the purpose of CNN featuring white supremacist Richard Spencer on as a pundit yesterday. These are kinds of people, you see, who say "love it or leave it." These are the kinds of people who support the president. Literally, the chyron read, "White Nationalist who once backed Trump calls Trump's racist tweets 'red meat.'"

Spencer was there to reiterate a point. CNN and other networks have decided that Trump's tweets are objectively racist and they will repeat that his tweets are racist hundreds of times a day just in case anyone disagrees. They won't make the same kind of journalistic judgments about the anti-Semitism that infects a sizable faction of the progressive left. They won't do the same for Ilhan Omar's tweets.

There are plenty of articulate conservatives out there who don't meltdown every time the president tweets something stupid. Whether you agree with them or not, they could easily have provided a pro-Trump perspective (which is what I imagine CNN was looking for but didn't get, from Spencer).

Because there are basically two varieties of right-center guests that dominate these news shows. One is a centrist who is perpetually dismayed by what's happened to the modern Republican Party. When it was Reagan, he pined for Eisenhower. When it was W., he pined for H.W. Now that it's Trump, he pines for Reagan. The second is a cartoon avatar of what liberals imagine most Republicans are like. Basically, "Let's go down to CPAC and find the biggest nut we can." Guess what? It's not hard to find a nut.

"Does a figure like Spencer disappear into the darkness when news outlets pretend he's not there?" asked CNN's Brian Stelter. Couldn't the same be said about Alex Jones or any of the ugly conspiracy theorists that he and the other media pundit over at CNN were crusading to de-platform? CNN has taken the same kind of demagogue and put him on their news network -- a network that doesn't even pretend to be an open platform for millions of users, but one that chooses only a handful of guests every day to feature.

Moreover, Stelter's argument is risible because Spencer wasn't on CNN to respond to an investigation into the Nazi movement or some kind of journalistic venture meant to remind us he is "there." The interview was about Trump.

But to answer to Stelter's question: Yes. White nationalists have no genuine political power or support in this country. They are a fringe movement that sometimes resorts to violence and harassment, not a political entity with any legitimate power in American life. We should be thankful that very few people know who Spencer is -- no thanks to CNN. Then again, no one does more to normalize these people than the media. And the reasons are transparently partisan.