If David Duke Won, Wouldn't Republicans Have to Vote for Him?

David Harsanyi
|
Posted: Jul 29, 2016 12:01 AM
Share   Tweet
The opinions expressed by columnists are their own and do not necessarily represent the views of Townhall.com. 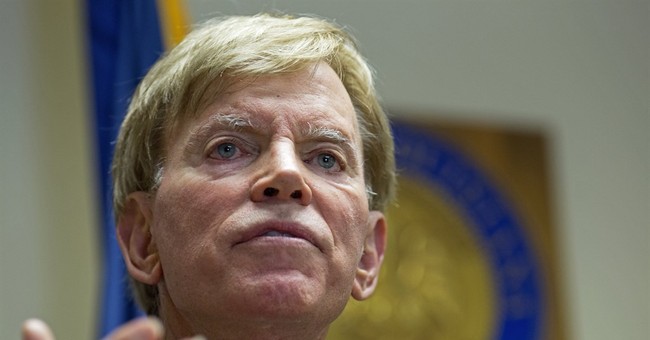 Trending
When David Duke announced last week that he would be running for Senate in Louisiana, GOP Chairman Reince Priebus swiftly sent out a tweet assuring America that the former Ku Klux Klan grand wizard's "hateful bigotry [has] no place in the Republican Party & the RNC will never support his candidacy under any circumstance."

No major party should ever consider supporting a candidate with a long history of vile bigotry -- even if the candidate had a shot at winning the race. But the argument itself doesn't really mesh with what Priebus and others have been telling me this election cycle.

What if there were a large field of GOP presidential candidates and, due to a confluence of events, someone like Duke fairly captured the Republican nomination? Would conservatives cast their votes for him in the general over someone as disagreeable as Hillary Clinton? I mean, you all know how terrible she is!

What if Duke promised to nominate conservative Supreme Court justices? Let's say he drew up an extensive list of Federalist Society-approved justices who conservatives simply loved? Would they vote for him then? RNC spokesman Sean Spicer says no. Please don't tell me you're willing to surrender the court to a progressive agenda for a generation. If you don't vote for Duke it would be tantamount to abandoning law and order. As pro-Trump Republicans often stress, national elections are a binary choice.

It's not just about justices, either. Duke would almost certainly build an impenetrable wall along the Mexican border to stop the flow of illegal immigration. Duke would promise to dismantle sanctuary cities. This would, I've been assured, save American lives and livelihoods. Polls show that most Republicans desire a more secure border. So what if he says some shocking things about Jews and African-Americans from time to time?

Duke would also limit Islamic immigration to keep America safe again. Duke would shut down "unfair" trade agreements with Mexico, China and others -- deals that purportedly cost millions of American jobs and destroy our manufacturing base. Duke might even pull out of the unfair World Trade Organization and punish unpatriotic companies that move their headquarters abroad.

On foreign policy, he would demand that the Baltic states pay up. If not he would leave their fate to the whims of an autocratic Russia. Duke would rein in American involvement in the Middle East and Asia. Duke opposed the Iraq War, which, according to Trump, makes him one of the leading foreign-policy experts in the nation.

These issues are the main thrust of Trumpism, the positions that rouse the base and distinguish the billionaire from a lily-livered GOP that has failed its constituency for the past 30 years.

You know elitists would simply hate Duke, probably because the Klansman refuses to be constrained by political correctness. And if shunning political correctness is, in and of itself, a position worth celebrating in a candidate, Trump is a mere piker in comparison. Why not put the resources of the RNC behind someone who can discuss white working-class struggles in even starker terms? Americans are mad. They are scared. Duke will fight for them.

Let's also not forget that Duke is not indebted to Wall Street or big donors like Mitt Romney. He does not answer to lobbyists like Jeb Bush. He is not an ordinary politician like Marco Rubio. He does not play by the rules. Shouldn't this be enough?

Duke also won the primary process fair and square. Wouldn't Republicans be obligated to support him? Doesn't the "will of the people" transcend the piddling concerns of the sore losers? Isn't opposing the will of the majority tantamount to being a traitor to your cause? According to some of Trump's greatest allies in the Republican Party, imploring people to vote their conscience is now a "chilling" display of nonconformity. What could possibly be more important than the unification of a political party?

No, I'm not arguing that Trump's aims and positions are indistinguishable from Duke's. The Republican nominee has already rebuked Duke "as quick as you can say it." If Trump's positions and disposition please you, feel free to support him. What I am contending is that arguments made by Trump's Republican allies meant to convince recalcitrant conservatives to vote for him are vacuous logical fallacies.

Is David Duke preferable to Hillary Clinton? At this point -- although I'd be somewhat nervous to hear the polling results -- I suspect a large majority of Republicans would contend that he's not. If this is true it's because, to one extent or another, even partisans are forced to make moral calculations about the worthiness of candidates. In scale, Trump is not David Duke. But let's stop pretending that an election is always a simple choice.