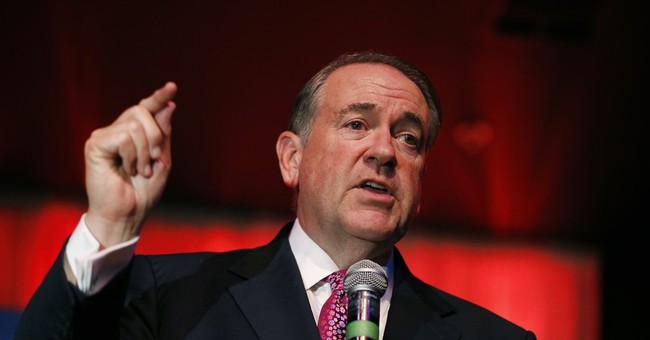 Trending
In an interview with Breitbart News, Mike Huckabee accused President Barack Obama of being "naive" for trusting Iran to uphold its part of the recent agreement struck by the nations.

By doing so, Huckabee said, Obama is marching Israelis "to the door of the oven."

The Anti-Defamation League, self-proclaimed guardians of (imaginary) Jewish values, swiftly denounced Huckabee's language. Political reporters sprinted to the nearest Democrat to gauge exactly how offended Americans should all be. Huckabee was invited to appear on a bunch of TV and radio shows so that hosts could nudge him into expressing something even more disagreeable (as if such a thing were possible).

MSNBC's Mika Brzezinski teed up a little emotional sermon of her own:

"If you've been to Auschwitz, if you've been to Birkenau, if you've been to any of these places where people were killed and you see the piles of glasses, the piles of hair, the piles of shoes and the piles of clothes and every bit of their humanity that had to be stripped away, handed over, as they went and then burned to their deaths, among other things, it's really not a good comment to say. It's a deal breaker! It should be over for him. You don't say that. And by the way, if you said it by mistake, that's a sign of who you really are."

You know what else people don't do by mistake? Work on a deal for years that enriches and emboldens Iranian ambitions -- and puts Jewish lives in danger. That, too, no doubt, tells us something about who people really are. Yes, Birkenau is a reminder of a depraved regime. But there are contemporary regimes that are similarly depraved -- even if they lack comparable technical and industrial skills. For now.

So for some of us who grew up with survivors, it is a bit disconcerting that folks such as Brzezinski are more outraged by the offhand remarks of a powerless, attention-seeking second-tier GOP candidate than they are by the most powerful leader on earth's abetting Iranians' objective of placing themselves on the threshold of nuclear weapons. In a study by Bar-Ilan professors, we find that adult children of Holocaust survivors are more concerned about the threat of a nuclear Iran than those whose parents were not survivors.

But this is par for the course. Huckabee is a gift to an Obamaphilic media, allowing them to emote, grandstand and distract. Look! He's out-Trumping Donald Trump! Admittedly, I have no way to precisely quantify this next assertion, but there is almost no way that the media have spent as much time contemplating the horrendous details of the Iran deal as they have gawking over Huckabee the past few days. How many of the voters now familiar with Huckabee's comment understand that there is a secret side deal between the International Atomic Energy Agency and Tehran? How many Americans outraged by Huckabee's comment know that the IAEA will rely on Iran to collect samples at one of its military bases? Do they know that we will give the Iranian regime hundreds of billions of dollars to fund Hamas and Hezbollah -- organizations that aren't squeamish about expressing their views on a second Holocaust?

As many other anti-Semites do, the Iranian government has denied that 6 million Jews were exterminated in Europe, in an attempt to weaken the case for Zionism and the need for a Jewish homeland. The idea that Jews have a duty to pre-emptively defend themselves when threatened is predicated on this recent history, and Iranian mullahs know it. Nowadays, the mullahs threaten in various ways to bring about a second Holocaust. And the same administration that trusts Iran to uphold its end of an agreement doesn't believe that Iran is earnest about its project to destroy the Jewish state.

Huckabee's remark was unhelpful in the way that conjuring up the Holocaust to make political points always is predictably unhelpful -- even if, believe it or not, there are events that are historically analogous. Accusing the president of marching Jews "to the door of the oven" suggests that the president is interested in starting genocide on purpose, as opposed to suggesting that he is gullible or incompetent or subscribing to a dangerous philosophy when it comes to the Middle East. Ultimately, though, Huckabee is wrong about one other thing: Jews can't be marched to the doors of an oven anymore. That's the point of Israel. And that's why this deal may facilitate a war. But don't let that get in the way of focusing on what's important, media.