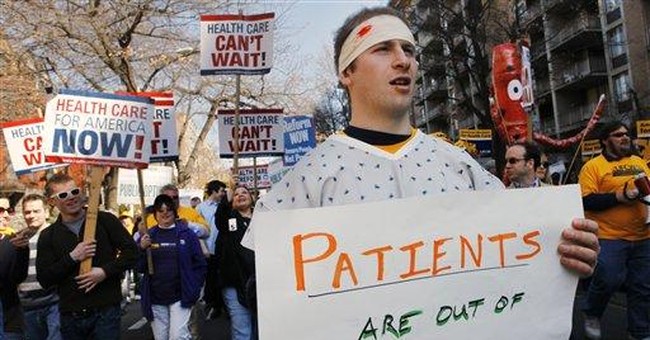 There seems to be growing optimism among some Republicans that if House Speaker Nancy Pelosi finagles the votes to pass Obamacare, the GOP triumphantly will sweep into power and immediately repeal it.

Though short-term GOP gains are almost certain, there are numerous problems with this kind of quixotic thinking.

To begin with, there exists almost no historical evidence to suggest Republicans will possess either the fortitude or the power to undo a massive government entitlement program.

Can we trust them? Most of you will remember it was the Republican Party's leadership that pressured conservatives to vote for the fiscally irresponsible Medicare Part D program in 2003. (Democrats like to argue that this illustrates GOP hypocrisy. Perhaps. With Obamacare, the GOP has a chance at redemption.)

Then there are conspicuous problems to consider. Republicans do not possess 60 votes in the Senate -- and likely won't for a while. Best-case scenario: They will have to deal with a president who will veto their efforts to undo the sole "accomplishment" of his presidency.

Obama spent last week campaigning for health care reform, at one point getting some college-age fans worked up about all the free stuff -- "free" preventive care and "free" checkups and so forth -- they would receive if his version of health care reform passed.

Which brings us to another stumbling block. If health care is now a "right" and "free" to an ever-growing group of Americans -- people who believe stuff can be had for "free" -- are Republicans really going to snatch it away from them?

You can picture the hideous debate already, as Republicans fold in the face of accusations that they are working for the murderous profit-mongers against the underprivileged victims of a wretched capitalistic system. (Even today, Jim Bunning stood nearly alone.)

Admittedly, the GOP also has a few things going for it.

If enacted, perhaps no other major federal program will have been more unpopular with the American people. A new Rasmussen survey claims only 25 percent of Americans believe Obamacare would "help the U.S. economy." Fifty percent of the nation believes it would hurt the economy, and 78 percent of those polled believe the middle class would be paying the bill.

Sixty-six percent of Americans believe the plan would increase the federal deficit, and 10 percent, apparently, will believe anything.

Republicans are now also free to unsheathe a seldom-used weapon to push through legislation. The Democrats have already made the case that ignoring committee hearings and relying on unilateral parliamentary tricks -- despite the objections of the lowly proles -- is acceptable, as long as you deem a bill important enough.

Republicans also have the advantage of utilizing the Democrats' own deception on cost estimates.

Most of the imagined benefits of Obamacare would not kick in until 2014, so Republicans have a few years' cushion to move forward as seniors lose their Medicare Advantage program and taxes begin to rise along with premiums.

But none of that can erase history. Once government infiltrates, it rarely retreats. There are precious few examples of federal programs shirking rather than growing -- most often in extraordinary ways.

Perhaps a re-branded Republican Party will be able to deflect the emotionalism of liberal arguments and reject the lure of spending, though the past decade hasn't exactly inspired confidence.

Soon enough, we'll find out whether the GOP has transformed into a party that matches its rhetoric. But repealing Obamacare? That's a tall order.