Don't Do It; You're Perfect Already 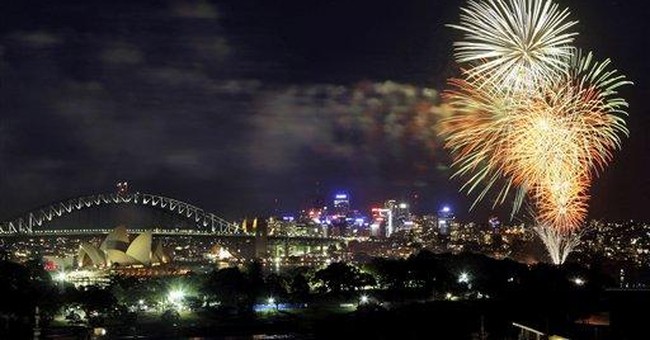 Each year, on or around Jan. 1, a substantial number of reasonable Americans embark on the futile task of pledging to eliminate one toxic activity or another from their lives. Don't. You're already perfect.

It should be noted that though a large number of you plan to make New Year's resolutions, around 60 percent of Americans say they are likely not to make any changes in 2009, according to a Marist Poll taken on this pressing issue. For now, that's your choice.

Like me, many of you will remain ornery, self-obsessed, unhealthy, consumer-driven, gluttonous, idiot-box watching troglodytes, as is your right in this, the freest nation on Earth. Better yet, you will inadvertently take a stand against the increasingly powerful Church of the Holy Salubriousness and Immaculate Safety -- otherwise known as your government.

There is a trend in this nation, one that insists on mass "nudging" in the name of public welfare. Americans, the thought goes, will drop bad habits if we punish them for their choices. If we raise gas taxes, they will drive the right kinds of cars. If we make soda cost as much as gold, people will stop being such fat slobs. Nirvana through social engineering!

Each new year, the most common promise American make to themselves is to lose weight. Some of us need it. Yet, many of us have fallen for the incessant war against fat (and against those of us who teeter on the edge of stoutness) or the "obesity epidemic" -- a world where eating a Big Mac or a taco is the moral equivalent of sucking down the smolder from crack cocaine.

The way things are going, corpulence will soon be declared a crime against humanity. Politicians across the country are already demanding, and sometimes instituting, restaurant portion limits, sin taxes, soda bans and health zones (burger-free zones) in an attempt to nudge, implore, nag and convince us that looking like Michael Phelps is helpful to anyone.

Coming in second, there is smoking, which 16 percent of you pledge to quit this year. There is no government mandate for journalists to warn citizens about the potentially hideous repercussions of this habit -- at least, not yet. Everyone else, it seems, must.

Private property rights? The right to assemble peacefully? Who cares? Nothing matters when it comes to stamping out the Devil's weed.

When Hillary Clinton banned smoking in the White House in 1997 -- a house built by Thomas Jefferson, no less -- it became just another place where free citizens could no longer partake in a legal habit, not even the president of the United States (though cigars, apparently, were permissible.)

Now, poor Barack Obama has been subjected to a thousand wagging fingers. Journalists have dug deep to uncover the president-elect's nefarious 3-cigarette-a-day habit. Quit, for your own good, Mr. Obama, because those ruthless Iranian mullahs are pussycats compared to these indefatigable health stormtroopers I mean "activists."

Meanwhile, I'll be making only one, completely horrifying, resolution this year. Not only do I plan to regularly eat cheap, salt-infested, cheese-drenched meat products, but I plan on washing them down with various brands of needlessly sugary beverages.

Or, I may even drive my car a extra few miles when in Oregon, even after that state passes an Orwellian measure that tracks me with a GPS system to tax my mileage and induce me to take a train.

Or I may head to Massachusetts and buy a blunt-tipped cigar, which are now banned. Maybe a trip to Atlanta in some loose-fitting slacks. There is talk that they may be banned. When in New York, I may have a soda pop before sin taxes put it out of my price range.

This year may be my last chance.