The Lighter Side of the Election Battle 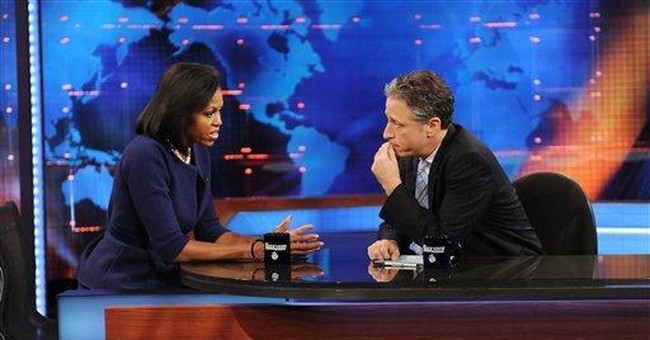 At the height of the 1968 presidential campaign, Richard Nixon appeared on the hit show "Rowan & Martin's Laugh-In" and, in a flash of pop culture history, asked, "Sock it to me?"

"Laugh-In" featured a running bit during which guests and cast members were tricked into saying "sock it to me" and then were drenched with water or assaulted in some other undignified manner. To the chagrin of many viewers, no doubt, Nixon escaped this fate.

The country, sadly, did not.

"Then, realizing what we had done -- because he did come out looking like a nice guy -- we pursued (Nixon's opponent Hubert) Humphrey all over the country trying to get him to say, 'I'll sock it to you, Dick!'" the producer of "Laugh-In" later told The New Yorker. "And Humphrey later said that not doing it may have cost him the election."

It's improbable that an inane variety show appearance could cost a presidential candidate the race -- at least, we hope not. Yet some genius in Washington realized that if Nixon could be funny, hey, anyone could do it. So now we live in a world where politicians seek to be mocked and humiliated for the gratification of the electorate.

No, I'm not complaining.

Twenty years ago, David Letterman hosted a counterculture mash-up of arid humor to a relatively small audience at 1 in the morning. These days, if John McCain misses a show, he is accosted mercilessly until he apologizes for the slight.

Can anyone imagine Dwight D. Eisenhower begging for a guest spot on "Howdy Doody"?

How else can a modern candidate be humanized? The average American will tell you it is nearly impossible to extract any sense of a person through the recrimination, character assassination and mendacity that we call a presidential campaign. Political humor, then, is a national release -- nay, a national necessity.

Thankfully, the burden of the democratic process has been lessened with a renaissance in satire.

We have "The Colbert Report," "The Daily Show" (according to the Pew Research Center, Jon Stewart is one of the most trusted names in journalism), viral videos, political cartoons and perhaps the most satisfying, "Saturday Night Live."

When vice presidential candidate Sarah Palin appeared on "Saturday Night Live" last week, she garnered higher ratings for the show than anyone has since figure skater Nancy Kerrigan appeared in 1994. Nancy Kerrigan. Can you imagine?

Watching comedic actor Alec Baldwin "mistake" Palin for Tina Fey and question Lorne Michaels about how they ever could have someone such as Palin on the show was a joy, both in its humor and honesty. When Baldwin realized his "mistake," he said: "I see. Uh, forgive me, but I feel I must say this: You are way hotter in person."

It's a long way from watching then-candidate Bill Clinton innocently play that insufferable saxophone on "The Arsenio Hall Show" in 1992. And who can deny Bob Dole, Clinton's 1996 opponent, was more likeable as a parody of Bob Dole than as Bob Dole himself?

When Obama and McCain recently met at the Waldorf-Astoria to raise money for deprived children, they took time off from the campaign to crack jokes.

"There are signs of hope, even in the most unexpected places, even in this room full of proud Manhattan Democrats," said McCain. "I can't shake that feeling that some people here are pulling for me. I'm delighted to see you here tonight, Hillary!"

When offering levity, McCain has been at his best this campaign. Such moments can inject politics with humility and humanity.

Recently, my editor good-naturedly challenged me to write a single positive column about this horrid campaign. Well, here it is: Be thankful that it isn't always so dreadfully serious.

Not to mention, it all will be over soon enough.