Teddy and Trump: Old West Sheriffs in the White House

Daniel Ruddy
|
Posted: Jul 24, 2016 12:01 AM
Share   Tweet
The opinions expressed by columnists are their own and do not necessarily represent the views of Townhall.com. 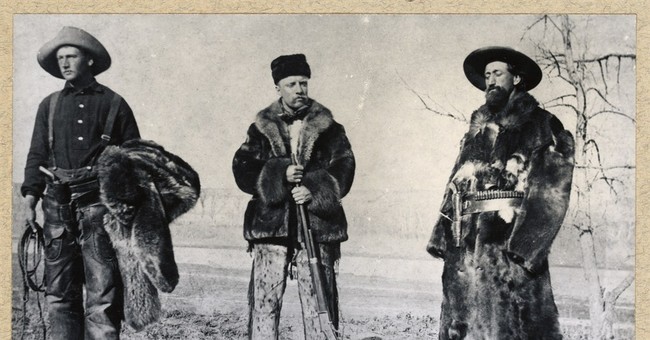 When Donald Trump declared himself the “law and order” candidate after the horrific murder of police officers in Dallas and Baton Rouge he was unconsciously channeling Theodore Roosevelt, who is perhaps the greatest “law and order” president in American history. In recent years, TR has been vilified by some right wing pundits as a sinister “progressive.” In truth, he was a no-nonsense conservative, a hardheaded realist who had zero tolerance for violent agitators.

From his denunciation of the Governor of Illinois, John Altgeld, for pardoning anarchist bombers who triggered the infamous Haymarket labor riot in 1885, to his enthusiastic support for President Grover Cleveland’s use of the U.S. Army to put down the Pullman Strike in 1895, TR consistently supported aggressive means to stamp out and prevent civil unrest. As President of the United States, he believed it was his duty to use whatever means necessary to maintain societal order. There can be no doubt that he would have used the military to quell domestic disturbances during his presidential administration if the need had arisen, as plainly shown by his order to General Scofield in 1902 to use the U.S. Army to end the Anthracite Coal Strike if a peaceful settlement could not be reached in the labor dispute.

Not surprisingly, “police” was one of TR’s favorite words. He used it most famously in 1904 when he announced that the United States would henceforth become the “policeman” of the Western hemisphere, that it would “spank” disorderly Latin American nations that “misbehaved.” The news of this extraordinary “Roosevelt Corollary” to the Monroe Doctrine produced howls of outrage among the nation’s liberals that the paternalistic decree was insensitive to the feelings of the people who lived south of the border. TR brushed aside the criticism. He feared that if the United States did not exercise hegemonic control over Latin America that European powers (especially Germany) would fill the power void and begin to carve colonies out of South America just as they had carved up Africa during the previous generation.

The enthusiasm TR showed during his presidency for “policing” those who “misbehaved” was evident early in his career. During the mid-1880s, when he was not yet 30 years old, he appointed himself “Deputy Sheriff” of the territory around his cattle ranch in the Dakota Badlands and quickly showed that it was much more than a paper title, tracking down and bringing to justice horse thieves in a dramatic incident that he made sure the nation’s newspapers noticed. Possessing a genius for self-promotion rivaled in our own day only by Donald Trump, he often used flamboyant “police” actions like this to shine the spotlight on himself so that the American people would see him as a heroic foe of criminality in all its forms.

TR saw himself as a Sheriff of the Old West—a throwback to the rough-and-ready lawmen who had administered frontier justice with a cool head and a loaded gun before civilization spread itself over the continent. Once he reached the White House, he went out of his way to give Bat Masterson (the Sheriff of Dodge City), Pat Garrett (the lawman who killed Billy the Kid) and Seth Bullock (the Sheriff who cleaned up Deadwood) government jobs, declaring that they “correspond to those Vikings, like Hastings and Rollo, who finally served the cause of civilization.” He understood that his Old West heroes had sometimes violated the letter of the law in order to keep the peace, but he forgave their transgressions as the sensible conduct of righteous men.

During TR’s time as Police Commissioner of New York City (1895-1897) he acted in the spirit of these grim lawmen of the Old West, cracking down on crime and vice in unprecedented fashion. He started with his own police force, taking to the city’s streets after midnight to catch police officers sleeping on the job. Next, he enforced the so-called “Raines Law,” which prohibited saloons from selling alcohol on Sundays. The controversial action infuriated the city’s large alcohol consuming population, especially German-Americans involved with the brewing industry and “Tammany Hall” Democrats, who used their control of the police to operate an extortion racket that extracted financial kickbacks from saloon owners, who were allowed to open for business on Sunday if they paid off the local Tammany machine boss.

Enforcing laws that others ignored was one of the principal drivers of TR’s career, helping him make newspaper headlines and bolster his image as a corruption fighter. He was in many respects the Eliot Ness of his day—incorruptible and indefatigable in his determination to take down the bad guys. As a U.S. Civil Service Commissioner between 1889 and 1893 he even defied his boss, President Benjamin Harrison, by insisting that the Pendleton Act (which Congress had enacted to curtail the “spoils system”) must be enforced. When Harrison refused to fully enforce the law (he needed the “spoils system” fully operational to win re-election), TR took his case directly to the American people, engaging in a nasty public feud with the chief “spoils-man” of the Harrison administration, Postmaster General John Wanamaker.

If Theodore Roosevelt were alive today, he would burst a blood vessel in anger over the murder of police officers in Dallas and Baton Rouge. After all, he was one of their fraternity—a Wyatt Earp in spirit who saw the world as an unruly and dangerous Old West town, a Tombstone that needed to be cleaned up and kept peaceful under the gaze of a steely-eyed lawman like himself who was willing to draw his gun if needed to maintain civilization. Fittingly, he carried a concealed revolver on his person during his presidency, making him perhaps the only Commander-in-Chief to arm himself with a loaded gun while in the White House and definitely the last.