Daniel Gade
|
Posted: Oct 27, 2021 12:01 AM
Share   Tweet
The opinions expressed by columnists are their own and do not necessarily represent the views of Townhall.com. 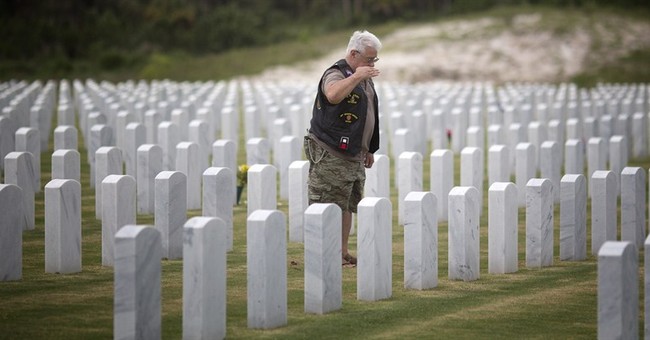 Amid the chaos of the final US withdrawal from Afghanistan, commentators from across the political spectrum have lamented the abandonment of our Afghan allies, many of whom served critical roles in our military’s mission. Many have also reiterated the commitment to honor our veterans from the twenty-year Global War on Terror. President Biden explicitly said as much in his address to the nation on August 31: “The cost of war they will carry with them their whole lives [sic].”

Unfortunately, America has already abandoned its veterans—though not in the way most people may think. By any measure, we give more to our veterans than we ever have before. Over the past 20 years, the VA’s benefits spending has multiplied almost five-fold to $138 billion—more than triple the combined value of Delta and American Airlines—even while the number of living US veterans fell from 26.4 million to 18 million. All the while, thousands of non-profits have filled the gaps, demonstrating with dollars donated, hours volunteered, and flags waved that there really is a “sea of goodwill” for veterans in the hearts of the American people. Yet the abandonment that afflicts US veterans is real, pernicious, and widespread, and the organizations claiming to be their loudest advocates are often making it worse.

Far too often, young veterans leaving the service are labeled with a permanent “disability” label for treatable, transient, or minor conditions. The system that is designed to heal them—the VA’s health care system—is by many measures the best integrated healthcare systems in the country. Yet it can only be accessed through the disability system, which literally pays veterans to be sick and pays them more the sicker that they can present themselves to be. Minor conditions—tinnitus, knee pain, sleep apnea, and more—are stacked together in order to achieve a “100% permanent and total” disability rating, which pays out approximately $3000 in tax-free monthly benefits from the VA. At the same time, comparatively little emphasis is given to helping rehabilitate ailing veterans. Worse still, treatable mental health disorders like PTSD are labeled as permanent—and compensated as such—without any requirement for vets to seek treatment for their diagnosis.

For years, the VA disability system has been assessed by the Government Accountability Office and other watchdog organizations to be at “high risk” for fraud, waste, and abuse. Yet policymakers are too often afraid to confront the truth of the matter: that the VA system incentivizes illness, malaise, and disability, causing our veterans to leave the labor market early and shunting them into lives that are sicker, poorer, and worse off.

The American people love our veterans. We love parades and flags and the remote heroism that we read about in the paper. This adoration of the military, filtered through a polarized political system, makes these problems worse. The political left essentially believes that all veterans are casualties of a misguided, militaristic system, while the political right believes that every person who ever put on a uniform is a hero regardless of the quality of their service. Unfortunately, veterans themselves—dating as far back as the post-Civil War period—have banded together to perpetuate these perceptions and lobby for increasing entitlements.

Make no mistake: our indulgence of such largesse is not compassion, or duty, or relief. It is abandonment. When a 24-year-old is told that he is permanently and totally disabled rather than being guided onto the worthwhile path of recovery, he has been abandoned.

Our veterans deserve more. Instead of getting sucked into the disability tornado, they deserve a real chance at rehabilitation. We should stand behind a VA system that incentivizes the behaviors which benefit veterans in the long term, ensuring that they are provided with every opportunity to re-skill, up-skill, or transition between career fields within a warm and supportive environment. We should stop pretending that minor conditions—as much borne from the tolls of daily life than from military service—are “disabilities” and that every veteran is entitled to every monetary benefit he or she might covet.

Perhaps, with this pause in our wars overseas, we can rethink how we approach caring for our veterans, so that this generation will not be abandoned to the false solace of disability compensation that too many have already fallen into.